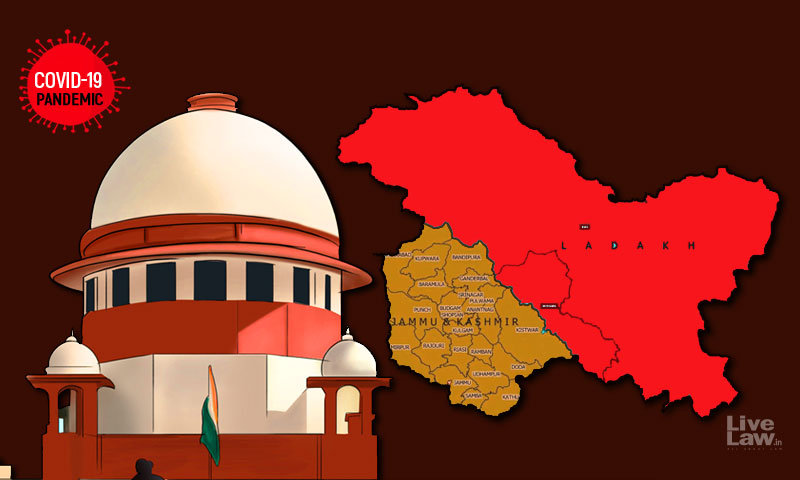 The Government of J&K has filed a note in the plea seeking for restoration of 4G mobile internet services in the Union Territory of J&K in light of the prevailing COVID-19 pandemic. The note places on record additional facts on behalf of the Respondent. Accordingly, the Petitioners have filed their responses to the same. On 29th April, the Government of J&K had filed its reply...

The Government of J&K has filed a note in the plea seeking for restoration of 4G mobile internet services in the Union Territory of J&K in light of the prevailing COVID-19 pandemic. The note places on record additional facts on behalf of the Respondent. Accordingly, the Petitioners have filed their responses to the same.

On 29th April, the Government of J&K had filed its reply in the plea, averring that the contentions of the Petitioners regarding "alleged deprivation of access to education, health care facilities/updates" were incorrect as the administration was taking all possible steps to mitigate the impact of COVID-19. The Reply further opposed the lifting of the restrictions, stating that the internet could be used to propagate modern terrorism.

On 4th May, the Supreme Court heard the arguments submitted by Senior Advocates Salman Khurshid and Huzefa Ahmadi on behalf of the Petitioners, Soayib Qureshi as petitioner-in-person and Attorney-General KK Venugopal and Solicitor-General Tushar Mehta on behalf of the Respondents, and reserved order.

NOTE FILED BY GOVERNMENT OF JAMMU AND KASHMIR

The Government of J&K has sought the liberty of the Court to place on record additional facts to highlight "how the medium of internet has been and still is being used in a minacious manner from across the border for inter alia, infiltration from across LOC, indoctrination/incitement of gullible youth and for destabilizing the country, putting the sovereignty and security of the State at stake".

The Note purports to emphasize the submission that there has been an upswing of terrorist activities in the last few days, by specifically referring to the attacks on CRPF personnel who had set up nakas for control of COVID-19, as well as the encounter with terrorists in Handwara which led to the death of 5 officers.

"Since 26th April, 2020, 11 instances have taken place in which 10 terrorists have been killed while 8 number of brave officers and jawan belonging to the security forces of our country have been martyred".

The details of the terrorists' incidents have been annexed, with an "Assessment" stating that "a series of inputs have come from multiple quarters suggesting possibility of infiltration across LOC. The terrorist outfit TRF has floated online warnings to carry on a spurt of attacks on security forces as well as select non-combatant targets. Terrorists of HM have also floated a hit list of soft targets who they are planning to eliminate in coming days. The month of Ramazan has especially been favourite with terrorists to further their nefarious designs; the anniversary of battle of Badr falling on May 11."

It has also been averred in the Note that in the recent month, there has been "a bulge in radical content and terror activities, and there are apprehensions of increase in terror recruitment" with a newly launched terrorist organization by the name of The Resistance Front (TRF) flooding social media with videos in order to incite the youth/general public and to attain support from across the border.

The Note concludes with a reference to an article published on 27th April by The Print, which is based upon Green Book 2020 which is published by the Pakistan Army and features essays by serving officers. It is contended in the Note that the Green Book calls for "information warfare on Kashmir, taking the war into non-kinetic domains information/cyber warfare and Electronic Warfare (EW)".

RESPONSE ON BEHALF OF PETITIONER IN THE MATTER OF FOUNDATION FOR MEDIA PROFESSIONALS v. UNION TERRITORY OF JAMMU AND KASHMIR & ANR.

At the outset, the Response, filed by Advocate-on-Record Shadan Farasat and the legal team at Internet Freedom Foundation (IFF), states that the Apex Court had orally rejected the request of the Respondent to file written submissions, and despite the express refusal, the Respondent has filed the Note placing additional facts before the Court, that too without an application to file additional materials or an Affidavit.

It is further submitted that the Note fails to take into contention that the restrictions placed on the internet services violates the following rights of the people of Jammu and Kashmir:

1. Right to Health under Article 21 due to the inability of the people and doctors to access medical information.

2. Right to Education under Article 21A read with Article 14 due to inability of children to access information and attend online education classes.

3. Right to an Occupation/Profession and Right to Livelihood under Article 19(1)(g) and Article 21 due to inability of citizens to work from home.

4. Right to Access Information and Videos by journalists in real time, which is a violation of Article 19(1)(a).

5. Additionally, the inability of citizens to download the Aarogya Setu App, if they desire, and their inability to connect with their friends and family through video calls and access all forms of information and recreation.

The Response further submits that the facts that are sought to be brought on record by the Note do not establish that "a restriction of the internet speed to 2G is suitable, necessary or proportionate in light of the COVID-19 pandemic". It is contended that the burden of establishing that the restriction on the internet is proportionate to the object of preserving national security lies upon the Respondent, and that a mere bald assertion that 'the medium of internet is being used by forces across the border for (a) infiltration, and (b) indoctrination/incitement" cannot be used to justify the continued denial of 4G internet.

While the Response states that the Petitioner joins the Respondent in condemning all acts of terrorism and supports the State in its fight against terrorism, however, it is submitted that the facts brought on record by the Respondent support the contention of the Petitioner that the restriction of internet speed is not suitable for the State's aim to prevent terrorist attacks as the incidents recorded had taken place while the internet speed was restricted to 2G.

The Note implies that the restrictions can never be done away with until and unless the threat of terrorism is neutralized, and therefore, it is stated in that Response that in order to contain terrorist activities, orders for suspension must be tailored in their territorial scope and time duration as a blanket restriction effectively treats citizens who have nothing to do with terrorists or terrorism as "collateral damage" by "compelling them to forego their fundamental rights (in the midst of a lockdown and a global pandemic) because of terrorist actions that they are neither responsible for, nor sympathise with".

"This consequence goes against the Telecom Suspension Rules, 2017 as well as the spirit of this Hon'ble Court's judgement in Anuradha Bhasin v. Union of India (2020) SCC OnLine SC 25 which envisages that restrictions on the internet are not indefinite but temporary and in response to urgent or emergency situations and restricted in their territorial scope".

The Response also alludes to the observation that restricted internet can also lead to the government's inability to win the struggle against terrorism as "while propaganda may be spread on the internet, the internet is an equally important medium to swiftly check propaganda and misinformation among impressionable youth".

The restrictions on the Internet cannot merely be utilized to only contain a "miniscule minority population of militants or persons who are likely to be influenced by propaganda, but must also address the needs of a large civilian population that require the internet as a public utility…". Additionally, the Respondent also fails to justify why a less restrictive measure of targeted blocking of website/applications has not been employed, instead of the blanket restrictions.

The Response concludes with the following submissions:

1. The impugned orders do not have the sanction of law as they are ultra vires Rules 2(2), 2(5) and 2(6) of the Telecom Suspension Rules.

2. With regard to proportionality:

(i) There is no rational nexus between the restriction of internet to 2G speed and security of the State and public order.

(iii) The Counter Affidavit and oral arguments have "incorrectly and inconsistently contended that civilians can access video applications, chatbots webpages for the purposes of research, education/instruction, telemedicine, information on 2G speed". The restrictions are evidently disproportionate as they have a deleterious impact on the rights under Articles 19, 21 and 21A of the people of J&K.

RESPONSE ON BEHALF OF PETITIONER IN THE MATTER OF SOAYIB QUERESHI v. UNION TERRITORY OF JAMMU AND KASHMIR

The Response, filed by the Petitioner-in-Person, asserts that as the note tries to show that "social media" is being used to extend threats and incite the youth, then the "least restrictive measure" would be to only place a ban or block social media to curb these activities.

"Internet as a platform for accessing knowledge and communication is required to be distinguished from "Social Media". Despite the observations of this Hon'ble Court in Anuradha Bhasin v. Union of India, the Respondent continues to allow Social Media Applications through Internet and then relies on its misuse to put curbs on the Internet Speed".

The Response goes on to highlight that a balance is required to be maintained between the legitimate goals of a State to protect itself and to protect the rights of its citizens, and therefore, a blanket restriction on speed is disproportionate and arbitrary. Observations of High Court of Jammu and Kashmir have also been referred to, wherein Counsels appearing via video conferencing, as well as the Judges, have voiced concerns of low internet connectivity

It is also contended that UT of J&K is a state of peaceful people.

"As per records of the National Crime Bureau, only 24000 IPC Crimes were registered in the State of Jammu and Kashmir, in comparison to more than 3 lakh for the State of Maharashtra and Andhra Pradesh".

The Response concludes with the submission that the Respondent has confused the misuse of social media with the misuse of internet, and that only because social media is being misused, other platforms of the Internet essential for functioning of daily life cannot be restricted.