Plea In SC For Rehabilitation Measures For Migrant Workers After Lockdown 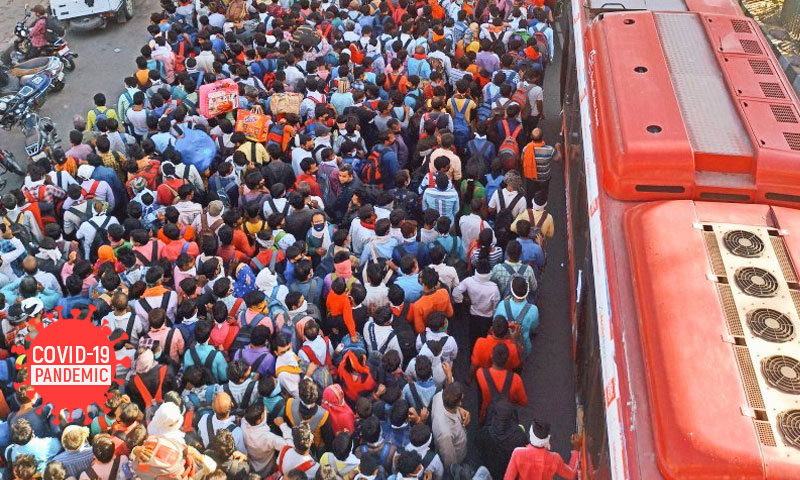 Advocate Alakh Alok Srivastava has filed an application in Supreme Court seeking directions to ensure the effective rehabilitation of migrant workers once the nationwide lockdown is over.The application is filed in his own Public Interest Litigation (PIL) which had called for immediate action to be taken to safeguard the rights of migrant workers and provide them with basic essentials like...

Advocate Alakh Alok Srivastava has filed an application in Supreme Court seeking directions to ensure the effective rehabilitation of migrant workers once the nationwide lockdown is over.

The application is filed in his own Public Interest Litigation (PIL) which had called for immediate action to be taken to safeguard the rights of migrant workers and provide them with basic essentials like food, water, shelter and medical aid, Srivastava states that relevant developments are likely to take place once the lockdown is over and urges the Court to take steps to secure the well-being of these workers post lockdown.

In furtherance of this, the applicant has made a number of suggestions and has sought the indulgence of the Court in directing the Government to provide the same to all migrant workers once the lockdown is over. These include-

· Free transportation to their destination via special bus/train

· One month's free ration without insisting on a ration card

Further, it has been prayed that the government be directed to prepare a composite plan for the rehabilitation of aggrieved workers in advance as well as to set up a "Migrant Labourer Crisis Management Board as a Common Gateway" to supervise and monitor these welfare measures and avoid such crisis in future. To further avoid a repeat of such a situation, Srivastava has also sought orders to establish a 24-Hour multi-lingual Call Centre which would act as a focal point providing accurate information and effective grievance redressal to migrant workers in case of any extreme exigency in the future.

When the original plea came up for consideration last week, Solicitor General Tushar Mehta, representing the Government, informed the Court that as of 11 am on March 31, there were no migrant workers on the streets. Complying with the directions of the Court, the government submitted its status report on the situation regarding the welfare of the migrant workers and the measures taken to prevent an exodus resulting from the nationwide lockdown. It was stated that all aggrieved workers had been taken to shelters or other government facilities where basic essentials were being provided to them.

During the hearing, Srivastava had orally argued that amongst the "major reasons for the present exodus of the migrant labourers was the panic created by some fake news or rumour that the lock down would be extended for three more months." Through the present application, he also seeks to put this argument on record, especially in light of the fact that the Government in its report addressed this issue and enunciated that "fake news capable of causing panic in the mind of population is found to be the single most unmanageable hindrance in the management of this challenge." Taking note of the same, the Apex Court had asked the media to report responsibly and also agreed to direct the government to activate a daily bulletin with all relevant updates on the situation. Apropos this, the applicant also seeks a direction to the media to refer to the official version and publish the same.

The Centre, in its report, had also stated that they were considering the option of providing counselling to douse the panic emanating from the outbreak of the novel Corona Virus.

The matter is scheduled to come up for consideration by a Supreme Court Bench comprising of CJI SA Bobde and Justice L. Nageswara Rao.