Plea In SC To Ensure Ban On Stubble Burning; Provision For Reimbursement Of Money Spent By Farmers On Stubble Removing Machines [Read Petition] 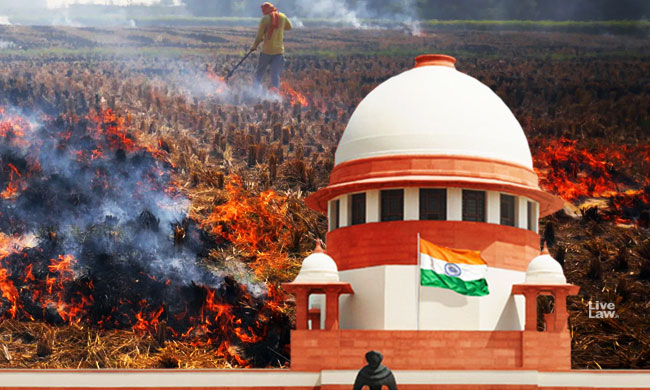 A PIL has been filed before the Supreme Court seeking a direction upon the State Governments of Punjab and Haryana to ensure a complete ban on stubble burnings in their respective states. As the stubble burning season (from September till January) has arrived, the Petitioners— a 3rd year law student, Aman Banka and a Class XII student, Aditya Dubey through Advocate Nikhil...

A PIL has been filed before the Supreme Court seeking a direction upon the State Governments of Punjab and Haryana to ensure a complete ban on stubble burnings in their respective states.

As the stubble burning season (from September till January) has arrived, the Petitioners— a 3rd year law student, Aman Banka and a Class XII student, Aditya Dubey through Advocate Nikhil Jain, highlighted that stubble burning contributes to almost 40-45% of air pollution in Delhi.

They therefore seek to ensure that the Air Quality Index level in Delhi-NCR does not critical levels during the stubble burning season this year, especially in view of the prevailing Covid-19 Pandemic.

"The "Right To Breathe" Clean Air is an integral part of the Fundamental 'Right to Life' enshrined in Article 21 of the Constitution of India and the said fundamental right is being violated by the failure of the Union Government and the State Governments, to keep the air pollution levels in Delhi-NCR below hazardous levels every year during the period between September to January," they submitted.

"In the Year 2019, thousands of stubble fires were lit in Punjab and Haryana by farmers to clear their fields for next sowing season, which filled the air in Delhi-NCR with Suspended Particulate Matter and resulted in the AQI levels in Delhi crossing 1000 and caused severe respiratory, ophthalmic and_ skin diseases amongst the citizens of Delhi-NCR and even resulted in death of many citizens. This was a clear violation of the Fundamental Right to Breathe of the Citizens of Delhi-NCR."

Inter alia, they have sought for issuance of necessary directions to the Respondent-States to ensure availability of appropriate stubble removing machines, free of cost, to the small and marginal farmers of the concerned states.

The Petitioners have argued that stubble fires in Punjab & Haryana are a direct result of the "inability of the small & marginal farmers to purchase or rent out stubble removal machines due to financial incapacity", which leaves them with no option but to burn the plant residue in their fields.

To remedy the situation, the Petitioners have sought the following reliefs:

Apart from regulation of stubble burning, the Petitioners have urged the following directions be made to the Delhi Government:

Taking serious note of the air pollution which has engulfed the Delhi-NCR area, the Supreme Court passed a slew of directions in November last year. The State Governments were directed to ensure that no further crop stubble burning takes place. Further, it imposed a ban on construction and demolition activities in Delhi and NCR.

The Court had further highlighted that punishing the farmers for stubble burning was not the ultimate solution, but to provide them with the basic facilities and amenities.

Stubble Burning - To Punish Farmers Is Not The Solution; Provide Them Basic Amenities : SC

In January this year, the Court passed several directions, dealing right from the problem of stubble burning to vehicular emissions and construction dust in Delhi.

The Central Government and the State Governments of Punjab, Haryana and UP were directed to prepare a comprehensive plan to prevent stubble burning. They were also asked to prepare a scheme for making available Combine Harvesters, Happy Seeders, Hydraulically Reversible MB Plough, Paddy Straw Chopper, Mulcher, Rotary Slasher, Zero Till Seed Drill and Rotavators and balers, especially dedicated to small and marginal farmers, either free of charge or on nominal rental basis.