[Section 6(5) HSA] Plea Of Oral Partition Can Be Accepted Only In Exceptional Cases If It Is Supported By Public Documents: SC [Read Judgment] 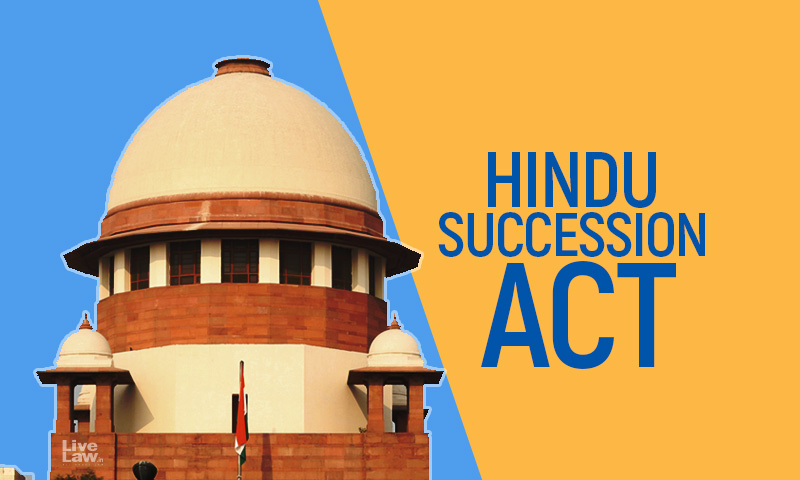 x
"We reiterate that the plea of an oral partition or memorandum of partition, unregistered one can be manufactured at any point in time, without any contemporaneous public document needs rejection at all costs."

The Supreme Court has observed that a plea of partition for the purpose of Section 6(5) of the Hindu Succession Act based on oral evidence alone cannot be accepted. However, in exceptional cases where plea of oral partition is supported by public documents and partition is finally evinced in the same manner as if it had been affected by a decree of a court, it may be accepted, the...

The Supreme Court has observed that a plea of partition for the purpose of Section 6(5) of the Hindu Succession Act based on oral evidence alone cannot be accepted. However, in exceptional cases where plea of oral partition is supported by public documents and partition is finally evinced in the same manner as if it had been affected by a decree of a court, it may be accepted, the Court held.

The bench comprising of Justices Arun Mishra, S. Abdul Nazeer and MR Shah also observed that he Statutory Fiction of Partition contained in the original Section 6 of the Act did not bring about the actual partition or disruption of coparcenary.

Sub-Section (5) of Section 6 provides that nothing contained in Section 6 shall apply to a partition, which has been effected before the 20th day of December, 2004. Similar proviso to Section 6(1) provides that nothing contained in this sub- section shall affect or invalidate any disposition or alienation including any partition or testamentary disposition of property which had taken place before the 20th day of December, 2004. The Explanation appended to the Section 6 further clarifies that for the purposes of Section 6, 'partition' means effected by any registered partition deed or effected by a decree of a court.

One of the contention raised was that the Explanation to the Section safeguards all genuine transactions of the past, including oral partition effected by the parties.Solicitor General, supporting this contention, also submitted before the Court that the requirement of a registered partition deed may be interpreted as the only directory and not mandatory in nature considering its purposes.

Senior Advocate and Amicus Curiae R. Venkataramani submitted before the Court  that there could be any number of instances where parties would have entered into family settlements or division of properties on the basis of respective shares or entitlement to succeed on a partition. According to him, the Parliament did not intend to upset all such cases, complete transactions, and open them for a new order of succession. Senior Advocate VVS Rao, who also assisted the court as Amicus Curiae, submitted that the explanation should not be understood as invalidating all the documents or oral partition in respect of the coparcenary property. "In case genuineness of such document is questioned, it has to be proved to the satisfaction of the Court. The saving of transactions would safeguard the genuine past transaction and prevent unrest in the family system.", he said.

Addressing these arguments, the bench observed:

Special definition of partition has been carved out in the explanation.The intendment of the provisions is not to jeopardise the interest of the daughter and to take care of sham or frivolous transaction set up in defence unjustly to deprive the daughter of her right as coparcener and prevent nullifying the benefit flowing from the provisions as substituted. The statutory provisions made in section 6(5) change the entire complexion as to partition.However, under the law that prevailed earlier, an oral partition was recognised. In view of change of provisions of section 6, the intendment of legislature is clear and such a plea of oral partition is not to be readily accepted. The provisions of section 6(5) are required to be interpreted to cast a heavy burden of proof upon proponent of oral partition before it is accepted such as separate occupation of portions, appropriation of the income, and consequent entry in the revenue records and invariably to be supported by other contemporaneous public documents admissible in evidence, may be accepted most reluctantly while exercising all safeguards.The intendment of Section 6 of the Act is only to accept the genuine partitions that might have taken place under the prevailing law, and are not set up as a false defence and only oral ipse dixit is to be rejected outrightly. The object of preventing, setting up of false or frivolous defence to set at naught the benefit emanating from amended provisions, has to be given full effect. Otherwise, it would become very easy to deprive the daughter of her rights as a coparcener. When such a defence is taken, the Court has to be very extremely careful in accepting the same, and only if very cogent, impeccable, and contemporaneous documentary evidence in shape of public documents in support are available, such a plea may be entertained, not otherwise. We reiterate that the plea of an oral partition or memorandum of partition, unregistered one can be manufactured at any point in time, without any contemporaneous public document needs rejection at all costs. We say so for exceptionally good cases where partition is proved conclusively and we caution the courts that the finding is not to be based on the preponderance of probabilities in view of provisions of gender justice and the rigor of very heavy burden of proof which meet intendment of Explanation to Section 6(5). It has to be remembered that courts cannot defeat the object of the beneficial provisions made by the Amendment Act. The exception is carved out by us as earlier execution of a registered document for partition was not necessary, and the Court was rarely approached for the sake of family prestige.It was approached as a last resort when parties were not able to settle their family dispute amicably. We take note of the fact that even before 1956, partition in other modes than envisaged under Section 6(5) had taken place.

The expression used in Explanation to Section 6(5) 'partition effected by a decree of a court' would mean giving of final effect to actual partition by passing the final decree, only then it can be said that a decree of a court effects partition. A preliminary decree declares share but does not effect the actual partition, that is effected by passing of a final decree; thus, statutory provisions are to be given full effect, whether partition is actually carried out as per the intendment of the Act is to be found out by Court. Even if partition is supported by a registered document it is necessary to prove it had been given effect to and acted upon and is not otherwise sham or invalid or carried out by a final decree of a court.In case partition, in fact, had been worked out finally in toto as if it would have been carried out in the same manner as if affected by a decree of a court, it can be recognized, not otherwise. A partition made by execution of deed duly registered under the Registration Act, 1908,also refers to completed event of partition not merely intendment to separate, is to be borne in mind while dealing with the special provisions of Section 6(5) conferring rights on a daughter. There is a clear legislative departure with respect to proof of partition which prevailed earlier; thus, the Court may recognise the other mode of partition in exceptional cases based upon continuous evidence for a long time in the shape of public document not mere stray entries then only it would not be in consonance with the spirit of the provisions of Section 6(5) and its Explanation.

The statutory fiction of partition is far short of actual partition, it does not bring about the disruption of the joint family or that of coparcenery.

Yet another issue considered by the court was whether the statutory fiction contained in the proviso to unamended section 6 with respect to the determination of shares of a deceased coparcener and its devolution thereunder would disrupt coparcenary.

This issue arose since, in Prakash vs. Phulavati, the court, to hold that section 6 applies when both coparceners and his daughter were alive on the date of commencement of Amendment Act, had observed that the provision contained in the Explanation to section 6(5) provides for the requirement of partition for substituted section 6 is to be a registered one or by a decree of a court, can have no application to a statutory notional partition on the opening of succession as provided in the unamended Section 6. "The notional statutory partition is deemed to have taken place to ascertain the share of the deceased coparcener which is not covered either under the proviso to section 6(1) or section 6(5), including its Explanation. The registration requirement is inapplicable to partition of property by operation of law, which has to be given full effect.", it was held in Prakash vs. Phulavati

Answering this issue in the negative and also disapproving the above observations in Phulavati, the bench observed that the statutory fiction of partition is far short of actual partition, it does not bring about the disruption of the joint family or that of coparcenery. The court explained:

"When the proviso to unamended section 6 of the Act of 1956 came into operation and the share of the deceased coparcener was required to be ascertained, a deemed partition was assumed in the lifetime of the deceased immediately before his death. Such a concept of notional partition was employed so as to give effect to Explanation to section 6. The fiction of notional partition was meant for an aforesaid specific purpose. It was not to bring about the real partition. Neither did it affect the severance of interest nor demarcated the interest of surviving coparceners or of the other family members, if any,entitled to a share in the event of partition but could not have claimed it. The entire partition of the coparcenary is not provided by deemed fiction; otherwise, coparcenary could not have continued which is by birth, and the death of one coparcener would have brought an end to it. Legal fiction is only for a purpose it serves, and it cannot be extended beyond."

"What has been recognised as partition by the legislation under section 6, accordingly, rights are to be worked out. This Court consistently held in various decisions mentioned above that when the rights are subsequently conferred, the preliminary decree can be amended, and the benefit of law has to be conferred. Hence, we have no hesitation to reject the effect of statutory fiction of proviso to section 6 as discussed in Prakash v. Phulavati(supra) and Danamma(supra). If a daughter is alive on the date of enforcement of the Amendment Act, she becomes a coparcener with effect from the date of the Amendment Act, irrespective of the date of birth earlier in point of time."