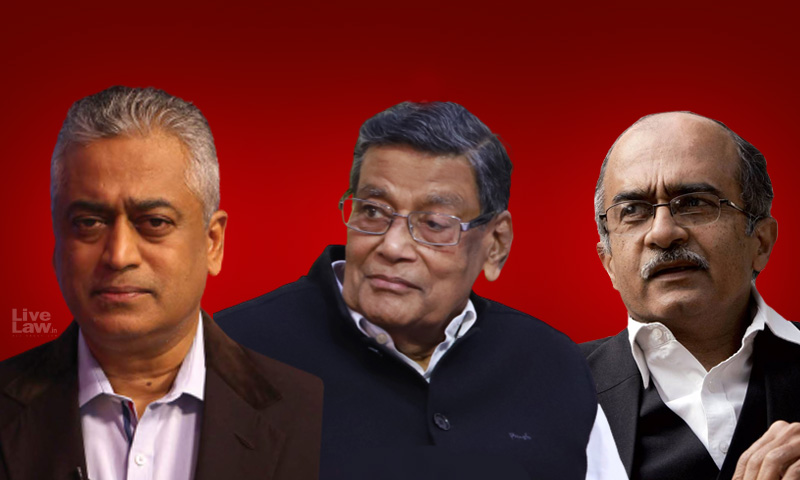 An application has been placed before Attorney General KK Venugopal seeking consent for the initiation of contempt proceedings against Consulting Editor of the India Today Group, Rajdeep Sardesai.The petition for initiation of contempt proceedings claims that Sardesai has willingly disrespected the Supreme Court and attempted to defame the institution through a series of statements made...

An application has been placed before Attorney General KK Venugopal seeking consent for the initiation of contempt proceedings against Consulting Editor of the India Today Group, Rajdeep Sardesai.

The petition for initiation of contempt proceedings claims that Sardesai has willingly disrespected the Supreme Court and attempted to defame the institution through a series of statements made on Twitter.

Alleging that the well-known TV anchor intentionally made derogatory and scandalous statements, the petitioner has sought for initiation of contempt proceedings against him "for willful and deliberate disobedience of the orders/judgment" passed by the Supreme Court.

The petitioner, Aastha Khurana, a 20 year old resident female of Panipat, Haryana, has pointed out several tweets of Sardesai to claim that he has shown no respect towards the Supreme Court and gone on to question the credibility of sitting as well as former Judges.

In support of her claims, the petitioner places reliance on the most recent tweet from 31.08.2020, wherein Sardesai had remarked saying "Clearly, court looking to wriggle out of an embarrassment of its own making", in the context of the Re. 1 fine imposed on Prashant Bhushan in his contempt case. Pointing out other comments by the senior journalist's with regard to Prashant Bhushan's case, the petitioner contends that he "tried to spread feeling of no confidence on the Hon'ble Court amongst public and even stated the apology by the Hon'ble Court for its recent judgments."

Another tweet from 14.08.2020 has also been highlighted wherein it is stated that Sardesai compared the judgment in Prashant Bhushan's case to Habeas Corpus petitions of those detained in Kashmir.

Having further alluded to Sardesai's comments regarding former and present Judges, the petitioner submits that these kind of statements pose a big threat to the Judiciary.

She goes on to submit that Sardesai is a "well known personally and various people take his statement as true and correct, therefore his statement on the top judicial body of his country indicates a threat to the society, which will lead to no trust on the judiciary and the justice will never deliver to the people because they will look at this Hon'ble Court with a questionable eyes and all the respect of this prestigious institution will vanish."

Furthermore, she adds that his tweets are in the public domain and are accessible globally, which could lead to giving the Apex Court a poor image abroad as well.

When a criminal contempt petition is filed by a private individual, the consent of the Attorney General (or Solicitor General) is required before the Top Court can consider the matter. Therefore, as per Section 15 of the Contempt of Courts Act read with Rule 3 of Rules to Regulate Proceedings for Contempt of Supreme Court, an application has been placed before KK Venugopal.

Last month, the Attorney General had declined sanction for a petition seeking to initiate contempt against actor Swara Bhaskar over her remarks against Ayodhya judgment, observing that the comments did not amount to attack on the judiciary.