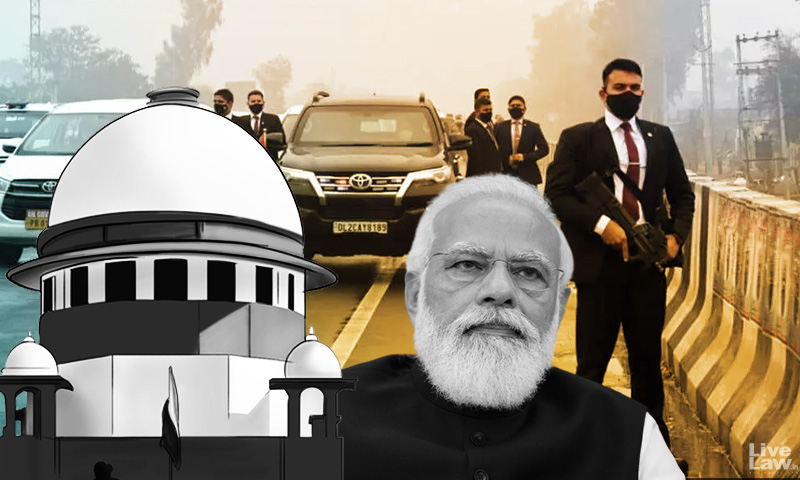 The Supreme Court of India on Friday directed the Registrar General of the Punjab and Haryana High Court to secure the records relating to the visit of Prime Minister Narendra Modi to Punjab on January 5, during which a security lapse occurred when a group of protesters blocked the PM's cavalcade.The Court directed the State of Punjab, central and state agencies to cooperate with the...

The Supreme Court of India on Friday directed the Registrar General of the Punjab and Haryana High Court to secure the records relating to the visit of Prime Minister Narendra Modi to Punjab on January 5, during which a security lapse occurred when a group of protesters blocked the PM's cavalcade.

The Court directed the State of Punjab, central and state agencies to cooperate with the Registrar General and provide entire records immediately. The Court said that both the Director-General of Police of Chandigarh UT and an officer from NIA can be nodal officers.

The Court also orally asked the Central Government and the Punjab Government to put on hold the proceedings of the respective committees constituted by them to enquire into the security lapse till next Monday.

"Ask both the committees to hold their operations till Monday. This will not be in order but it's understood", Chief Justice of India told the Solicitor General of India and the Advocate General of Punjab.

Senior Advocate DS Patwalia, Advocate General of Punjab, requested the bench to pass an order to put on hold the proceedings of the Committee constituted by the Centre till next Monday. He submitted that the said Committee has issued notices to the Punjab DGP and state officials. He undertook to put on hold the operations of the State Committee as well.

Solicitor General Tushar Mehta submitted that the Central Committee is not looking into the "larger issue" and is constituted only for internal purposes.

"But if you take action regarding some officer etc then...it will be till Monday, what will happen till then?", CJI asked Solicitor General.

The CJI orally conveyed that the Court intends both the Committees to hold their operations till next Monday. The SG and the AG agreed to convey the intent of the Court to the Committees.

"..both committees should not function till Monday", CJI orally said.

A Bench comprising the Chief Justice of India NV Ramana, Justice Surya Kant and Justice Hima Kohli was hearing a petition filed by the NGO "Lawyers Voice" which sought a court-monitored probe into the security lapse which happened when Prime Minister was travelling by road from Bathinda to National Martyrs Memorial in Hussainiwala. The PM's convoy was stuck for 15-20 minutes on the flyover due to a road blockade by some protestors.

Senior Advocate Maninder Singh, appearing for the petitioner-NGO, began his submissions by referring to Special Protection Group Act. He submitted that the security of the Prime Minister is done as per the SPG Act.

" Under this act, it's not a state subject of law and order. It's a national security issue. Also, the fact remains, in this trip, when PM Modi had to go to Ferozpur there was an impermissible stoppage of 20 minutes! All of us have to join heads together, this can't happen again", Singh submitted.

He urged that the investigation cannot be done by the state. Referring to the Committee constituted by the State of Punjab to probe into the incident, Singh submitted that this is not a matter which the state can investigate, and there should be a probe by a national agency like NIA under the monitoring of the Court.

Singh alleged that the retired judge heading the Punjab committee is unsuitable - "...the person appointed is a subject matter of a petition. A huge scam had happened in the state. This court had held that the Judge had 'targeted police officer who conducted investigation into his case".

"Investigation must be undertaken with evidence protected in an efficient manner rising above the politics & this be ensured under your Lordships monitoring", Singh submitted. He said that the entire records relating to the case need to be protected.

Solicitor General of India Tushar Mehta submitted that it was a major security lapse and joined the request of the petitioner for a central investigation under the monitoring of the Court.

"Whenever PM's cavalcade moves the DG of the concerned state is to be consulted first & only when he clears PM's cavalcade moves. Here, the incharge gave that signal. He didn't say there was a blockage. Though local police was very much there enjoying tea according to videos, they didn't inform that there is a blockade. Now imagine, the motorcade is on flyover with protectee, there are trucks and tractors blocking.  Serious mishap could have happened. It would have been a subject of international embarrassment", Solicitor General submitted.

The Solicitor General also referred to videos of the event uploaded by a banned terrorist organization "Sikhs for Justice", and hinted that there could be an angle of "cross-border terrorism".

"There's a video by banned Terrorist organization, so-called head of that organization, Sikhs for Justice, publicly calls people to do Xyz Things. This could be subject of cross border terrorism", Solicitor submitted.

The Punjab Government constituted a Committee to investigate the matter after the petition was filed in the Supreme Court and it was an "afterthought" and an "attempt to overreach the Court", the SG added. He said that one of the members of the Committee is the Home Secretary, who himself could be under the scanner.

Senior Advocate DS Patwalia, Advocate General of Punjab, submitted that the State Government was not taking the issue lightly.

"State is not taking this issue lightly, there has been a lapse somewhere, and State is doing everything to look into it", the Advocate General submitted. He informed that an FIR has been registered after taking cognizance of the incident.

The AG said that he was not objecting to the Court ordering an investigation or appointing a person to monitor the probe. Responding to the objections raised against the State's committee, the AG submitted that the Centre has also constituted a committee.

"One of the officers of Centre's committee is S Suresh, he was responsible for overall security, our contention is he can't be a part of the committee too. I'm not joining issue on anything, we want it to be investigated", the AG said.

The AG asserted that there was no "politics" involved in the issue and the security of the Prime Minister is of paramount importance. Though the petition "reeks of politics", the AG said, he is not objecting to an independent probe.

"We are not joining issue on anything. If lordships may appoint anyone to investigate, a former judge of HC or SC may be appointed as the court deems fit", he submitted.

SPG-IG can be removed from the Committee: SG says