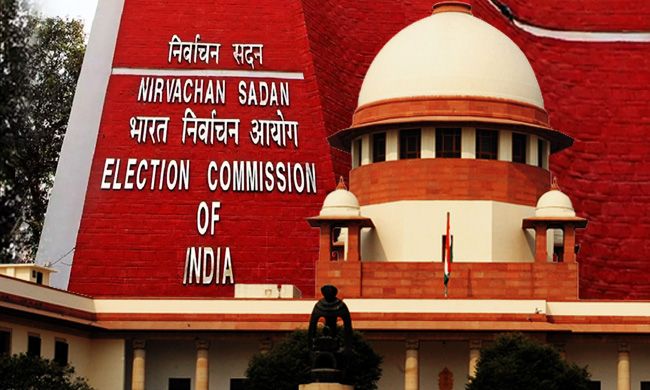 With the objective of decriminalization of politics, the Supreme Court on Tuesday directed that the political parties must publish the criminal antecedents, in any, of the candidates within 48 hours of their selection.A bench comprising Justices RF Nariman and BR Gavai modified the direction in its February 13, 2020 judgment in that regard.In paragraph 4.4 of the February 2020 judgment,...

With the objective of decriminalization of politics, the Supreme Court on Tuesday directed that the political parties must publish the criminal antecedents, in any, of the candidates within 48 hours of their selection.

A bench comprising Justices RF Nariman and BR Gavai modified the direction in its February 13, 2020 judgment in that regard.

In paragraph 4.4 of the February 2020 judgment, the Supreme Court had ordered that the details shall be published within 48 hours of the selection of the candidate or not less than two weeks before the first date for filing of nominations, whichever is earlier.

Today, the bench said that it has changed paragraph 4.4 of the said judgment and made it as publication within 48 hours.

The court has also directed the Election Commission of India to create a dedicated mobile application containing information published by candidates regarding their criminal antecedents, so that at one stroke, each voter gets such information on his/her mobile phone. The following are the directions issued to 'make the right of information of a voter more effective and meaningful':

The other directions passed by the Court are :

(ii) The ECI is directed to create a dedicated mobile application containing information published by candidates regarding their criminal antecedents, so that at one stroke, each voter gets such information on his/her mobile phone;

(iii) The ECI is directed to carry out an extensive awareness campaign to make every voter aware about his right to know and the availability of information regarding criminal antecedents of all contesting candidates. This shall be done across various platforms, including social media, websites, TV ads, prime time debates, pamphlets, etc. A fund must be created for this purpose within a period of 4 weeks into which fines for contempt of Court may be directed to be paid;

(iv) For the aforesaid purposes, the ECI is also directed to create a separate cell which will also monitor the required compliances so that this Court can be apprised promptly of non-compliance by any political party of the directions contained in this Court's Orders, as fleshed out by the ECI, in instructions, letters and circulars issued in this behalf;

(v) We clarify that the direction in paragraph 4.4 of our Order dated 13.02.2020 be modified and it is clarified that the details which are required to be published, shall be published within 48 hours of the selection of the candidate and not prior to two weeks before the first date of filing of nominations; and

The above directions have been issued in the contempt petition filed by Advocate Brajesh Singh. The Court also imposed fine on political parties for failure to comply with the judgment of disclosing criminal antecedents of candidates contesting polls in Bihar. ₹5 lakh fine imposed on CPI(M) & NCP and ₹1 lakh fine on BJP, INC, Janta Dal, RJD, CPI & LJP.

But our hands are tied, We can only appeal to the conscience of the law-makers

"The only question is, whether this Court can do so by issuing directions which do not have foundation in the statutory provisions. 72.This Court, time and again, has appealed to the law-makers of the Country to rise to the occasion and take steps for bringing out necessary amendments so that the involvement of persons with criminal antecedents in polity is prohibited. All these appeals have fallen on the deaf ears. The political parties refuse to wake up from deep slumber. However, in view of the constitutional scheme of separation of powers, though we desire that something urgently requires to be done in the matter, our hands are tied and we cannot transgress into the area reserved for the legislative arm of the State. We can only appeal to the conscience of the law-makers and hope that they will wake up soon and carry out a major surgery for weeding out the malignancy of criminalisation in politics", the Court expressed helplessness.

The bench was delivering its verdict in the in contempt petitions filed alleging failure to publish criminal antecedents of candidates in the Bihar Assembly elections held in November 2020.

The observations were made in the backdrop of a contempt petition filed by Advocate Brajesh Singh that was reserved for Judgment on July 20, 2021.

Singh in his plea claimed to be aggrieved by the conduct of the respondents during the Bihar Legislative Assembly Election of 2020, alleging wilful disobedience of the Court's judgement of February 13, 2020.

In the said judgment, it was held it shall be mandatory for political parties at the Central and state election level to upload on the website detailed information regarding individuals with pending criminal cases (including the nature of the offences and the relevant particulars such as whether charges have been framed, the concerned court, the case number etc) who have been selected as candidates, along with the reasons for such selection, as also as to why other individuals without criminal incidents could not be selected as candidates.

Also, such details must be published in the social media platforms of the political parties, including Facebook and Twitter and also in one local vernacular newspaper and one national newspaper.

The matter was primarily heard on the question of the invocation by the ECI of its power to suspend or withdraw recognition of a recognised political party for its failure to observe Model Code of Conduct or follow lawful directions and instructions of the Commission (under Paragraph 16A of the Symbols Order).

The petitioner had stated that after the ECI announced the poll scheduled for the Legislative Assembly of Bihar, all the prominent political parties of Bihar started publication of criminal antecedents of its candidates from October 7, 2020 in one particular news paper, which was not a "widely circulated newspaper" as envisaged by the SC.

The petition further stated that even though the Top Court had said that the political party must describe the reasons as to why a person with criminal antecedents was selected with reference to the qualifications, achievements and merit and not mere winnability, some parties had given the reason of "popularity" and "probability of winning" for choosing persons with criminal background.

In this context, the plea had sought contempt proceedings against the alleged contemners for wilfully and deliberately disobeying the directions passed by Supreme Court in the order of February 13, 2020 and pass direction to the political parties for giving cogent reasons, "specifically in the case where the convicted henchmans' blood relatives are contesting election as proxy, in these situations, the concerned political parties must be compelled to put the information in public domain regarding blood relation with the so called henchman's who are ensuring their victories while sitting behind such candidates".

Also Read reports about the hearing: