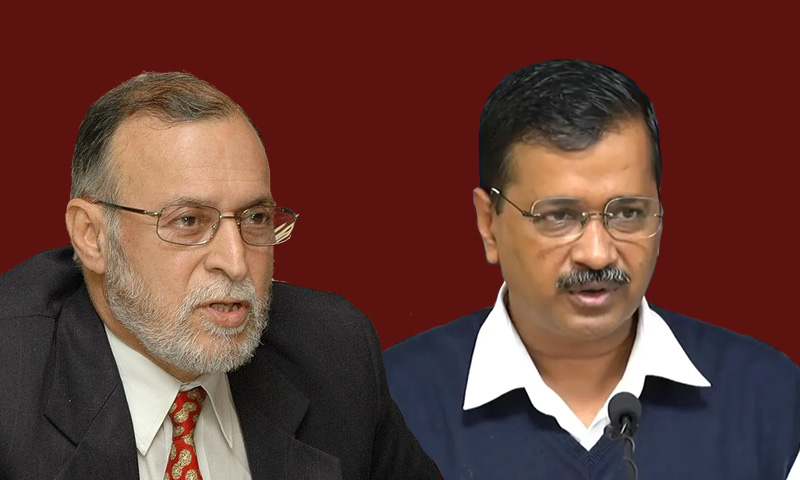 The President of India, Ram Nath Kovind on Sunday granted assent to the Government of National Capital Territory of Delhi (Amendment) Bill, 2021, which enhances the powers of the Delhi Lieutenant Governor over the elected government of the GNCTD.The Parliament had passed the bill on March 24, amid a walkout by the opposition in the Rajya Sabha.The President was admitted to the AIIMS...

The President of India, Ram Nath Kovind on Sunday granted assent to the Government of National Capital Territory of Delhi (Amendment) Bill, 2021, which enhances the powers of the Delhi Lieutenant Governor over the elected government of the GNCTD.

The Parliament had passed the bill on March 24, amid a walkout by the opposition in the Rajya Sabha.

The President was admitted to the AIIMS Hospital Delhi, after he complained of chest pain, and is expected to undergo a bye-pass surgery on March 30.

The Bill seeks to enhance the powers of Lieutenant Governor of Delhi by declaring him to be the "Government of Delhi".

It also provides that the opinion of the LG "shall be obtained" on all such matters as may be specified by the LG, before taking any executive action on decisions of the Council of Ministers of the Delhi Government.

The Bill seeks to amend the GNCT of Delhi Act, 1991, a legislation that provides framework for functioning of the Delhi Legislative Assembly and re-defines Delhi Government as the Lieutenant Governor (LG).

This last leg of the Bill, requiring the Government to mandatorily seek the Lieutenant Governor's opinion on the matters so specified by him may be contrasted with the observations made by the Supreme Court in GNCT of Delhi v. Union of India & Anr. (commonly known as Delhi v. LG case).

The Constitution Bench comprising of then CJI Dipak Misra, Justices AK Sikri, AM Khanwilkar, DY Chandrachud and Ashok Bhushan had ruled that "LG is an administrative head in the limited sense, and is not a Governor. He is bound by the aid and advise of NCT Government in areas other than those exempted",

The Top Court had observed that the elected representatives and the Council of Ministers of Delhi, being accountable to the voters of Delhi, must have the appropriate powers so as to perform their functions effectively and efficiently.

The Constitution bench added that the real purpose behind the Constitution (Sixty­-ninth Amendment) Act, 1991, which inserted Section 239AA (Special provisions with respect to Delhi) and paved way for setting up an elected Government in the Union Territory was "to establish a democratic setup and representative form of government wherein the majority has a right to embody their opinion in laws and policies pertaining to the NCT of Delhi subject to the limitations imposed by the Constitution."

In this backdrop, many members opposed the Bill. Leader of Opposition in the House, M. Mallikarjun Kharge said that the Government is trying to seize the powers of elected representatives in Delhi in order to run a "proxy Government" by handing over all the powers to a nominated LG.

He said that such centralization of power is against the Constitutional principles and the Bill must be referred to a Select committee for scrutiny.

MP from a constituency of Delhi, Sanjay Singh strongly opposed the Bill as being unconstitutional. He referred to Article 239AA(6) of the Constitution which states that "the Council of Ministers shall be collectively responsible to the Legislative Assembly".

He said that this being the position of the Constitution, there is no scope for the Government to make the Council of Ministers responsible to the LG by seeking his opinion for implementation of its orders.

Senior Advocate Abhishek Manu Singhvi, who is also a member of the Parliament, vehemently opposed the Bill. "This is the most pernicious, most unconstitutional Bill which this House has ever received," he said at the outset.

He emphasized that Delhi was especially inserted Constitutionally by Article 239AA which provided that it should be a full state and all provisions that apply to a State shall apply to Delhi. This is barring the power to legislate upon matters of public order, police and land.

He told the House that he appeared before the Supreme Court in Delhi v. LG case and will cite certain excerpts from the Constitution Bench judgment that will demonstrate that the Bill in question tries to nullify the effect of that judgment. He quoted:

"The Lieutenant Governor has not been entrusted with any independent decision­making power. He has to either act on the 'aid and advice' of Council of Ministers or he is bound to implement the decision taken by the President on a reference being made by him."

He remarked that the Bill is not only against Article 239AA of the Constitution but is also opposed to the Supreme Court judgment and the principles of Federalism.

He added that Cause 4 of the Bill precludes the Delhi Legislative Assembly from considering matters of day-to-day administration of the Capital or from conducting inquiries in relation to administrative decisions.

This he said, is against Entry 39 in List II under Schedule VII of the Constitution which provides that powers of Legislative Assembly are within the domain of the State Government.

With respect to the provision requiring LG's opinion before implementation of Government's decisions, Singhvi said that it is against sub-clause 6 under Article 239AA of the Constitution which states that the Council of Ministers shall be collectively responsible to the Legislative Assembly. "But this Bill says that everyone will be responsible to LG. This is direct contradiction," Singhvi remarked.

Union Minister G Kishan Reddy claimed that the Bill does not propose to bring any Constitutional amendment. He insisted that the Bill only seeks to clear certain ambiguities in the law.

Reddy claimed that that the Bill neither takes away any right from the Delhi Government nor it confers any new rights on the LG. He said that the proposed amendments are to clarify the points raised after directions from the Supreme Court.

BJP MP Bhupender Yadav insisted that Delhi is not a full-fledged State. He said that the territory is essentially a Union Territory whose head, as declared under the Constitution, is the LG.

He stated that the proposed amendments to the 1991 Act are in line with General Clauses Act, 1897, which states that the head of the Central Government is the President and that of the State Government is the Governor. He said that since Delhi is a union territory, its head shall be the LG by the same analogy.

So far as proposed restrictions on the powers of the Delhi Legislative Assembly are concerned, he said that the same are only being standardized by bringing them in line with the Lok Sabha rules as part of "good governance".

He clarified that the Delhi Assembly Committee may look into Bills, Budgets, etc. However, it cannot look into day-to-day administration of the Government. "If Committee starts looking into criminal cases, what happens with powers of executive police," he asked.

He stated that the Supreme Court in its judgment said that the LG needs to be informed of all the decisions that are made by the Council of Ministers. He insisted that the Bill is simply intended to give effect to that observation.

Click here to read the Gazette notification of the GNCTD Bill