Primary Concern Should Be Health Of Citizens, Not Health Of Airlines: CJI Tells Centre In Air India Case[Court Room Exchange] 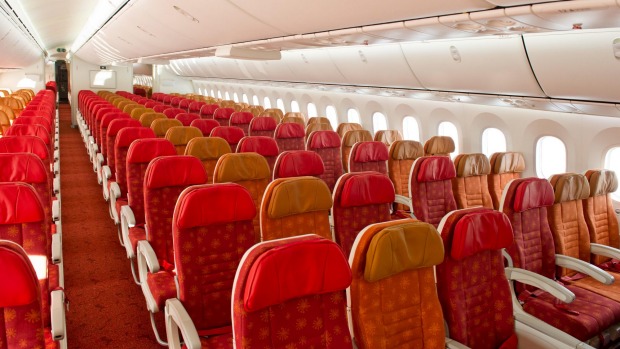 x
"Will the Virus know its in the aircraft and it's not supposed to infect?" - CJI

The Supreme Court on Monday allowed Air India to operate non-scheduled flights with mid-row seat occupied on Aircrafts for 10 days, i.e. up to June 6.A bench of Chief Justice SA Bobde, Justices AS Bopanna & Hrishikesh Roy added that for non-scheduled flight operations after the aforementioned date, Air India will follow the Bombay High Court's direction to keep middle seats vacant...

The Supreme Court on Monday allowed Air India to operate non-scheduled flights with mid-row seat occupied on Aircrafts for 10 days, i.e. up to June 6.

The bench granted the relaxation taking note of the extraordinary situation that flight tickets for middle seats up to June 6 have already been issued, and the cancellation of the same could lead to anxieties and inconveniences to Indians stranded abroad.

However, that did not stop the bench from expressing displeasure about the decision of allow booking of mid-row seats on international flights as this would directly pose a threat of contracting the deadly virus to passengers on board.

"Outside you keep a distance of 6 feet and inside you're eliminating even middle seat difference... Will the Virus know its in the aircraft and it's not supposed to infect?" - Chief Justice SA Bobde

CJI Bobde also added that the main focus should be on protecting the health of people and not the [economic (vol.)] health of a commercial airline.

Solicitor General Tushar Mehta appeared for Union of India (Ministry of Civil Aviation) & Air India Limited, both of whom had challenged the May 22 order of the Bombay High Court, directing Air India to keep mid-row seats vacant even in respect of non-scheduled International flights.

CJI, "So you're for Air India and Union both ? So Air India's difficulty is your difficulty?"

An exchange ensued between the bar and the bench wherein the Solicitor General sought to establish the issues with the Bombay High Court order disallowing international airlines to run with occupied middle seats in light of the possibility of exposure to Coronavirus infection due to lack of social distancing requisites.

CJI, "It is common sense that maintaining social distancing is important"

SG stated that the minutes of meeting of the experts can be shared with the Bench, according to which the best practice was not necessarily attuned to following the mid-row seat vacant norm but mandatory quarantine (on landing) & testing.

"It is the decision of the experts to not keep mid-row seats vacant", Solicitor General Tushar Mehta argued. He added that the decision was taken after looking into the nuances of "HPCA".

"The best practice is testing and quarantine; not seat difference" - Solicitor General

Further to this, Solicitor General apprised the CJI SA Bobde led bench regarding the real-time and on ground issues that may arise if the middle-row seats are done away with on booked flights,

"Please consider My Lords, so if there was a flight from here to US where a family was traveling, people came because they had pre-bookings. Keeping vacant seats comes with procedural issues; family sits together, airports are different"

"Fact of the matter is they've only said keep centre seat vacant. No one is stopping you from bringing them back" CJI stated.

"We are very disturbed with this Order. Do not interrupt us now" - Supreme Court

CJI, "The DGCA and Air India is free to alter any norms it may consider appropriate during the pendency of the matter"

At this point, Solicitor General expressed that the passing of this order shall lead to an expansion of scope of the circular instead. However, the CJI added that the primary concern should be health of Indian citizens before and must supersede all technicalities.

The Union of India and Air India had approached the Supreme Court vide SLP which was listed on an urgent basis by the Top Court, even thought it was a declared holiday for Eid-ul-fitr.

The plea, while challenging the Bombay High Court Order of May 22 contended that the Centre had taken "all adequate care by way of standard operating procedure issued by the Ministry of Home Affairs dated May 5, 2020 and the subsequent SOP issued by Airlines - Air India."

"It is submitted that by mandating leaving of one seat between two seats by placing reliance on the circular issued by the DGCA dated March 2020 has committed a grave error. In this regard, it is specifically pointed the said circular dated 23rd march 22 other declaration of the time it was to apply to scheduled flights. It is submitted that it is a settled principle of law that a specific provision overrides a general provision" - Excerpt of Plea

Further, the plea averred that the urgency behind moving of the SLP on an urgent basis was the "devastating consequence of the impugned order on thousands of stranded people within the country and people stranded in various other countries who are being shifted to and from India through Air India. ... the inevitable impact of the impugned order [which requires middle seat to seat vacant] is to disembark one third of the passengers"

The Bombay HC however held that the May 22 circular was only applicable to domestic flights.

"Prima facie, we are in agreement with the submission made by the learned Counsel for the Petitioner that those passengers who are being lifted mainly from U.S.A and U.K. may be Covid-19 infected passengers. In our prima facie view, Air India has violated Circular dated 23rd March, 2020 by not keeping one seat between two seats empty while allocation of the seat at the time of check-in", a HC bench comprising Justices R D Dhanuka and Abhay Ahuja held.

The HC passed the direction in a petition filed by one Deven Y. Kanani, an Air India pilot, who alleged that the national carrier violated the COVID-19 guidelines by allowing the booking of middle seats.