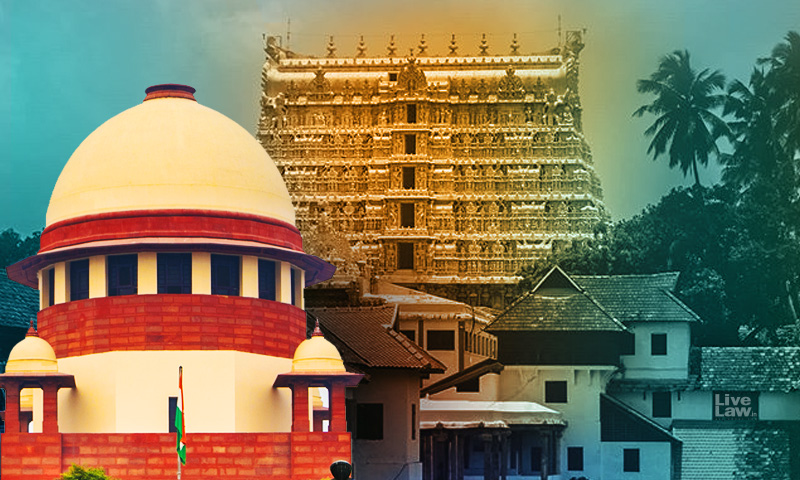 The Supreme Court, in Sree Padmanabhaswamy Temple case, has dealt with the effect of the Constitution (Twenty Sixth Amendment) Act, 1971 - which abolished privy purses- on the term 'Ruler of Travancore' in proviso to Section 18(2) of TCHRI Act. The court held that the constitutional abolition, did not in any way impact or affect the administration of the Temple, Sri Pandaravaga...

The Supreme Court, in Sree Padmanabhaswamy Temple case, has dealt with the effect of the Constitution (Twenty Sixth Amendment) Act, 1971 - which abolished privy purses-  on the term 'Ruler of Travancore' in proviso to Section 18(2) of TCHRI Act.

The court held that the constitutional abolition, did not in any way impact or affect the administration of the Temple, Sri Pandaravaga properties and the properties of the Temple, which continued to be under the control and supervision of the Ruler of Travancore.

This piece intends to examine the history and scope of the Constitution (Twenty Sixth Amendment) Act, 1971.

The Failed Amendment Bill and Presidential Order of 1970

On May 14, 1970, the then Finance Minister, Y.B. Chavan, introduced the Constitution (Twenty-fourth Amendment) Bill, 1970 for abolition of privy purse, privileges etc. conferred under Articles 291, 362 and 366(22). Though it was passed by Lok Sabha, the Bill failed in the Rajya Sabha to reach the requisite majority of not less than two-third members present as required by Article 368 and voting. The President of India, thereafter, invoking his powers under clause (22) of Article 366 of the Constitution, signed an Order withdrawing recognition of all the Rulers in the country en masse.

This Presidential Order derecognising the Rulers was questioned in Madhav Rao Scindia v. Union of India before the Supreme Court. An eleven-Judge Bench struck down the Presidential Order being illegal, ultra vires and inoperative on the ground that it had been made in violation of the powers of the President of India under Article 366(22) of the Constitution and declared that the writ petitioners would be entitled to all their pre-existing rights and privileges including right to privy purses as if the impugned orders therein had not been passed.

The amendment bill was moved by the then Prime Minister Indira Gandhi and was passed by both the houses and became an Act later. In the Statement of Object and Reasons of the Bill, it was stated that "the concept of rulership, with privy purses and special privileges unrelated to any current functions and social purposes, is incompatible with an egalitarian social order". The amendment, in fact, made four changes to the then existing Constitution. It deleted Articles 291 and 362 of the Constitution, inserted a new Article 363A and also amends Article 366.

Art.291 dealt with payment of Privy Purse sums of Rulers whereas Article 362 with rights and Privileges of rulers of Indian States. Article 362 mandated the executive and legislature to give due regard to the guarantee or assurance given under any such covenant or agreement as is referred to in Article 291 with respect to the personal rights, privileges and dignities of the Ruler of an Indian State. Both these Articles ceased to exist after 26th Amendment.

The 26th Amendment changed the definition of Ruler as follows:

Prior to this amendment, the definition of 'Ruler' included the successor of any person who was recognized as the Ruler.

The amendment deleted the  'successorship' of the status of ruler.

Insertion of Article 363A

The 26th Amendment also inserted Article 363A to terminate expressly the recognition already granted to such Rulers and to abolish privy purses and extinguish all rights, liabilities and obligations in respect of privy purses. The text of the Article reads as follows:

In short, the amendment derecognized the titles such as 'Ruler' and also abolished the privy purse and all rights, liabilities and obligations in respect of privy purse.

SC Rejected Challenge Against 26th Amendment
Sri Raghunathrao Raja, who was the Co-Ruler of Indian State of Kurundwad, challenged the constitutional validity of the Constitution (Twenty-sixth Amendment) Act of 1971 on the ground that it violates the basic structure and essential features of the Constitution of India and is, therefore, outside the scope and ambit of constituent powers of the Parliament to amend the Constitution as provided under Article 368 of the Constitution. The Constitution Bench which comprised of the then Chief Justice LM Sharma, Justices SR Pandian, S. Mohan, SP Jeevan Reddy and SP Bharucha heard the writ petitions and delivered the judgment in this case. (Raghunathrao Ganpatrao Etc. Etc vs Union Of India )

The Court, while upholding the 26th Constitutional Amendment, held that the Amendment did not offend Article 14 or 19(g). It further held that no principle of justice, either economic, political or social is violated by the Twenty-sixth Amendment. Political justice relates to the principle of rights of the people, i.e. right to universal suffrage, right to democratic form of Government and right to participation in political affairs, the court said.

Coming back to the Padmanabhaswamy case, one of the important legal issues considered by the bench was on the impact of the deletion of Article 362 on legislations enacted prior to it. The precise question was whether the deletion by itself would result in cessation of every privilege or personal right with respect to which "due regard" was had while exercising legislative power in terms of Article 362 before its deletion.?(Article 362 had stated that while exercising legislative powers by Parliament or State Legislatures, due regard should be given to the guarantee or assurances given under the covenant of accessions with regard to the personal rights, privileges and dignities of the Ruler of an Indian State)

Answering this issue in negative, the Court held that, despite deletion of Article 362, if the concerned legislation -which had given due regard to the rights or the rulers as per the guarantees under the instruments of accession - continue to remain in operation, the personal rights or privileges could still be enjoyed.

Even after the 26th Constitution amendment, Section 18 of the Travancore Cochin Hindu Religious Institutions Act continued to recognize the rights of the 'Ruler of Travancore' over the temple.

The Court noted that the source of the rights of the 'Ruler of Travancore' was the TC Act.

"...unlike Privy Purses, the termination of which was intended to be immediate and therefore the source for Privy Purses, namely, Article 291 itself was deleted, the deletion of Article 362 by itself would no result in the cessation of every privilege or personal right to which "due regard" was had while exercising legislative power in terms of Article 362 before its deletion.

The source being in the statutory enactments, despite deletion of Article 362, f the concerned legislation continue to remain in operation, the personal rights or privileges could still be enjoyed", the Court held.

The court, in this regard, further observed:

That is precisely why, on the strength of various statutory provisions certain benefits in the form of personal rights or privileges are still available. It is for the concerned legislatures to take appropriate steps in accordance with law, either to terminate the effect and operation of extension of such benefits or allow them to operate or lessen the extent and cause gradual changes as was sought to be undertaken by 1972 Act.

Despite the Constitution (Twenty Sixth Amendment) Act, 1971, the private properties of the Ruler would continue to be available for normal succession and devolution in accordance with the law and custom. Though concepts such as Ruler or Rulership have ceased to operate, succession to the Gaddi as an incident may still operate. For instance, there could be a sword or any other ceremonial weapon, or a sarpech, or heirloom jewellery, which must go by rule of primogeniture, as against the normal way of succession with regard to other personal properties. All such incidents have not been terminated. The clear example is in clause (iv) of sub-section (1) of Section 5 of the Wealth Tax Act, 1957 which uses the expression "jewellery in the possession of any Ruler, not being his personal property" which had been recognized as his "heirloom". Such items or properties which fall in or are connected strictly with element (iii), may descend along with succession to the Gaddi and by very nature must remain impartible. On the other hand, if normal principles of succession are applied, at any given level of succession, such items or properties recognized as "heirloom" may be required to be shared amongst more than one person and would therefore cease to be impartible

Applying this logic to the TCHRI Act provision, the bench further said:

The judgement, however, does not discuss much about the impact of Article 363A even though it was contended by one of the parties that Sections 18(2) and 20 of the TCHRI Act, being against the principles and mandate emanating from Article 363A of the Constitution, are not enforceable. This contention was perhaps ignored in view of the finding on other issues to the effect that the expression "The Ruler of Travancore" was only to locate and describe the person who would be in control and supervision of the administration.
"...the expression "Ruler of Travancore" as appearing in Chapter III of Part I of the TC Act must include his natural successors according to law and custom; and that the Shebaitship did not lapse in favour of the State by principle of escheat", the Court held..
Click here to read judgment
TagsConstitution (Twenty Sixth Amendment) Act Sree Padmanabha Swamy temple Padmanabha Swamy Temple Case Privy Purse #Justice UU Lalit #Justice Indu Malhotra Travancore Royal Family
Next Story
Similar Posts
+ View more
Law Firms
+ More