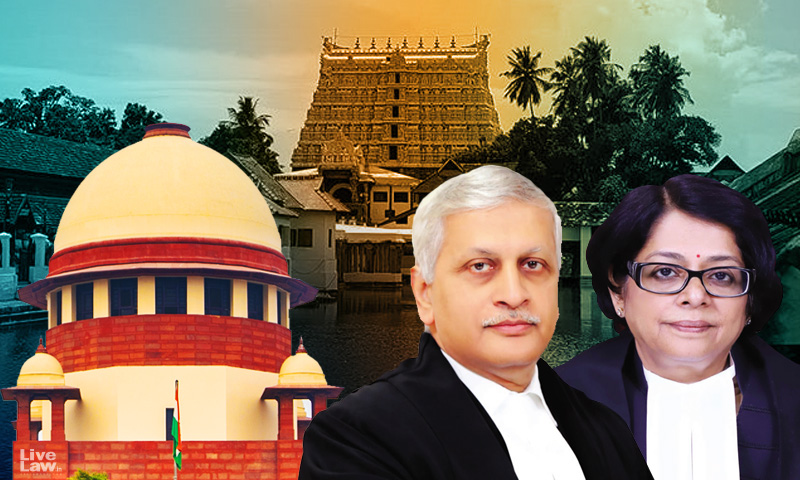 While upholding the rights of the erstwhile Royal Family of Travancore as the shebait of Sree Padmanabha Swamy temple at Thiruvananthapuram, the Supreme Court also directed that the powers of 'the Ruler of Travancore' under the Travancore-Cochin Hindu Religious Institutions Act (TC Act) with respect to temple administration be delegated to the Administrative Committee constituted by...

While upholding the rights of the erstwhile Royal Family of Travancore as the shebait of Sree Padmanabha Swamy temple at Thiruvananthapuram, the Supreme Court also directed that the powers of 'the Ruler of Travancore' under the Travancore-Cochin Hindu Religious Institutions Act (TC Act) with respect to temple administration be delegated to the Administrative Committee constituted by the court.

Notably, the proposals regarding the Administrative Committee and the delegation of powers to it came from the family itself.

On November 6, 2014, the appellants in the Supreme Court (legal heirs of Marthanda Varma), submitted a note regarding the constitution of an "Administrative Committee" and an "Advisory Committee".

The note stated that the "Ruler of Travancore" shall "delegate his powers of administration under Section 18(2) of the TC Act to an Administrative Committee which shall administer the Temple through an Executive Officer to be appointed by the Committee".

The family suggested the following composition for Administrative Committee:

The SC bench comprising Justices U U Lalit and Indu Malhotra accepted the suggestions given by the erstwhile Royal Family with regard to the constitution of the Administrative Committee and the Advisory Committee to administer and manage the Sree Padmanabhaswamy Temple.

The Court termed that the course suggested by the Family "quite balanced and broad based" and "not be loaded in favour or against the Trustee" when compared to the scheme of administration contemplated in the TC Act.

"As against the administration contemplated by Chapter III of Part I of the TC Act in the hands of the Ruler of Travancore in absolute terms, the course now suggested by the appellants is quite balanced", the bench observed.

The Court also ordered that the powers of the "Ruler of Travancore" under Section 18(2) will stand delegated to the Administrative Committee.

In this regard, the court said:

So the Administrative Committee, as directed by the Supreme Court, will contain the following members

The Court also clarified that all the members including the Chairpersons of the Administrative Committee and the Advisory Committee must be Hindus and fulfil the requirements in Section 2(aa) of the TC Act.

The Court also, taking into account the specific submission made by the Family, said that they shall not be entitled to draw any remuneration for his or their services as the Manager or Trustee. The Executive Officer appointed by the Administrative Committee shall be entitled to a modest and reasonable remuneration to be fixed by the Administrative Committee, it added.

The Court proceeded on the premise that the temple is a "public temple".

Padmanabha Swamy Temple : Administrative/Advisory Committees To Consider Whether 'Kallara B' Should Be Opened; SC Refuses To Decide Controversial Issue

(d) Shall take appropriate steps to return to the State the amounts expended by the State Government as catalogued in the Chart in paragraph No.44 hereinabove (Rs 11,70,11,000).