Right To Default Bail Is Enforceable Even If Charge Sheet/Report Seeking Extension Of Time Is Subsequently Filed: SC [Read Judgment] 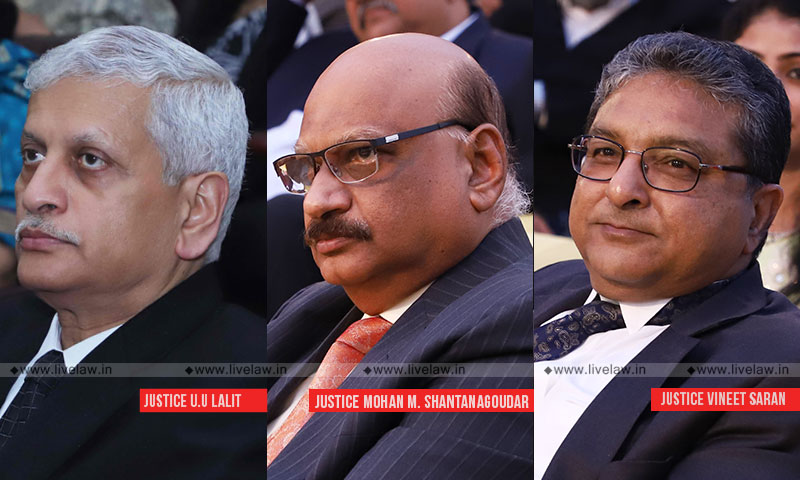 The Supreme Court has observed that where the accused has already applied for default bail, the Prosecutor cannot defeat the enforcement of his indefeasible right by subsequently filing a final report, additional complaint or report seeking extension of time.The bench comprising Justices Uday Umesh Lalit, Mohan M. Shantanagoudar and Vineet Saran, while allowing an...

The Supreme Court has observed that where the accused has already applied for default bail, the Prosecutor cannot defeat the enforcement of his indefeasible right by subsequently filing a final report, additional complaint or report seeking extension of time.

The bench comprising Justices Uday Umesh Lalit, Mohan M. Shantanagoudar and Vineet Saran, while allowing an appeal against a Madras High Court judgment, summarized the legal position in this regard, as follows:

In this case, the High Court had dismissed the default bail application observing that merely because the said application was not disposed of by the time the additional complaint was filed, the accused  could not take advantage of the fact that he had filed his bail petition prior in time. In appeal, the Apex Court considered the following issues: (a) Whether the indefeasible right accruing to the appellant under Section 167(2), CrPC gets extinguished by subsequent filing of an additional complaint by the investigating agency; (b) Whether the Court should take into consideration the time of filing of the application for bail, based on default of the investigating agency or the time of disposal of the application for bail while answering (a).

The Court noted that both these issues have been answered in the judgment Uday Mohanlal Acharya v. State of Maharashtra, (2001) 5 SCC 453. It said that Section 167(2) is integrally linked to the constitutional commitment under Article 21 promising protection of life and personal liberty against unlawful and arbitrary detention, and must be interpreted in a manner which serves this purpose.

"With respect to the CrPC particularly, the Statement of Objects and Reasons (supra) is an important aid of construction. Section 167(2) has to be interpreted keeping in mind the threefold objectives expressed by the legislature namely ensuring a fair trial, expeditious investigation and trial, and setting down a rationalized procedure that protects the interests of indigent sections of society. These objects are nothing but subsets of the overarching fundamental right guaranteed under Article 21."

The Court noted that the Constitution Bench in Sanjay Dutt v. State through C.B.I., (1994) 5 SCC 410, has held that the indefeasible right accruing to the accused [to a default bail]  is enforceable only prior to the filing of the challan and it does not survive or remain enforceable on the challan being filed, if already not availed of. The bench then discussed the meaning of " if not already availed of " in Sanjay Dutt judgment. The state relied on the judgment in  Pragyna Singh Thakur v. State of Maharashtra, (2011) 10 SCC 445, wherein it was held, in reliance upon Sanjay Dutt (supra), that where an application for bail is filed on the ground of non­filing of the chargesheet within the prescribed period, the said right to bail would be extinguished if the prosecution subsequently files a chargesheet before consideration of the application and the release of the accused.

"We find that the opinion expressed in Pragyna Singh Thakur that the right to bail can be considered only on merits once the chargesheet is filed, is based on an erroneous interpretation of the conclusions of the Constitution Bench in Sanjay Dutt. As mentioned supra, the expression "if not already availed of" used in the Constitution Bench decision has been misinterpreted by the Courts, including the two­Judge Bench in Pragyna Singh Thakur, to mean that the accused can only avail of the right to default bail if he is actually released prior to the filing of the chargesheet. However, this Court in Uday Mohanlal Acharya (supra) has correctly understood and analysed the principles stated in the case of Sanjay Dutt before coming to its conclusion as stated above. We are of the firm opinion that the view taken in Uday Mohanlal Acharya is a binding precedent. It has been followed by a subsequent three ­Judge Bench in Sayed Mohd. Ahmad Kazmi (supra). Hence, the opinion rendered by the two­J udge Bench in paragraphs 54 and 58 of Pragyna Singh Thakur, to the effect that "even if an application for bail is filed on the ground that charge­sheet was not filed within 90 days, but before consideration of the same and before being released on bail, the said right to be released on bail would be lost" or "can only be on merits", must be held per incuriam."

"The observations made in Hitendra Vishnu Thakur (supra) and Sanjay Dutt (supra) to the effect that the application for default bail and any application for extension of time made by the Public Prosecutor must be considered together are, in our opinion, only applicable in situations where the Public Prosecutor files a report seeking extension of time prior to the filing of the application for default bail by the accused. In such a situation, notwithstanding the fact that the period for completion of investigation has expired, both applications would have to be considered together. However, where the accused has already applied for default bail, the Prosecutor cannot defeat the enforcement of his indefeasible right by subsequently filing a final report, additional complaint or report seeking extension of time."

It must also be added and it is well settled that issuance of notice to the State on the application for default bail filed under the Proviso to Section 167(2) is only so that the Public Prosecutor can satisfy the Court that the prosecution has already obtained an order of extension of time from the Court; or that the challan has been filed in the designated Court before the expiry of the prescribed period; or that the prescribed period has actually not expired. The prosecution can accordingly urge the Court to refuse granting bail on the alleged ground of default. Such issuance of notice would avoid the possibility of the accused obtaining default bail by deliberate or inadvertent suppression of certain facts and also guard against multiplicity of proceedings. However, Public Prosecutors cannot be permitted to misuse the limited notice issued to them by the Court on bail applications filed under Section 167(2) by dragging on proceedings and filing subsequent applications/reports for the purpose of 'buying extra time' and facilitating filling up of lacunae in the investigation by the investigating agency.

In facts of the case, the court noted that the accused had filed application for default bail on the 181st day of his arrest and it was only after it an additional complaint came to be lodged. Therefore, the bench said that the accused was entitled to be released on bail notwithstanding the subsequent filing of an additional complaint. While setting aside the High Court order, the bench observed:

"It is clear that in the case on hand, the State/the investigating agency has, in order to defeat the indefeasible right of the accused to be released on bail, filed an additional complaint before the concerned court subsequent to the conclusion of the arguments of the Appellant on the bail application. If such a practice is allowed, the right under Section 167(2) would be rendered nugatory as the investigating officers could drag their heels till the time the accused exercises his right and conveniently files an additional complaint including the name of the accused as soon as the application for bail is taken up for disposal. Such complaint may be on flimsy grounds or motivated merely to keep the accused detained in custody, though we refrain from commenting on the merits of the additional complaint in the present case. Irrespective of the seriousness of the offence and the reliability of the evidence available, filing additional complaints merely to circumvent the application for default bail is, in our view, an improper strategy."