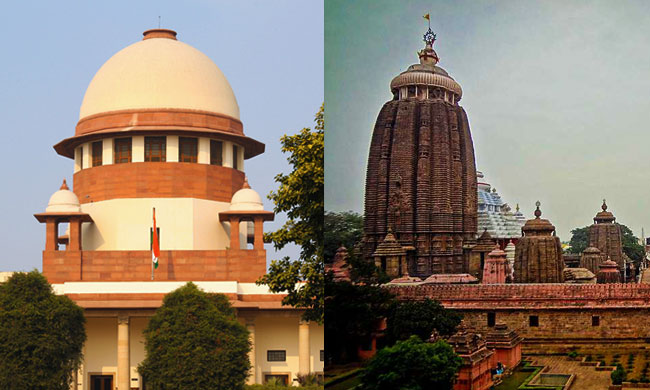 The Supreme Court on Monday issued detailed directions for proper administration of Sri Jagannath temple at Puri. On a perusal of the report submitted by Amicus Curiae Gopal Subramanium, suggestions given by Srimad Jagadguru Shankaracharya and Swami Nishchalanand Saraswati and the response filed by the Temple Managing Committee, the court said, "It is apparent that various aspects...

On a perusal of the report submitted by Amicus Curiae Gopal Subramanium, suggestions given by Srimad Jagadguru Shankaracharya and Swami Nishchalanand Saraswati and the response filed by the Temple Managing Committee, the court said,

"It is apparent that various aspects have to be gone into and considered by the Temple Managing Committee and wherever the Government role comes in, the Government has to do the needful after taking all the stakeholders into confidence."

With this observation, the bench of Justices Arun Mishra, M.R. Shah and S. Ravindra Bhat directed the appointment of a full time Chief Administrator for the temple, forthwith.

With regards upliftment of the facilities available in the temple, the court said, "When there is a vast congregation of people, it becomes the Government's duty to ensure welfare, law and order, hygiene and provide proper amenities and sanitation facilities."

With regards the facilities to be provided to servitors of the temple, the court directed:

Moreover, in light of a recent event whereby a sevak, who was entrusted with the duty of opening the door of temple Sanctum at 4.30 a.m. for daily puja/nitis, not opening the door on the ground of his personal issues, the court said,

"Deities cannot be permitted to be disregarded by non­performance of the nitis, puja and ritual in the traditional form." Thus, for the protection of the sanctity and ethos of the temple, the bench directed:

1. The Chief Administrator of the Temple to take appropriate steps against servitors/ incumbents, who create obstruction in seva/ puja/ niti in the temple and/ or are involved in misbehavior against the employees of the Temple Administration or with devotees;

2. The Temple Management Committee to invite Srimad Jagadguru Shankaracharya and other stakeholders to ensure that nitis, puja and ritual are performed regularly and punctually, as per the rituals, without any remiss and obstruction;

Further stating that it was a pious duty to provide proper darshan to the pilgrims in systematic and peaceful manner, the court directed the Temple Management Committee and Chief Administrator, in coordination with the experts, to suggest a system in this regard, without disturbing the rituals.

In order to ensure that the temple funds are utilized properly, the court directed:

1. The Temple Managing Committee to prepare an inventory of the immovable properties of the temple, within and outside the State, with details on how they are being utilized also how much income is generated from them. Directions were further issued to the Amicus Curiae to prepare a Record of Rights for other properties of the temple within 6 months;

2. The Temple Managing Committee to prepare a list of quarries and mines of the Temple with details as to how they are being managed, who is operating them, on what basis and what is the income of the Temple from them and the outstanding dues;

3. The Temple Management to place on record the inventory of valuables of the Temple and details as to how it proposes to secure such valuables.

Lastly, in order to ensure proper security in the premises of the temple, the court directed that:

1. The servitors and staff should be provided with I­Cards so that unscrupulous persons are not able to present themselves as servitors and the people are not misled on the basis of wrong identity.

2. In order to ensure that pilgrims are not harassed for obtaining donations, strict control and discipline with suitable and swift mechanism to punish the erring, should be put in place.

3. The Temple Administration and the Temple Police should tighten security inside the temple by deploying a dedicated section of personnel, so as to ensure that no misbehavior is meted out to women.

The aforesaid directions have been made in a petition filed in the wake of the disappearance of keys of Ratna Bhandar, which stores the valuables of the shrine, of Shri Jagannath Temple. The PIL sought appointment that an inventory be maintained of the contents of Ratna Bhandar and that an expert committee be appointed to submit a report for preservation and management of property and valuables of the temple.

Considerably, in June last year, the court had directed the Odisha government and the authorities concerned to prevent exploitative practices at the temple besides bringing in proper management scheme. A series of directions were also passed thereon. Subsequently, the order was extended to all religious places in India with clarification that a devotee could approach the district judge of any area with complaint of any exploitative practice, deficiencies in the management, maintenance of hygiene, proper utilization of offerings and protection of assets at any shrine.

The matter has now been posted for January 8, 2020, for consideration of the action taken report.