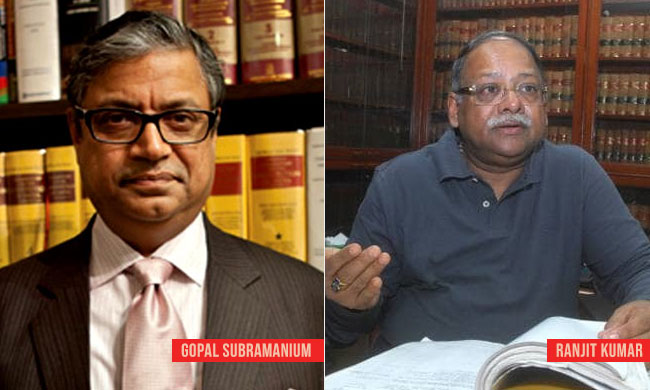 The Supreme Court Wednesday appointed senior advocate and former Solicitor General Ranjit Kumar as amicus curiae to assist it in a matter related to administration of Jagannath temple in Puri.

The apex court had on November 30 last year accepted the request of senior advocate Gopal Subramanium to relieve him as amicus curiae in the matter.

During the hearing on Wednesday, the issue of appointing a new amicus in the case arose before a bench headed by Justice A K Sikri.

The bench requested Kumar, who was present in the court, whether he would assist it as an amicus in the case.

The bench has posted the matter for hearing on February 5.

An advocate, who has filed an application in the court seeking intervention in the case, told the bench that person having knowledge about Jagannath temple should be appointed as an amicus.

To this, the bench said, "What are those allegations? We will see".

However, the counsel who had filed the application said his plea was dismissed earlier by the court.

He said he had "simply" said in his application that salary of 'sevaks' (staff) of the temple was not given since July 5 last year and it should be released immediately.

He said some concrete steps were required to be taken in the matter since violence had erupted there in October last year.

Nine policemen were injured in the violence at Puri during a 12-hour bandh called by a socio-cultural organisation protesting the introduction of a queue system for devotees visiting the temple, police had said.

The bench said applications filed by other stakeholders in the matter would also be considered on February 5.

On June 6 last year, the court had appointed Subramanium as an amicus curiae to assist it in the matter in which a plea was filed highlighting the difficulties faced by the devotees at Jagannath temple and their alleged harassment or exploitation by the 'sevaks' of the temple.

On October 10, the apex court had said that no policeman should enter Jagannath temple "with weapons and shoes" after it was alleged before it that during the October 3 violence at the shrine, cops had entered there with boots and guns.

The Odisha government's counsel had termed the allegations as "absolutely false" and said no policeman had entered the temple as the incident had taken place at office of Shree Jagannath temple administration which is situated around 500 metres from the main temple.

In July last year, the top court had directed the Jagannath temple management to consider allowing every visitor, irrespective of faith, to offer prayers to the deity.

However, it had said that it would be subject to regulatory measures regarding dress code and giving an appropriate declaration.

It had directed the Centre to constitute a committee to look into the issues raised by the district judge of Puri regarding alleged exploitation of devotees, abolishment of hereditary Sevaks and appointment of Sevaks in the temple.