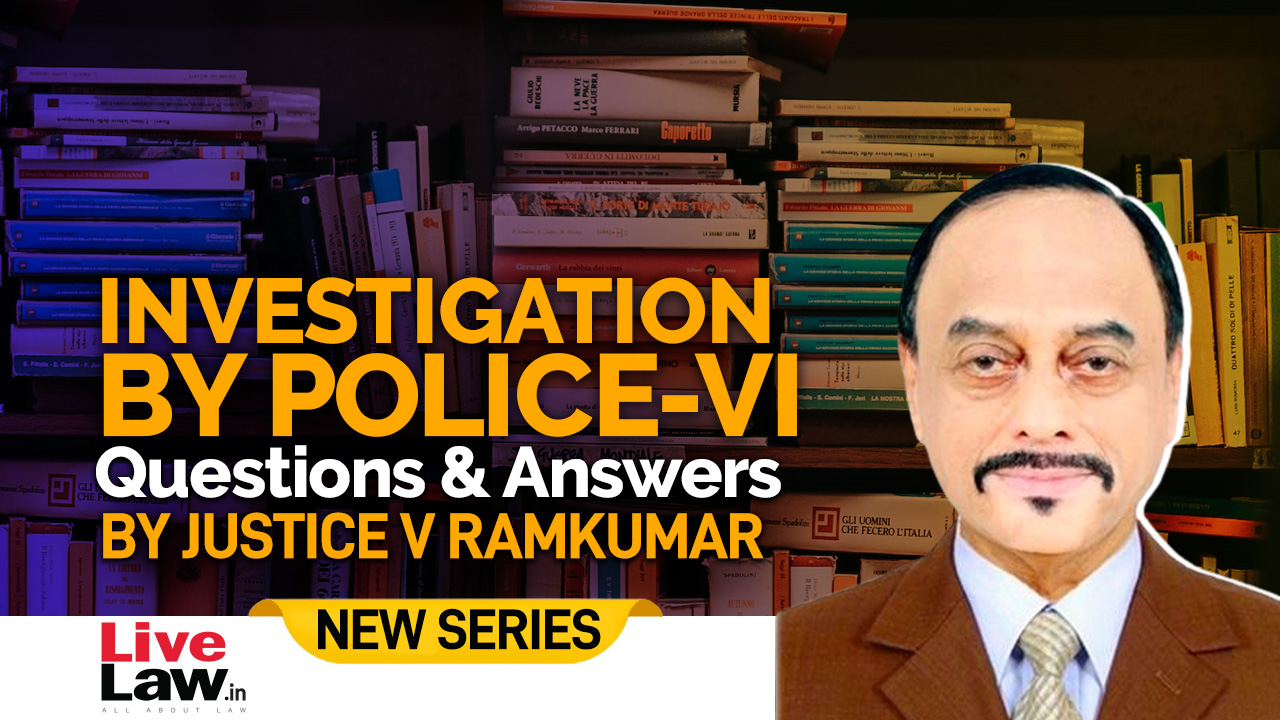 A1. INVESTIGATION BY THE POLICE – Part VIQ.26 Supposing the SHO refuses to register an FIR, what is the remedy of the informant? Ans. Supposing the SHO refuses to record the "information" received under Section 154 (1) Cr.P.C and to register an FIR, the person aggrieved may send, in writing and by post, the substance of such "information", to the Superintendent of Police of...

A1. INVESTIGATION BY THE POLICE – Part VI

Q.26 Supposing the SHO refuses to register an FIR, what is the remedy of the informant?

Ans. Supposing the SHO refuses to record the "information" received under Section 154 (1) Cr.P.C and to register an FIR, the person aggrieved may send, in writing and by post, the substance of such "information", to the Superintendent of Police of the District ("DSP" for short). The DSP, if satisfied that such "information" discloses the commission of a cognizable offence, shall either investigate the case himself or direct an investigation to be made. (Vide Section 154 (3) Cr.P.C.).

Q.27 Can the SHO conduct a verification or inquiry before registering an FIR?

Ans. Even though registration of an FIR by the SHO upon receipt of "information" relating to the commission of a cognizable offence is a must, in certain category of cases there is a Judge-made law that the SHO need not straightaway register an FIR. He can conduct a preliminary verification (preliminary inquiry) to find out whether the information reveals the commission of a cognizable offence or not. (Vide paras 49, 72, 73, 114, 120.6 of Lalita Kumari (Supra.) and Ramdev Food Products Pvt. Ltd. v. State of Gujarat (2015) 6 SCC 439 = AIR 2015 SC 1742 – 3 Judges - T. S. Thakur, A. K. Goel, R. Banumathi - JJ. The following are those category of cases:-

(In Prevention of Corruption (Amendment) Act, 2018 (Central Act 16/ 2018) a new provision as Section 17A has been inserted in the P.C. Act 1988 with effect from 26-07-2018. It says that no police officer shall conduct an "enquiry", "inquiry" or "investigation" into an offence relatable to any recommendation made or decision taken by a public servant, without the previous approval of the authority competent to grant prosecution sanction under Section 19 of the P. C. Act. The expressions "enquiry" and "inquiry" have not been defined. In the State of Kerala, at the Government level, the expression "enquiry" is understood as Vigilance Enquiry at the departmental level and the expression "inquiry" including preliminary inquiry is the one ordered by the Special Court.)

Q.28 Can there be more than one FIR (a second FIR) registered in respect of the same case ?

Ans. The case-law on the point is given below:-

(a) There can be no second FIR and no fresh investigation on receipt of every subsequent information relating to the same cognizable offence or the same occurrence which gave rise to one or more cognizable offences. The SHO has to investigate not merely the cognizable offence which was reported in the FIR but also other connected offences which are found to have been committed in the course of the same transaction or in the same occurrence and file one or more reports as provided under Section 173 Cr.P.C. Even if after the conclusion of investigation pursuant to the filing of the FIR and submission of the final report under Section 173 (2) Cr.P.C., the SHO comes across any further information pertaining to the same incident, he can, with the leave of the Court, make further investigation under Section 173 (8) Cr.P.C. (Vide T.T. Antony v. State of Kerala (2001) 6 SCC 181 = AIR 2001 SC 2637 – Syed Shah Mohammed Quadri, S. N. Phukan - JJ).

(b) The legal position is that there cannot be two FIRs against the same accused in respect of the same case. But, when there are rival versions in respect of the same episode, they could necessarily take the shape of different FIRs and investigation also can be carried on under both of them and by the same agency. (Vide Kari Choudhary v. Sita Devi (2002) 1 SCC 714 = AIR 2002 SC 441 – K. T. Thomas, S. N. Phukan – JJ).

(c) After the first FIR was recorded on the basis of the statement made by the deceased when he was alive, it was not necessary to record a second FIR which had a nexus with the injuries, upon the death of the deceased. But, simply because the SHO made a mistake by recording a fresh FIR, it would not weaken the prosecution case and the entire investigation on the basis of the fresh FIR will not be defective especially when no prejudice is caused to the accused. (Vide Chirra Shivraj v. State of A.P. (2010) 14 SCC 444 = AIR 2011 SC 604 – P. Sathasivam, Anil R. Dave – JJ ).

(e) Two FIRs filed in respect of the same incident. Second FIR quashed by the Court. Held : that pursuant to the quashing of the second FIR charge-sheet filed on the basis of investigation conducted on the allegations in the second FIR cannot survive. Direction of the High Court that the charge-sheet arising out of the second FIR is to be read along with the first FIR, is not sustainable. (Vide Babubhai v. State of Gujarat (2010) 12 SCC 254 – P. Sathasivam, Dr. B. S. Chauhan – JJ).

(f) Lodgment of two FIRs impermissible in respect of one and the same incident. A second FIR registered on the basis of a direction issued by the Magistrate under section 156 (3) Cr.P.C. would be maintainable, if after examining the involvement of number of accused persons and the nature of allegations, what emerges is that the second FIR was registered under a different spectrum and that the allegations made were distinct and separate. (Vide Surender Kaushik v. State of U.P. (2013) 5 SCC 148 = AIR 2013 SC 3614 – K. S. Radhakrishnan, Dipak Mishra - JJ).

(g) What was forwarded to the jurisdictional Magistrate was the FIR registered on the basis of the second complaint lodged by the complainant. Quashing of the later FIR would amount to setting at naught the criminal law which had already been set in motion. Hence, the later FIR will prevail. (Vide Kasaiah D. v. Sunkara Srinivasulu 2013 Cri.L.J. 1186 = 2013 KHC 2347 (Andhra) – Pinaki Chandra Ghose – CJ, Vilas V. Afzulpurkar - J.

(h) Tests to determine the registration of two FIRs, explained:

(j) What was held in T.T. Antony v. State of Kerala AIR 2001 SC 2637 was that any further complaint by the same complainant or others against the same accused, subsequent to the registration of a case, is prohibited under the Cr.P.C. because an investigation in this regard would have already started and further complaint against the same accused will amount to an improvement on the facts mentioned in the original complaint and hence will be prohibited under Section 162 Cr.P.C. The said prohibition noticed in Antony's case, does not apply to a counter – complaint by the accused in the first complaint or on his behalf alleging a different version of the incident. (Vide para 17 of Upkar Singh v. Ved Prakash (2004) 13 SCC 292 = AIR 2004 SC 4320 – 3 Judges – N. Santhosh Hegde, S. B. Sinha, A. K. Mattur- JJ). It cannot, therefore, be said that Antony's case has precluded an aggrieved person from filing a counter –case. (Vide para 16 of Upkar Sing (Supra.)

(k) Where the second occurrence is nothing but a fallout of the first occurrence, the two separate complaints lodged and FIR registered can be clubbed together and one charge sheet can be filed. (Vide C. Muniappan v. State of Tamilnadu (2010) 9 SCC 567 – G. S. Singhvi, Dr. B. S. Chauhan - JJ).

(l) The principle that second FIR in case of offences relating to the same transaction is impermissible as laid down in T.T.Antony (2001) 6 SCC 181, has never been diluted in any subsequent judicial pronouncements. Situations not covered by the above rule are –

(a) a second FIR is permissible in case of "cross-cases", and

(m) Just because a second FIR regarding the death of the deceased has been recorded, the accused cannot take advantage of the same in the absence of any prejudice having been suffered by him and in the absence of any fresh investigation pursuant to the second FIR and there is no allegation that the facts stated in the second FIR were incorrect or malicious or that there was any oblique motive behind the further information due to the death of the victim as a result of septicaemia. (Vide para 14 to 21 of Chirra Shivraj v. State of A.P. (2010) 14 SCC 444 = AIR 2011 SC 604 – P. Sathasivam, Anil R. Dave - JJ).

(n) If the State police did not make a fair investigation and left out the conspiracy aspect of the matter from the purview of its investigation, as and when the same surfaced, it was open to the State Government by virtue of its power of supervision vested in it in terms of Section 3 of the Police Act, 1861 and which power is unrestricted by Section 36 Cr.P.C (or to the High Court), to direct further investigation in terms of Section 173 (8) Cr.P.C in respect of an offence which is distinct and separate from the one for which the FIR had already been lodged. The second FIR would be maintainable not only because there were different versions and new discovery was made but also the second FIR lodged by the CBI was on a wider canvas involving conspiracy of a large number of persons. (Vide paras 44 to 53, 57, 58 and 67 of Nirmal Singh Kahlon v. State of Punjab (2009) 1 SCC 441 = AIR 2009 SC 984 – S. B. Sinha, Aftab Alam – JJ; Varshaben Kantilal Purani v. State of Gujarat (2019) 11 SCC 774 = 2019 KHC 7328 (SC) – 3 Judges - Dr. A. K. Sikri, Ashok Bhushan, Ajay Rastogi – JJ. )

(p) Where the SHO deliberately did not register the FIR on receipt of the first information about a cognizable offence, subsequently registered an FIR after due deliberation, consultation and discussion, such FIR will be hit by Section 162 Cr.P.C. (Vide State of A.P. v. Punati Ramulu 1994 Supp. 1 SCC 590 = AIR 1993 SC 2644 – A. S. Anand, M. P. Singh - JJ).

Q.29 Are the Police bound to register an FIR as if in a cognizable offence, in the case of a missing person?

Ans. Yes. Very often State Police Acts or allied statutory measures provide for the registration of an FIR by the SHO in "man missing cases". The relevant provision in the Kerala Police Act, 2011 is Section 57 which directs the State Police to attempt to locate missing persons after registering any information received in the same manner as in the case of a cognizable offence and to take immediate action to locate the missing person. The said provision in the Kerala Police Act has been highlighted by a Division Bench of the Kerala High Court in Anil Kumar V.R. v. Sathi Kumari 2012 (1) KLT 641 = 2012 (1) KHC 531 (DB) – Thottathil B. Radhakrishnan, C. T. Ravikumar - JJ. The said decision has also directed that in case the missing person has been finally traced out, the police shall not release him. He shall be produced before the Magistrate having jurisdiction and the Magistrate will decide whether the missing person should be allowed to go or not. The Division Bench also clarified that it is not for the police to decide whether the missing person was under illegal detention or not and that the judiciary alone can decide that question.

Q.30 Where it is alleged that the FIR was ante-timed, what are the tests to find out the same ?