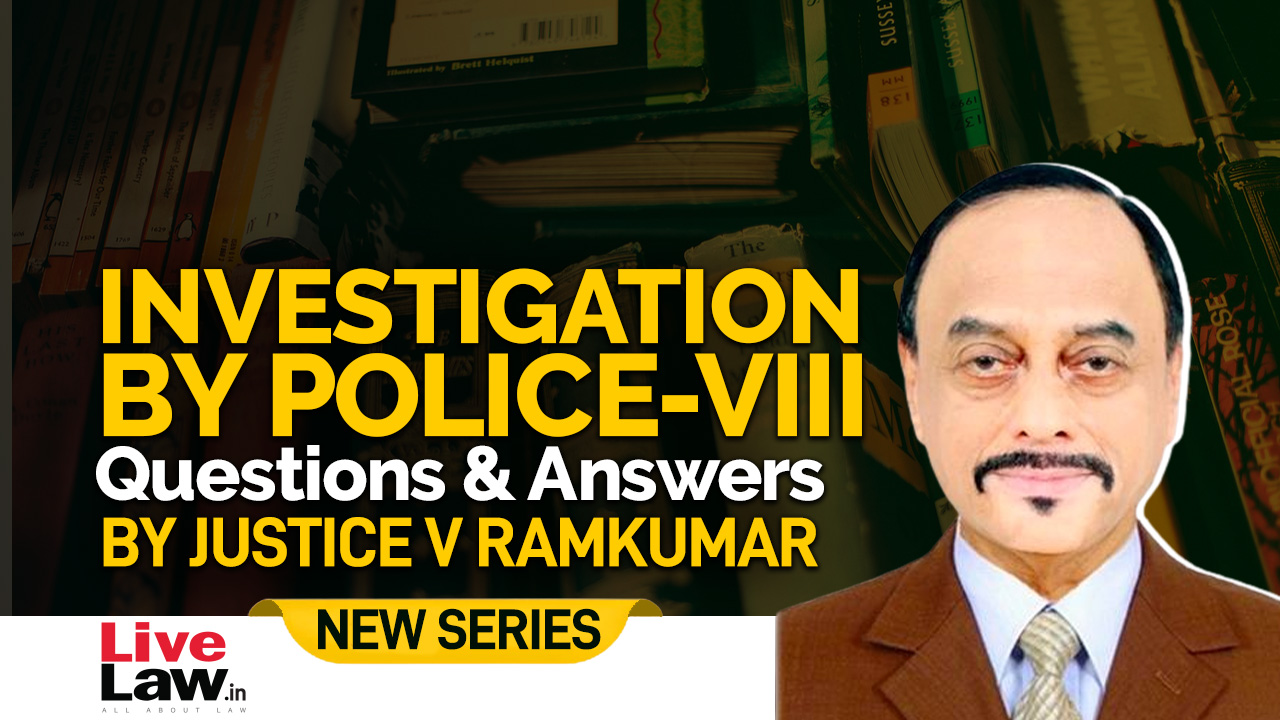 Q.36 Can police investigation be depicted by means of a chart ? Ans. Q.37 What are the various steps of investigation to be carried out by an investigating Police Officer? Ans. S.2(h) of the Code defines investigation which reads as under: '(h) 'investigation' includes all the proceedings under this Code for the collection of evidence conducted by a police...

Q.36 Can police investigation be depicted by means of a chart ? 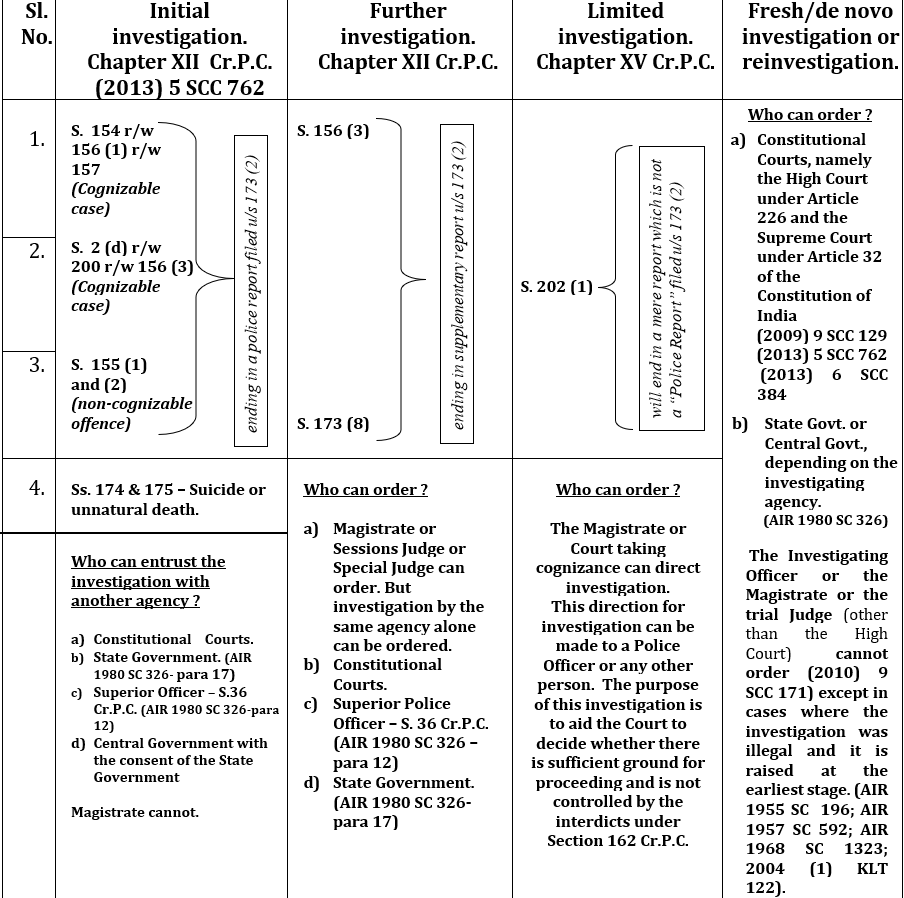 Q.37 What are the various steps of investigation to be carried out by an investigating Police Officer?

Ans. S.2(h) of the Code defines investigation which reads as under:

'(h) 'investigation' includes all the proceedings under this Code for the collection of evidence conducted by a police officer or by any person (other than a Magistrate) who is authorized by a Magistrate in this behalf;.'

Under the scheme of the Code, investigation ordinarily commences with lodgment of "information" relating to the commission of an offence. If it is a cognizable offence, the officer - in - charge of the police station, to whom the information is supplied orally, has a statutory duty to reduce it to writing and get the signature of the informant. He shall enter the substance of the information, whether given in writing or reduced to writing as aforesaid, in a book prescribed by the State in that behalf. The officer - in - charge has no escape from doing so if the offence mentioned therein is a cognizable offence and whether or not such offence was committed within the limits of that police station. But when the offence is non - cognizable, the officer - in - charge of the police station has no obligation to record it if the offence was not committed within the limits of his Police Station. Investigation thereafter would commence and the investigating officer has to go step by step. The Code contemplates the following steps to be carried out during such investigation:

(1) Proceeding to the spot;

(2) ascertainment of the facts and circumstances of the case;

(3) discovery and arrest of the suspected offender;

(a) the examination of various persons (including the accused) and the reduction of their statements into writing, if the officer thinks fit,

(b) the search of places or seizure of things considered necessary for the investigation and to be produced at the trial; and

(5) formation of the opinion as to whether on the material collected there is a case to place the accused before a Magistrate for trial and, if so, to take necessary steps for the same by the filing of a charge - sheet under S.173.

Q.38 Is receipt of "information" a condition precedent for starting of investigation?

NOTE BY VRK:- Cases where a police party detecting a cognizable offence while on patrol duty and submitting a suo motu report regarding the offence and the consequent registration of an FIR, will be covered by this Section.

Again in State v. V. Jayapaul (2004) 5 SCC 223 = AIR 2004 SC 2684 - Ruma Pal, P. Venkatarama Reddy – JJ. we have seen the Police Officer not convinced by the cryptic, vague and discreet information which he got, himself conducted a probe and finally figured as the "first informant" and submitted a suo motu report. That also falls under "otherwise".

Q.39 Section 157 (1) Cr.P.C. states that if the SHO "has reason to suspect the commission of an offence which he is empowered under Section 156 to investigate", he shall forthwith proceed in person or shall depute one of his subordinates to proceed to the spot to investigate the facts and circumstances of the case. What is the empowerment under Section 156 Cr.P.C. ?

On the question of territorial jurisdiction, we had seen –

Think of a cognizable offence committed at Kochi in Kerala and information is given to the SHO of a Police Station in Punjab. Does the law expect the Punjab Police to come to Kochi and conduct investigation ?

With what expedition and efficacy can the Punjab Police having the constraints of language barrier and other problems, complete the investigation and submit the police report before the Magistrate ?

Where will he submit the Police report ?

Is it before the Magistrate having jurisdiction over the Police station at Punjab for the reason that as per the decision in Trisuns Chemical Industry v. Rajesh Agarwal AIR 1999 SC 3499 – K. T. Thomas, M. B. Shah – JJ, any Magistrate can take cognizance of an offence ?

If so, can the Magistrate at Punjab try the offence ?

Going by Section 156 (1) read with Section 177 Cr.P.C. is it not the Magistrate at Kochi competent to try the offence ?

Will it not be necessary for the Punjab Police to again visit Kochi for the purpose of giving evidence with the same disadvantage of the language barrier and other constrains?

Instead, if the Punjab Police, acting strictly under Section 156 (1) Cr.P.C. as interpreted in Punati Ramulu AIR 1993 SC 2644, were to register an FIR and transfer the same to the Police station concerned at Kochi and if the Kochi Police were to conduct investigation and submit the Police Report before the Magistrate at Kochi, would it not be legally and practicably proper ?

In the case of a private complaint also, Section 201 Cr.P.C. envisages a situation where a complaint is made to a Magistrate who is not competent to take cognizance of the offence. If the complaint is in writing, Section 201 (a) obliges the Magistrate to return the complaint for presentation to the proper Court. If the complaint is an oral complaint, Section 201 (b) obliges the Magistrate to direct the complainant to the proper Court. Section 204 Cr.P.C. also contemplates a situation where process to an accused can be issued only by a Magistrate having the jurisdiction to take cognizance of the offence. Going by Section 177 Cr.P.C. every offence shall ordinarily be inquired into and tried by the Court within whose local jurisdiction, the offence was committed. Apart from Section 177 Cr.P.C. Sections 178 to 188 Cr.P.C. also will have to be referred to for deciding the jurisdiction of the Court competent to conduct inquiry trial. So, it is only a Magistrate who has the jurisdiction to take cognizance of an offence who can conduct an inquiry or trial as provided under Chapter XIII Cr.P.C. Trisuns Chemical Industry (Supra – AIR 1999 SC 3499) requires reconsideration by a larger Bench of the Supreme Court of India.

Q.40 Should the copy of the two informations referred to under Section 157 (1) and (2) Cr.P.C be sent to the Magistrate forthwith?