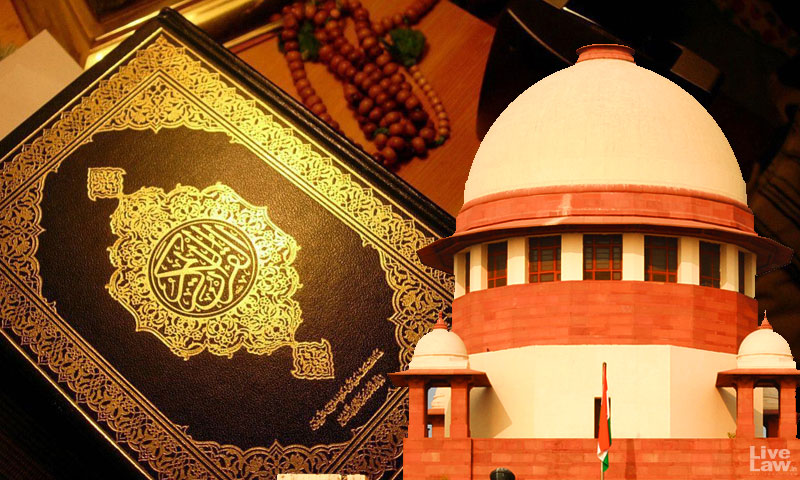 The Supreme Court on Monday dismissed a Writ Petition filed by Former UP Shia Waqf Board chairman Syed Wasim Rizvi seeking removal of certain verses from the Holy Quran that are allegedly preaching violence against non-believers.A bench headed by Justice RF Nariman dismissed the writ petition observing, "this is an absolutely frivolous writ petition".The Court has also imposed Rs. 50000/-...

The Supreme Court on Monday dismissed a Writ Petition filed by Former UP Shia Waqf Board chairman Syed Wasim Rizvi seeking removal of certain verses from the Holy Quran that are allegedly preaching violence against non-believers.

A bench headed by Justice RF Nariman dismissed the writ petition observing, "this is an absolutely frivolous writ petition".

The Court has also imposed Rs. 50000/- as costs on the petitioner for filing the petition.

When the matter was taken, Justice Nariman asked the counsel if he was serious about the petition.

Senior Advocate R K Raizada, appearing for Rizvi, replied that he was confining the prayer to the regulation of Madrassa education. He submitted that the literal interpretation of certain verses preached violence against non-believers, and therefore teaching them can lead to indoctrination of children.

"My submission is that these preachings advocate violence against non-believers. Children are kept at captivity at madrasas at a tender age. Students are not to be indoctrinated. These preachings cannot be in the market place of ideas. I have written to the Central Government for action, but nothing has happened...

Central Govt and Madrasa Boards may be called upon to ensure what steps are taken to avoid literal teaching of verses advocating violence", Raizada submitted.

The bench was not at all inclined to entertain the matter and proceeded to dismiss it with Rs 50,000 costs, after terming the petition 'absolutely frivolous'.

The plea filed by Syed Wasim Rizvi impugns 26 verses from the Quran which he states are used as "justifications" by Islamist Terrorist Groups for attacks on non-believers/ civilians.

"On account of the versus of Holy Quran, (more particularly described in the Writ Petition), the religion of Islam is drifting away from its basic tenets with a fast pace and nowadays is identified with violent behavior, militancy, fundamentalism, extremism and terrorism."

The petition refers to the following verses:

In his plea, Rizvi states that Islam is based on the concepts of equity, equality, forgiveness and tolerance is drifting away from its basic tenets of equity, equality, tolerance and forgiveness. However, due to extreme interpretations of the above-said verses of the Holy Book, the religion of Islam is drifting away from its basic tenets with a fast pace and nowadays is identified with militancy, fundamentalism, extremism and terrorism.

He further alleges that after the demise of Prophet Muhammad, there was dispute regarding the genuineness of some of the heavenly messages of God-the Almighty revealed to Prophet Muhammad and that the Caliphs made a mistake in compiling the Holy Quran.

The plea draws the Court's attention towards two types of verses in the Holy Book:

Messages of Allah which are positive and promote peace, harmony, brotherhood, tolerance and forgiveness (attached as Annexure P-3 to the petition).

Messages of Allah which are negative and promote violence and hatred (attached as Annexure P-4 to the petition).

"Why such wide differences in the messages of God-the Almighty (Allah) in Holy Quran itself ?" the plea remarks.

"the dictates of religion which are not in consonance and overlap with the Law of Land of any nation and any Country passed by the competent elected representatives in the form of parliament/ state legislature and the laws and rules made by the United Nations shall have no strength of Law and are voilative of the Law of the land and the same should not prevail over the same."

Rizvi goes on to allege that several Islamic Madrasas are making contribution to Muslim terrorist activities. The plea states,

"There are many Muslim madrasas all over the world where young children are taught Islam and Holy Quran is explained to the Islamic students who are working for terrorist activities, in the Quranicsurahs as detailed in the preceding paragraphs. It is like poison in the raw minds of young children in the name of the message of Allah, which leads him to a radical mindset and from his early age when they become young, they hate people of other religions because of their mindset, and many youths get involved with terrorist organizations in some way under this mentality, the wrong messages of Allah Has been filled in the name of Islam."

He insists that as per Article 29 and 30 of the Constitution, religious institutions have freedom to teach with liberty. However, they do not have liberty to teach anything illegal, which violates the Law of the Land or the Indian Constitution.

"as per the provisions of Article 25 and 26 of Constitution of India, the freedom of conscious and religion as per clause 1 is subject to public order, morality and health and to the other provisions of this Part, all persons are equally entitled to freedom of conscience and the right freely to profess, practice and propagate religion. Further, any religious custom/ belief hasto be in accordance or within the balance of Constitution of India and as the Law is already settled." Reliance is placed on Shayara Bano v. Union of India & Ors.

In 1987 a petition had been filed in Calcutta High Court by Chandraal Chopra, and Setlal Singh against the State of West Bengal, the respondent, calling upon the latter to show cause why a writ of mandamus should not be issued directing the respondent to declare that each copy of the Koran (Quran).

It was alleged that the Quran incited violence, disturbed public tranquillity, promoted, on grounds of religion, feelings of enmity, hatred and ill-will between different religious communities and insulted the religion or religious beliefs of other communities in India.

It was contended that the publication of the Koran containing the aforesaid offending portions was punishable under Section 153A and Section 295A of the Indian Penal Code and as such came within the mischief of Section 95 of the Cr. P. C., 1973. As a public authority the respondent had a duty to invoke the said Section 95 of the Cr. P. C. and to forfeit all copies of the Koran and seize the same wherever found in India.

"We hold that the Courts cannot sit in judgment over the Koran or the contents thereof in any legal proceedings. Such adjudication of the religion itself is not permissible. Similarly the Courts cannot and will not adjudicate on theories of philosophy or of science or scientific principles".

Any attempt to impugn Koran in the manner as has been sought to be done would infringe the right to freedom of religion including the right to profess, practise and propagate religion.

We take note of the fact that the Koran has been accepted as a holy through the ages. It is read, followed, published and distributed in all civilised countries of the world. There has been no interference with Koran either in India or in any other country up till now. It is too late in the day for the writ petitioners to contend that publication and propagation of Koran would cause disharmony between communities and religions and the tenets of Koran constitute an insult to other religions or communities".