'Said Chowkidaar Chor Hain In A Rhetoric Flourish In the Heat of the Moment': Rahul Gandhi Tells SC In Response to Contempt Notice [Read Counter Affidavit] 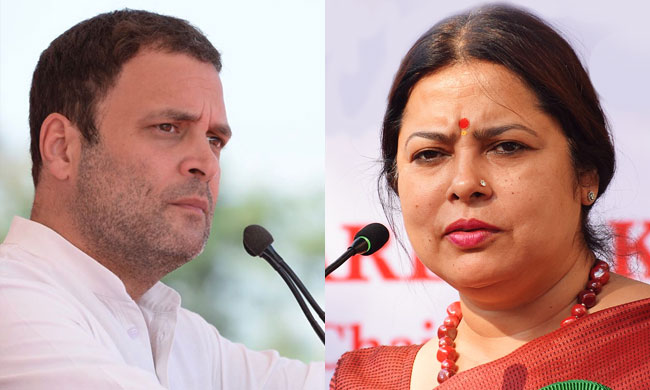 Congress President Rahul Gandhi in his counter affidavit in response to the notice issued by the Supreme Court of India over criminal contempt petition filed by BJP MP Meenaksi Lekhi in the Supreme Court aginst him earlier over Chowkidaar Chor Hain remark attributed to the Apex court of the country says that same was used by him "in a rhetoric flourish in the heat of the moment."He says...

Congress President Rahul Gandhi in his counter affidavit in response to the notice issued by the Supreme Court of India over criminal contempt petition filed by BJP MP Meenaksi Lekhi in the Supreme Court aginst him earlier over Chowkidaar Chor Hain remark attributed to the Apex court of the country says that same was used by him "in a rhetoric flourish in the heat of the moment."

He says that statements that were made by him was during a political campaign without a readable copy of the Supreme Court order being available on its website and without him having seen or read the order and that he relied upon electronic and social media reportage and the version of workers and activists surrounding him that time and that he holds the Supreme Court in highest esteem.

Counter affidavit before the top court of the country reads:

"Respondent [Rahul Gandhi] has not done nor remotely intended to do anything to lower the majesty of this Hon'ble Court in any manner whatsoever. There is no intention, direct, indirect, remote, implied or an attempt in any other manner to violate any court order, obstruct the administration of justice, or prejudice or interfere with the due course of any judicial proceedings, or scandalize the court in any manner. The said statements were made by the answering Respondent in Hindi in a rhetorical flourish in the heat of the moment."

No Intention to Bring Supreme Court into the "Political Arena"

Gandhi clarifies in his counter affidavit that he did not have the slightest or remotest intention, desire or even thought process, to bring the court into the "political arena" or bring it into disrepute or attribute to it deliberately or willfully that which the court had not said or meant. He says that his response was based upon the immediate general perception that in the review petition filed in the Rafale case, Supreme Court had reopened the case for hearing, and that the Court having not allowed the shutting out of new facts and documents as desired by the Government and that there was generally a sense of victory and exhilaration amongst those who had been campaigning for inquiry into the Rafale issue.

Views on 'Rafale' and Chowkidar Chor Hain Remark Mixed Up

Congress President says further that at the time he made the statement which was on 10th of April this month, the issues relating to court proceedings got unfortunately juxtaposed and mingled with a political slogan being used extensively by his party as well as him for the last several months, of "Chowkidar Chor Hai", which was a matter of intense and frenzied public debate during the ongoing Lok Sabha elections. However, he says that he had no intentions to attribute the remark of Chowkidar Chor Hain to highest court of the country.

"However, it is ex hypothesi clear and obvious that no court, much less the Apex Court, would adopt, endorse or uphold a political slogan like the above. It is unfortunate that this slogan got intermingled with my comments on and references to the Apex Court's order dated 15.04.2019. My statement was made in the heat of political campaigning. It has been used (and misused) by my political opponents to project that I had deliberately and intentionally suggested that this Court had said Chowkidar Chor Hai! Nothing could be farther from my mind. It is also clear that no court would ever do that and hence the unfortunate references (for which I express regret) to the court order and to the political slogan in juxtaposition the same breath in the heat of political campaigning ought not to be construed as suggesting that the court had given any finding or conclusion on that issue."

All the same Gandhi takes opportunity through his counter affidavit to reaffirm his stand and that of his party over the Rafale Deal being a "tainted transaction and a gross and brazen abuse of executive power and a leading example of the corruption of the BJP Government led by Prime Minister Modi", which Gandhi says, deserves to be investigated thoroughly by a Joint Parliamentary Committee and proceeded against thereafter.