Why SC Held That Ram Janam Bhumi Is Not A Juristic Person? 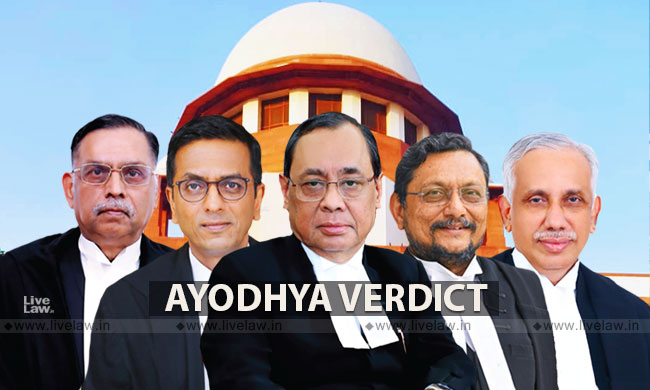 100 pages in the judgment in Ayodhya case deals with the concept of Juristic Personality. The issue became relevant because the plaintiffs in one of the suits were the deity "Bhagwan Sri Ram Virajman" and "Asthan Sri Ram Janam Bhumi, Ayodhya".

The court noted that legal personality of the first plaintiff (Bhagwan Sri Ram Virajman) as represented by the physical idols of Lord Ram at the disputed site is not contested by any of the parties. However, the contention of Senior Advocate K. Parasaran that 'Asthan Shri Ram Janam Bhumi', as a place of religious worship must be elevated to the status of a juristic person by virtue of the faith and belief of the worshippers, was disputed by Dr. Dhawan, who appeared for the other side.

Therefore issues considered by the Court was whether a Swayambhu deity may be recognised absent a physical manifestation. Second, whether land can constitute a manifestation of the deity; and third, whether legal personality can be conferred on immovable property per se?

The court has elaborately dealt with the contentions by discussing the judgments of Supreme Court, Privy Council and High Courts cited by both parties. The argument that 'Asthan Shri Ram Janam Bhumi', is a juristic person was dismissed by the court with following observations:

What is a Swayambhu Deity?

A Swayambhu deity is the revelation of God in a material form which is subsequently worshipped by devotees. The recognition of a Swayambhu deity is based on the notion that God is omnipotent and may manifest in some physical form. This manifestation is worshipped as the embodiment of divinity. In all these cases, the very attribution of divinity is premised on the manifestation of the deity in a material form. Undoubtedly, a deity may exist without a physical manifestation, example of this being the worship offered to the Sun and the Wind. But a Swayambhu is premised on the physical manifestation of the Divine to which faith and belief attaches.

Absence of evidence that the land is a manifestation of God

The difficulty that arises in the present case is that the Swayambhu deity seeking recognition before this Court is not in the form ordinarily associated with the pantheon of anthropomorphised Hindu Gods…The land does not contain any material manifestation of the resident deity Lord Ram. Absent the faith and belief of the devotees, the land holds no distinguishing features that could be recognised by this court as evidence of a manifestation of God at the disputed site.

It is true that in matters of faith and belief, the absence of evidence may not be evidence of absence. However, absent a manifestation, recognising the land as a self-manifested deity would open the floodgates for parties to contend that ordinary land which was witness to some event of religious significance associated with the human incarnation of a deity (e.g. the site of marriage, or the ascent to a heavenly abode) is in fact a Swayambhu deity manifested in the form of land.

Absent that manifestation which distinguishes the land from other property, juristic personality cannot be conferred on the land.

If the argument urged by Mr Parasaran that there is no requirement of a physical manifestation is accepted, it may well be claimed that any area of religious significance is a Swayambhu deity which deserves to be recognised as a juristic personality. This problem is compounded by the fact that worship to a particular deity at a religious site and to the land underlying a religious site are for all intents and purposes, indistinguishable. Hence, in order to provide a sound jurisprudential basis for the recognition of a Swayambhu deity, manifestation is crucial. Absent that manifestation which distinguishes the land from other property, juristic personality cannot be conferred on the land.

Religious diversity undoubtedly requires the protection of diverse methods of offering worship and performing religious ceremonies. However, that a method of offering worship unique to one religion should result in the conferral of an absolute title to parties from one religion over parties from another religion in an adjudication over civil property claims cannot be sustained under our Constitution. This would render the law, which ought to be the ultimate impartial arbiter, conferring a benefit on a party with respect to her or his legal claims, not on the basis of the merits of a particular case, but on the basis of the structure or fabric of the religion to which they belong.

It is true that the connection between a person and what they consider divine is deeply internal. It lies in the realm of a personal sphere in which no other person must intrude. It is for this reason that the Constitution protects the freedom to profess, practice and propagate religion equally to all citizens. Often, the human condition finds solace in worship. But worship may not be confined into a straightjacket formula. It is on the basis of the deep entrenchment of religion into the social fabric of Indian society that the right to religious freedom was not made absolute. An attempt has been made in the jurisprudence of this court to demarcate the religious from the secular. The adjudication of civil claims over private property must remain within the domain of the secular if the commitment to constitutional values is to be upheld. Over four decades ago, the Constitution was amended and a specific reference to its secular fabric was incorporated in the Preamble. At its heart, this reiterated what the Constitution always respected and accepted: the equality of all faiths. Secularism cannot be a writ lost in the sands of time by being oblivious to the exercise of religious freedom by everyone.

The law has till today yet to accept the conferral of legal personality on immoveable property. Religiosity has moved hearts and minds. The court cannot adopt a position that accords primacy to the faith and belief of a single religion as the basis to confer both judicial insulation as well as primacy over the legal system as a whole. From Shahid Gunj to Ayodhya, in a country like ours where contesting claims over property by religious communities are inevitable, our courts cannot reduce questions of title, which fall firmly within the secular domain and outside the rubric of religion, to a question of which community's faith is stronger.