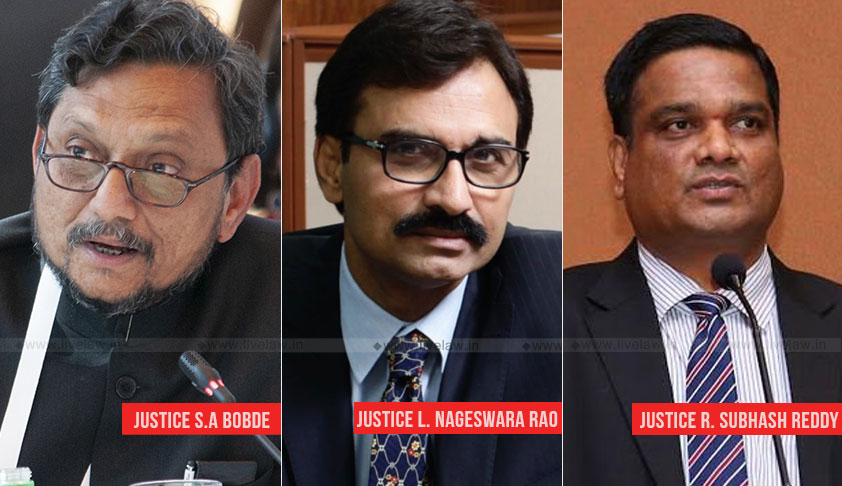 The Supreme Court on Friday commuted to life imprisonment the death sentence, as confirmed by the Madhya Pradesh High Court, of a convicted for the rape and murder of an eight-year old girl. The bench of Justices S. A. Bobde, L. Nageswara Rao and R. Subhash Reddy noted that the appellant was charge-sheeted under Sections 5 and 6 of Protection of Children from Sexual Offences Act, 2012,...

The Supreme Court on Friday commuted to life imprisonment the death sentence, as confirmed by the Madhya Pradesh High Court, of a convicted for the rape and murder of an eight-year old girl.

The bench of Justices S. A. Bobde, L. Nageswara Rao and R. Subhash Reddy noted that the appellant was charge-sheeted under Sections 5 and 6 of Protection of Children from Sexual Offences Act, 2012, in addition to the offences under Sections 302, 363, 366 and 376(2)(i) of the IPC.

Further, The trial court, after appreciation of the evidence, which was mainly circumstantial, came to the conclusion that the appellant has committed rape on a minor girl and murdered her. By recording a finding that the crime is heinous and barbaric and falls within the category of the 'rarest of rare' cases, it imposed the death sentence.

So far as the conviction is concerned, the apex Court was satisfied with the findings of the trial court, based on the appreciation of the oral and documentary evidence on record.

The judgment authored by Justice Reddy reflects that though the case totally rests on circumstantial evidence, it is to be noticed that the deceased's brother, who accompanied her to a 'Mela' on the fateful day, identified the accused in the Test Identification Parade and even categorically stated that the appellant had taken away the deceased from the 'Mela'. A witness has deposed that he saw a dog running away with a leg of a child in its mouth, which, it dropped, on being chased. The investigation resulted in the detection of the headless body of the deceased in the bushes. Another prosecution witness has stated that he had seen the appellant on the same day with a girl wearing a yellow frock.

"By applying the 'last seen' theory to the facts of the case and further considering the forensic and medical evidence on record, trial court has rightly recorded guilt of the accused for the offences alleged. Even the High Court, referring to the relevant evidence on record, has rightly confirmed the conviction of the appellant for the charges leveled against him", the court observed.

Appreciating the appalling facts of the case, the court was of the opinion that the reasons assigned by the trial court, and confirmed by the High Court, do not constitute special reasons within the meaning of Section 354(3) of the Cr.PC to impose death penalty on the accused-

"Taking into account the evidence on record and the totality of the circumstances of the case, and by applying the test on the touchstone of case law discussed above, we are of the view that the case on hand will not fall within the 'rarest of rare' cases".

Accordingly, the top court had allowed the appeal in part; while confirming the conviction, the death penalty is modified to that of life imprisonment with an actual period of 25 years, any benefit of remission having been dispensed with, there being the clarification for the sentences imposed for all offences to run concurrently.

Interestingly, the three-judge bench has rejected the State's reliance on the 2017 judgment in the unfortunate Nirbhaya episode to insist that the instant case also falls in the category of the 'rarest of the rare', distinguishing the former on the facts from the case on hand-

"It is to be noticed that [the Nirbhaya case] is a case of gang-rape and murder of the victim and an attempt to murder of the male victim. It was the specific case of the prosecution that the crimes were carried out pursuant to a conspiracy and the accused were convicted under Section 120-B of the IPC apart from other offences. Further, as a fact, it was found in the aforesaid case that the accused-Mukesh had been involved in other criminal activity on the same night. Further, it is also to be noticed that in the aforesaid case, there was a dying declaration, eye witness to the incident etc. So far as the present case is concerned, it solely rests on circumstantial evidence"

The court weighed in that It is the specific case of the appellant that he was denied proper legal assistance in the matter, that he is a manhole worker aged about 50 years and that there is no finding by the courts below to the effect that there is no possibility of his reformation.

The Bench has finally modified the sentence to that of life imprisonment with actual period of 25 years,without any benefit of remission.