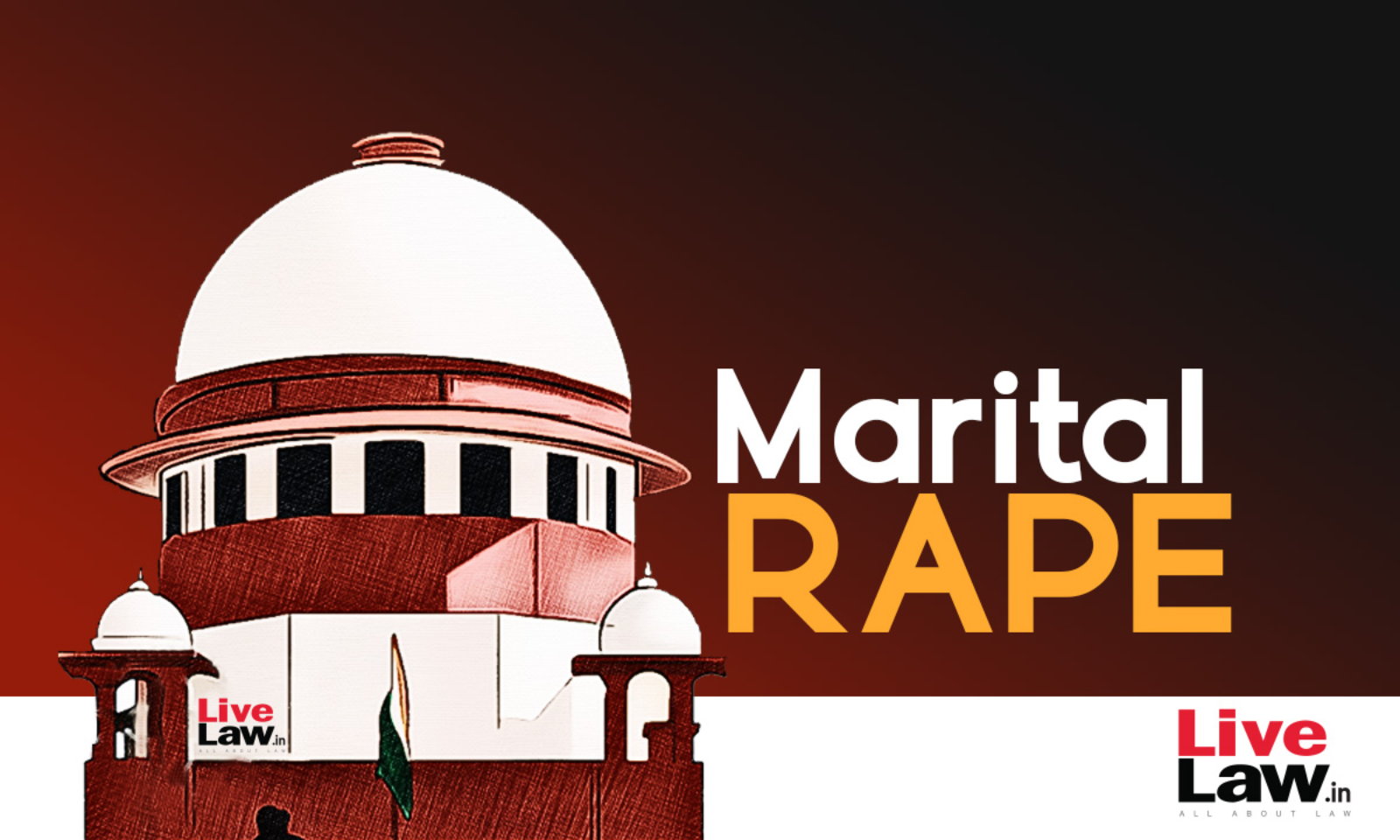 The Supreme Court bench led by Justice DY Chandrachud, on Thursday, held that the meaning of rape must be held to include "marital rape" for the purpose of the Medical Termination of Pregnancy Act and Rules.The Court held that wives, who conceived out of forced sex by their husbands, will also come within the ambit of "survivors of sexual assault or rape or incest" mentioned in Rule 3B(a) of...

The Supreme Court bench led by Justice DY Chandrachud, on Thursday, held that the meaning of rape must be held to include "marital rape" for the purpose of the Medical Termination of Pregnancy Act and Rules.

The Court held that wives, who conceived out of forced sex by their husbands, will also come within the ambit of "survivors of sexual assault or rape or incest" mentioned in Rule 3B(a) of the Medical Termination of Pregnancy Rules. For context, Rule 3B(a)  mentions the categories of women who can seek termination of pregnancy in the term of 20-24 weeks.

The court was pronouncing a judgement stating that unmarried women are also entitled to seek abortion of pregnancy in the term of 20-24 weeks arising out of a consensual relationship(X vs Principal Secretary, Health and Family Welfare Department, Govt of NCT Of Delhi, C.A 5802/2022).

While elaborating upon the rights of married women to terminate pregnancy, Justice DY Chandrachud read this excerpt from the judgement–

"Married women may also form the part of the class of survivors of sexual assault or rape. The ordinary meaning of the word rape is sexual intercourse with a person without consent or against their will. Regardless of whether such forced intercourse occurs in the context of matrimony, a woman may become pregnant as a result of non-consensual sexual intercourse performed upon her by her husband."

"We would be remiss in not recognising that intimate partner violence is the reality and can take the form of rape. The misconception that strangers are exclusively or almost exclusively responsible for sex and gender based violence is a deeply regrettable one. Sex and gender based violence in all its form in the context of family has long formed a part of the lived experiences of women."

It was further highlighted by the bench that existing Indian laws already recognised various forms of familial violence.

While further elaborating upon the exception of marital rape in IPC and its effect on the MTP Act, the bench stated–

However, the bench clarified that including marital rape within the meaning of rape was solely to be done for the purpose of the MTP Act. The court stated–

"The meaning of rape must therefore be understood as including marital rape solely for the purpose of the MTP Act and any other rules and regulations framed thereunder. Any other interpretation would have the effect of compelling a woman to give birth to and raise a child with a partner who inflicts mental and physical harm upon her."

"It is not inconceivable that married women become pregnant as a result of their husbands having "raped" them. The nature of sexual violence and the contours of consent do not undergo a transformation when one decides to marry. The institution of marriage does not influence the answer to the question of whether a woman has consented to sexual relations. If the woman is in an abusive relationship, she may face great difficulty in accessing medical resources or consulting doctors"

The court also held that a woman need not prove the commission of rape or sexual assault to seek termination of pregnancy under the MTP Act. The bench opined–

"In order to avail the benefits of Rule 3(b)(a) the women may not necessarily seek recourse to formal legal proceedings to prove the factum of sexual assault or rape. Neither explanation 2 to Section 3(2), nor Rule 3(b)(a) requires the offender be convicted under the IPC or any other criminal law for the time being in force before the pregnant women can access an abortion. Further there is no requirement that the instance may be registered or the allegation of rape may be proved before a court of law or some other forum before it can be construed true for the purpose of the MTP Act. Such a requirement would be in conflict with the purpose of the MTP Act. In fact explanation 2, triggers the legal presumption as to mental trauma where any pregnancy is alleged by the pregnant woman to have been forced by rape."

It may be noted that the Supreme Court is at present considering petitions challenging the constitutionality of Exception to Section 375 of the Indian Penal Code, which exempts marital rape from the offence of rape.

A detailed report on the judgement can be read here.