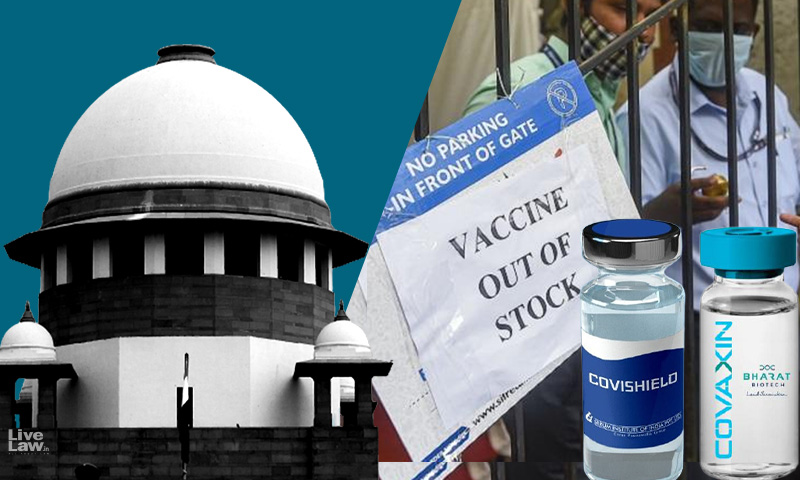 The Central Government has filed an affidavit in the Supreme Court saying that its vaccination policy was formulated based on widespread consultations with experts, state governments and vaccine manufacturers.The affidavit was filed in response to the prima facie observations made by the Supreme Court in its April 30 order that the Centre's vaccine policy was detrimental to right to health...

The Central Government has filed an affidavit in the Supreme Court saying that its vaccination policy was formulated based on widespread consultations with experts, state governments and vaccine manufacturers.

The affidavit was filed in response to the prima facie observations made by the Supreme Court in its April 30 order that the Centre's vaccine policy was detrimental to right to health and that the same should be revisited to conform with the mandate of Articles 14 and 21 of the Constitution.

The top court had questioned the rationale behind the differential pricing of vaccines for Centre, State Governments and private hospitals. A bench comprising Justices DY Chandrachud, L Nageswara Rao and S Ravindra Bhat had opined that it will be better if Centre procures the vaccines for all states, instead of asking the states to procure them from open market, competing with private players. The Court had also suggested that the Government should invoke powers under the Patents Act, such as compulsory licensing, to make COVID vaccines and drugs more affordable and accessible amid a public health emergency.

In response to the Court's observations and queries, the Centre has said that the distribution of the vaccine amongst the States is based on " equitable and rational criteria" and that it has persuaded the manufacturers to fix a uniform rate for states to avoid regional disparities. The Centre also said that allowing private entities to sell vaccines will ease the operational stress of government facilities providing free vaccination. Taking a stand against waiver of IP rights of COVID drugs and medicines, the Centre went to the extent of saying that any such discussions at this stage will be counter-productive.

Seeking to prevent judicial review over the policy, the Centre has told the Court that "any overzealous, though well-meaning judicial intervention may lead to unforeseen and unintended consequences".

LiveLaw reached out to certain experts for their analysis of Centre's stand.

'Not rational and equitable'

Professor R Ramakumar, Centre for Study of Developing Economies of Tata Institute of Social Sciences, said that the affidavit has brought to light a lesser known aspect of the Centre's vaccine policy - that it has capped the state's quota as 25%.

He pointed out that in the affidavit, the Centre reveals that the states can only procure the half of the open market pool of the vaccines, which means 25% of the vaccine production. The ratio of allocation thus means 50% for centre, 25% for states and 25% for private hospitals.

The affidavit states that:

Capping the quota of the states, which have the same constitutional obligation as the Centre to protect the health of citizens, and putting them on the same pedestal as private hospitals which operate with profit motive, does not reflect a rational or equitable policy, said Professor Ramakumar. This will force more people to pay for vaccines, which will undermine the aim of universal vaccination.

According to him, certain statements made in the affidavit are strong indicators that the policy has been devised in such a manner to ensure profit maximization for private players.

The affidavit also says that the price factor will not affect the ultimate beneficiary as all state governments have announced free of cost vaccinations. Thus, the burden of providing free vaccination has been passed on to states, which have to procure vaccines from manufacturers at a higher rate than the Centre. While vaccines are given to Centre at Rs 150 per dose, for states it is Rs 300 per dose for COVISHIELD and Rs 400 per dose for COVAXIN.

"How is this rational and equitable?", Professor Ramakumar asks.

Free-market pricing will not increase supply of vaccines

Mumbai-based advocate Murali Neelakantan,  who has been actively writing and commenting about the vaccination policy in leading dailies and public platforms, said that the justification given for the differential pricing is contrary to the Vaccine Policy, 2011 which clearly states that central procurement, multiple vendors and one price is the best procurement strategy. WHO and all its supported projects and every other country has now adopted this.

"There is no market price when there is a virtual monopoly, a duopoly at best with scarce product and limited capacity that cannot be immediately scaled up. Allowing free market pricing will not increase supply of vaccines in India when there are so many other barriers", he said.

He also pointed out that a plethora of economists and health finance experts, including former Union Health Secretary Sujatha Rao, Kaushik Basu, Arvind Panagriya and V Ananth Nageswaran have rubbished the pricing policy. There isn't one credible economist willing to support this.

Questioning the government's logic of private hospitals easing the pressure on government facilities, Mr.Neelakantan said that it reflected a "poor understanding of basic economics".

"Where there are multiple markets with multiple prices, supply will naturally go to where there is most profit. We are already seeing that vaccines are available for Rs2000 in some private hospitals but nothing is available in government hospitals", he said.

"The centre putting state governments in a situation where they have to beg private manufacturers for vaccines is shameful. The manufacturers can decide who to sell to and the result is that some Indians will be denied vaccines while others may get it. For example, poorer states will not be able to afford any vaccines and if there aren't any big hospital chains in those states, the people there will have scarcity of vaccines, depending entirely on the centre to allocate vaccines. The richer states will be able to get vaccines. They also have big hospital chains who are participating in the vaccination. Together the people in those states will have more vaccines more quickly than other states", he added.

'Centre's Vaccine Policy Prima Facie Detrimental To Right To Health, Centre Should Consider Revisiting It To Withstand The Scrutiny Of Articles 14,21': Supreme Court

Why no price control of COVID drugs?

Mr.Neelakantan noted that the Centre has evaded the issue of price control of COVID-19 drugs.

Dr Prabhash Ranjan, Senior Assistant Law Professor of South Asian University, opined that the Centre's stand against invoking powers under Patents Act over COVID drugs and vaccines was contrary to the position taken by India last year in WTO for waiver of TRIPS rights

"I find this inconsistent with what India has been arguing in the WTO. If you are arguing for suspending IP rights at the WTO, then the least that you should be doing is put use of the existing provisions in the Patent Act domestically. Compulsory licensing is an important provision. Domestically you are taking a position that we will not make use of compulsory licensing, and internationally you are arguing that IP rights should be waived. How do you reconcile these completely contradictory and conflicting stances?", Dr.Ranjan said.

He cautioned that this stand taken before the Supreme Court might weaken India's position at the WTO.

The Centre has said that additional licenses will not solve the problem as the main constraint is on availability of raw materials and inputs. Dr Ranjan expressed doubts over the tenability of this argument.

Dr.Ranjan and Professor Ramakumar also questioned the tenability of the Centre's submission that discussion on exercising statutory powers over COVID drugs and medicines at this stage will be counter-productive to India's diplomatic efforts to procure medicines and drugs from foreign nations.

How can this argument hold good for domestically produced COVAXIN, both of them asked.

Professor Ramakumar pointed out that Centre's affidavit made it clear that there is IPR sharing between ICMR and Bharat Biotech over COVAXIN, and that former is paid 5% royalty by the latter on net sales. So, why more manufacturers, especially those in the public sector, were not given licenses for COVAXIN, Prof.Ramakumar asked.

"Since there is shared ownership, there is no need for any statutory action by the government under the patents act. The government should be able to license this freely. There is nothing in the affidavit of May 09, 2021 explaining why this hasn't been done. This delay is resulting in thousands of avoidable deaths. In fact, it would strengthen the stand taken by India in the WTO if it offers free licensing and tech transfer for Covaxin", he said.

In this connection, it is pertinent to note that the Madras High Court had recently asked why public sector undertakings can't be revived to ramp up vaccine production.

Mr.Eashan Ghosh, Delhi-based IP lawyer and author of the book "Imperfect Recollections : The Indian Supreme Court on Trade Mark Law", said that the issue is not so much whether the Centre should take out compulsory licenses on Covid drugs now. "The issue is asking whether, if the Centre had taken out compulsory licenses on Covid drugs, say, six months ago, when it had exactly the same amount of information about their role in Covid treatment as it does now, would we be seeing tens of thousands of SOS messages a day and elaborate black market rackets hoarding these drugs now?", he said.

Ghosh commented that the Centre's affidavit reflected a position that is more concerned with preserving the Indian government's bargaining position with pharma companies abroad than fully addressing the crisis that faces domestic Covid drug manufacture.

He also highlighted the disguised hesitation in the Centre's affidavit to over-commit manufacturing resources to ensure supply of essential drugs like Remdesivir. The Centre says in it affidavit that "it is difficult to predict the trend of the pandemic and therefore difficult to forecast the demand of Remdesivir with a reasonable degree of certainty"(para 46).

"This comes across as especially tone deaf, considering that the failure of the Centre to make reads on future demand for medical resources (not just Covid drugs but ICU beds, medical oxygen, and so on) has landed us in the current position in the first place", Ghosh said.

He also said that the Indian Government telling the Supreme Court to not discuss IPR-waiver issue while arguing for TRIPS waiver in WTO was a "historically bizarre situation".