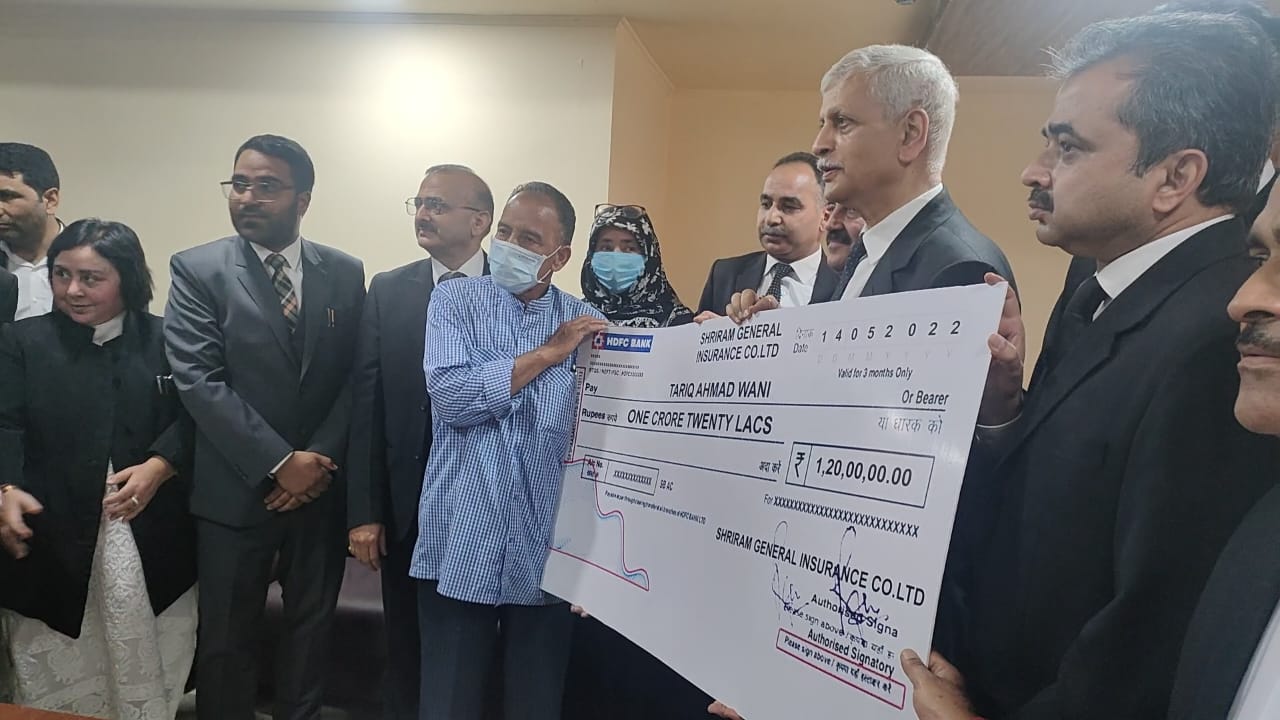 The Second National Lok Adalat (NLA) for current calendar year was held on 14th May 2022 by NALSA in 24 States/UTs across the country, under the aegis of National Legal Services Authority (NALSA) in both physical and virtual or hybrid mode.

Justice Lalit stressed need of quick and affordable access to common men so that he is encouraged to actively participate in the process.

During the session, Mr.Justice Lalit interacted with litigants, in particular to those who belong to poor and downtrodden strata. A large number of litigants have expressed their satisfaction for settling their disputes during the Lok Adalat. Justice U.U. Lalit handed over cheque of ₹ 1.2 crore to father of one of the victims of an accident who is in coma (unconsciousness) for last 4-5 years & struggling for survival.

Justice Lalit also handed over cheques of settlement amount to various other beneficiaries.

As per the figures received till 5.00 P.M, more than 56.82 lacs have been reported to be settled, which include 8.53 lacs pending and 48.29 lacs pre- litigation cases. The total value of the settlement amount is ₹ 2648.43 crore. These numbers are unprecedented compared to the earlier National Lok Adalats of 2021 and first NLA of 2022.

National Lok Adalats are held for at regular intervals i.e. once in 3 months, where on a single day Lok Adalat are held throughout the country, in all the courts till the Taluk Levels wherein pending and pre-litigation cases are taken up with objective to disposed of in conciliatory manner.

Due to summer vacations in some of the High Courts & the District Courts, the NLA have been either preponed or rescheduled. Maharashtra,

This year entire North India is reeling under a scorching heat wave, for which necessary arrangements for sheds like tents, water and other essentials were made by the Legal Services to ease the plight of common citizens. The endeavour of NALSA this year is to focus on promoting people friendly and people centric Legal Aid system.

NALSA along with other Legal Services Institutions conducts Lok Adalat at regular intervals for disposal of civil and criminal compoundable criminal cases either pending or at pre-litigation stage whether before any Court or tribunal. Lok Adalat is one of the alternative dispute redressal mechanisms, it is a forum where disputes/cases pending in the court of law or at pre-litigation stage are settled/ compromised amicably. Lok Adalat have been given statutory status under the Legal Services Authorities Act, 1987. Under the said Act, the award (decision) made by the Lok Adalats is deemed to be a decree of a civil court and is final and binding on all parties and no appeal against such an award lies before any court of law. There is no court fee payable when a matter is filed in a Lok Adalat. If a matter pending in the court of law is referred to the Lok Adalat and is settled subsequently, the court fee originally paid in the court on the complaints/petition is also refunded back to the parties.