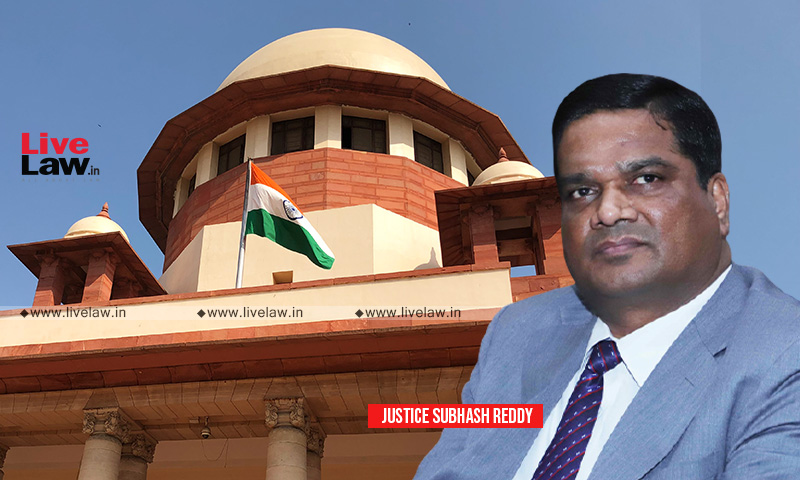 While highlighting the need to modernise the procedural laws for faster disposal of pending cases, Supreme Court Justice Subhash Reddy on Tuesday stated that having a further Court of Appeal above High Court, as suggested by the Attorney General of India earlier, may solve the issue of pendency of cases to some extent.However, Justice Reddy added that at the same time the huge backlog pendency...

While highlighting the need to modernise the procedural laws for faster disposal of pending cases, Supreme Court Justice Subhash Reddy on Tuesday stated that having a further Court of Appeal above High Court, as suggested by the Attorney General of India earlier, may solve the issue of pendency of cases to some extent.

However, Justice Reddy added that at the same time the huge backlog pendency in District Courts needs to be addressed.

" I remember very recently AG suggested a further court of appeal above High Court which can be final Court in ordinary civil and criminal matters by making suitable Constitutional amendments. According to me, the suggestion may solve the issue to some extent but at the same time we've to address issues to clear huge backlog pendency in District Courts." Justice Reddy said speaking at the farewell event organised for him by the Supreme Court Bar Association.

AG K. K. Venugopal had last year suggested that four benches of Court Of Appeal can be created with 15 Judges each sitting across the country to reduce the burden of the Supreme Court. According to the AG, the intermediate Court of Appeal will hear the matter finally and there would be no further appeal therefrom to the Supreme Court. The Suprem Court will thus only focus on matters of constitutional importance.

Today was the last working day of Justice R Subhash Reddy as a judge of the Supreme Court.

During his speech, Justice Reddy pointed out that all courts in our country have a huge backlog of pending cases. Every year this backlog swells in size due to increase in several kinds of litigation like motor accident claims, cheque bounce cases, domestic violence cases, etc. Though the infrastructure is developed to some extent, the Judiciary is not able to meet the aspirations of the litigant public.

Justice Reddy stated that the existing procedural laws are not designed to meet the challenges which courts are facing today. He added that the time consuming traditional procedures prescribed in 19th century for the trial of cases in a pre-industrial society require to be modernised to suit needs of a modern society

"Number of studies have shown positive benefits of a strong and effective judicial system. The Degree of Judicial independence is co-related to economic growth. Better performing courts have been shown to lead to more developed credit markets. A stronger Judiciary is associated with the growth of larger and small firms. Justice delivery system plays an important role in assessing the development of a nation", he said.

Justice Reddy further said, "Unless we come up with comprehensive planning giving timelines for disposal of cases, present system may not work for present and future needs. It's high time for all stakeholders to think seriously to bring drastic reforms keeping in mind the present day needs of the society."

Justice Reddy spoke about how the public contentment and confidence in the courts depend upon the efficiency of the Judiciary. He said that while the Judiciary enjoyed a great reputation for efficiency in first half of the century, there has been a gradual decline in efficiency and quality of justice.

He added that there has been rapid change in the values of life and morals and the need is replaced by greed. The deterioration in human values had its impact in rising cases and crimes.

Message to Young Members Of Bar: Addressing the young members of Bar during his farewell speech, Justice Reddy said that there is no other road to success for young lawyers except hard and honest work.

He said that the profession of law is a public profession, an Advocate once he accepts the brief is not only representing his client but is servant of public as well.

"Those who come into contact with you must be convinced that you are a gentleman, and his cause is safe in your hands. Your client has trusted you, don't give much importance to money, work with sincerity always look forward and wait for rosy days", Justice Reddy said.

Justice Reddy also requested all lawyers to cultivate habit to appear in atleast 5 cases of legal aid every year.

Speaking at Justice Reddy's farewell event, the Chief Justice of India NV Ramana said that throughout his tenure Justice Reddy protected people's rights through his judgements.

"I personally witnessed his analytical skills on Bench while deciding cases like Anuradha Bhasin, etc. He showed a resolute and committed attitude on administrative side also. He has a deep interest in history, philosophy, culture etc." CJI said

"Our values are the greatest wealth and we must never forget the same. Justice Reddy's journey will continue to inspire others. Parting is very emotional especially when we have known someone for 4 decades. Retirement is just like freedom regained, especially for a judge. He is free from all restrictions which come with office and can express his views on all issues." CJI added

Addressing the event, the Attorney General of India KK Venugopal stated that it is a travesty that Supreme Court judges should retire at the age of 65 and High Court judges retire at 62.

"Looking at our judges I can state with conviction that they will be able to perform their duties as Judge of Apex Court justly, fairly And with competence. When lawyers at 70-75 years have no difficulty in presenting their arguments, why shouldn't SC judges retire at 70 and HC Judges at 65 so with all their experience and expertise will be able to do credit to the Judicial system. It's time that the Higher Judiciary and Government of India put their heads together and fashion out a scheme for this purpose", AG said.