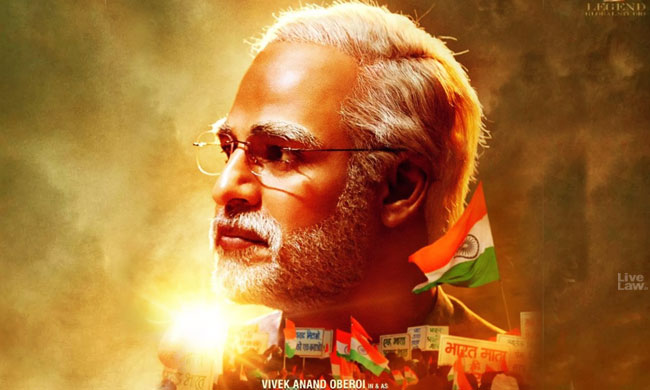 The Supreme Court on Friday backed the stand of the Election Commission in refusing to lift the stay on the release of the biopic on PM Narendra Modi until the conclusion of the Lok Sabha polls.

"We are not inclined to interfere", observed the bench headed by Chief Justice Ranjan Gogoi, dismissing a plea by the producers of the film starring actor Vivek Oberoi in the titular role.

The biopic on Prime Minister Narendra Modi is a "hagiography", which treats the subject with undue reverence, and its public screening during poll campaign will "tilt the electoral balance", the Election Commission (EC) has told the Supreme Court while opposing the release of the movie before the polls end on May 19.

In its 20-page report submitted to the apex court bench headed by Chief Justice Ranjan Gogoi on the film titled 'PM Narendra Modi', the poll panel said that the biopic "produces a political environment where an individual acquired cult status" and its public screening during the period when model code of conduct is in operation would favour a particular political party.

The EC said "there are several scenes depicting a major opposition party as corrupt and showing them in poor light. Their leaders have been depicted in such a manner that their identification is clear and obvious to the viewers."

It said that the biopic was more than a biography and was a "hagiography" (which treats the subject as saints and gives undue reverence) and the construct of the movie was "unabashedly uni-dimensional", which puts an individual on a higher pedestal through use of specific symbols, slogans and scenes.

The report was submitted after the apex court had on April 15 directed the EC to re-examine its earlier order and take an informed decision on banning pan-India the release of the biopic after watching the full movie.

The court had asked the poll panel to provide its report to the producer of the movie.

The report further said, "Eulogising of the character Narendra Modi is very clear right through the movie. More than biography, it is hagiography."

It also said that the biopic "produces a political environment where an individual acquired cult status. The construct of this 135-minute movie is unabashedly uni-dimensional, which puts an individual on a higher pedestal through use of specific symbols, slogans and scenes. It ends up eulogising an individual, giving him a saintly status".

Senior advocate Mukul Rohatgi, appearing for film producers who have challenged the EC's ban on the biopic's release till the current general elections are over, had earlier told the top court that the poll panel has taken the decision after watching a two-minute promo, and not the entire movie.

EC's counsel Amit Sharma had said that the entire movie was not available and a decision to ban the release was taken after watching the trailer.

The bench had then asked the poll panel to watch the full movie and then take an informed decision on whether its release should be banned or not.

The EC had on April 10 stalled the release of the film until the polls end, asserting that any biopic material with the potential to disturb the level-playing field during elections should not be displayed.

The commission, in a separate order, had also directed the producers "not to exhibit the film titled 'PM Narendra Modi' till further orders". The film was earlier set to release on April 11.

Acting on the complaints of political parties, including the Congress, the poll panel had also said that any poster or publicity material concerning any such certified content, which either depicts a candidate (including prospective) for the furtherance (or purported to further) of electoral prospects, directly or indirectly, shall not be put on display in electronic media in the area where MCC is in force.

The Left had also opposed the release of the film, saying it would disturb the level-playing field for other parties in the election and was in violation of the Model Code of Conduct.

The Modi biopic, starring Vivek Oberoi, has been the most-talked about movie this election season. Directed by Omung Kumar, it tells the story of Modi's rise to power from his humble beginnings.

The apex court had on April 9 dismissed a petition filed by Congress leader Aman Panwar for a stay on the release of the biopic, saying the Election Commission would be an "appropriate" place to seek the redressal.

The apex court had said it was not entertaining the petition for the stay on the release of the film which would be "premature" in view of the fact that the movie is yet to be certified by the Censor Board.

It said even if the film is released on April 11, as claimed by the Congress leader, it will be appropriate for him to seek a redressal from the Election Commission.