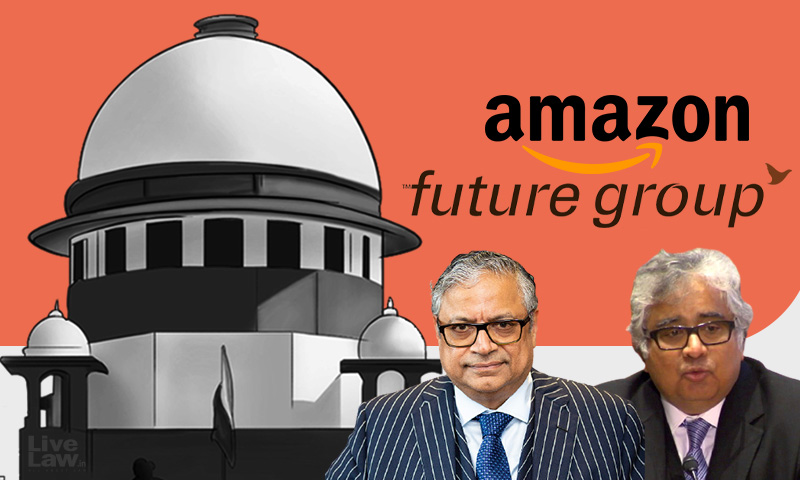 "We've been saying from day one that Amazon is driving us to our knees, they have done it, we're broke. We've no money to fight it." lawyer for Future Retail on Tuesday submitted before the Supreme Court.Senior Advocate Harish Salve appearing for Future Retail Limited made the submission before a Bench comprising the Chief Justice of India NV Ramana, Justice AS Bopanna and Justice...

"We've been saying from day one that Amazon is driving us to our knees, they have done it, we're broke. We've no money to fight it." lawyer for Future Retail on Tuesday submitted before the Supreme Court.

Senior Advocate Harish Salve appearing for Future Retail Limited made the submission before a Bench comprising the Chief Justice of India NV Ramana, Justice AS Bopanna and Justice Hima Kohli.

The submission came in response to the contention put forth on behalf of e-commerce giant Amazon that Future Retail is handing over its assets and stores to Reliance in violation of orders of the Arbitral Tribunal and the assurances made by it before the Apex Court.

Senior Advocate Salve submitted that no assets have been transferred and the stores have been taken over by Reliance.

He added that Future Group has time and again told all the forums that if the injunction is not withdrawn and its deal with Reliance doesn't go through, the Future Group will have no money.

"A large amount is today owed to Reliance, we have no money to put down. We can talk about the glory and grandeur of things, but when we're broke we're broke. That is the hard reality. We have been strangulating, because of all these injunctions and the scheme not going through", Mr Salve said.

With regard to the transfer of assets, Mr Salve submitted that Future Group has been unable to pay the rent for over 2 years, and the landlords are therefore terminating its leases.

"We had no money to pay them, which is what we've been telling all forums. Reliance signed up with the landlords. We were continuing on leave license for year and a half, over 2000 crores were due as leave license fee to Reliance, we were in no situation to pay that. They have terminated it, they've walked in, quite a number of stores they have taken it. Today even if we go to a court they will say pay the money upfront." Mr Salve said

Senior Advocate Mukul Rohatgi appearing for Future Coupons Limited while supporting Mr Salve's submission also submitted that, "The shops are there! What's the point of saying it's been taken over. He can't orally talk about it, he can file a petition and we will reply.

"The Shop takeover started 15 days ago. We've no control, if Reliance is acting outside this litigation. Reliance is taking over, we can't do anything. What do we do? We haven't signed anywhere. In fact Mr Biyani went and protested." Mr Salve said.

In the Future- Amazon dispute, the lawyers on behalf of the American e-commerce giant Amazon had on last occasion proposed to have an informal dialogue with the Future Group to settle the dispute amicably. The Supreme Court had therefore adjourned the matter.

Today, at the outset, Senior Advocate Gopal Subramanium for Amazon informed the Court that the dispute could not be resolved through discussion.

Mr Subramanium however submitted that another development of concern has taken place in the case. He added that since the proceedings have been going on before the Supreme Court, it has always been submitted by the Future Group that they should be allowed to go on with the NCLT proceedings and no prejudice will be caused to Amazon. However, contrary to those submissions, even when proceedings are pending before different forums the FRL shops have been taken over by Reliance. Further, not only has Reliance taken over, it has also come in public disclosure.

"When an order was passed by Emergency Arbitrator, Reliance had made a filing with stock exchange to say that they will enforce their obligations as far as future group is concerned", he said

Mr Subramanium further submitted that they want the arbitration to resume.

Responding to Mr Subramanium's submissions, the Bench observed that some orders will have to be passed by the court. The Bench further opined that it has been very lenient in the present matter by granting adjournments.

Senior Advocate Subramanium submitted that he doesn't don't want a message to go that orders of court can be happily flouted.

"It is one of greatest democracy. The Highest court is told that no assets will be transferred, its been recorded, let NCLT carry on and during pendency the orders have been flouted. They have terminate leases with the old landlords, and Reliance is taking over the stores." Mr Subramanium said.

"Last time we said that agree for a early hearing before the High Court. Proceedings are going on and all this is happening.We're getting a feeling that by adjourning matter, we're being lenient", CJI said

"The Tribunal has now said that they have dates available, Your court had said let them hear my strike out petition. We can go to the Tribunal and they can take it forward." Mr Salve said

Calling it a welcome development, Mr Subramanium agreed with the Court's suggestion that the parties may go back to the Arbitral Tribunal and submitted that he is not standing in way of their termination application.

Senior Advocate Aspi Chinoy appearing for Amazon argued that 'if 80% of the shops are all surrendered to Reliance then what is left in the arbitration?

"So suddenly they are saying there's no money so the shops are taken over? Look at the conduct. Is this the appropriate behaviour?", Chinoy asked.

"Not one store has been surrendered. Reliance removed the boards as they're entitled to under local law. All our assets are where they are. There was a leave of license which has been forfeited I've been saying this litigation will drive us to bankruptcy, and it has", Mr Salve said

The Bench granted Amazon liberty to file an IA with regard to the reliefs being sought by way of an interim order. The matter will be taken up on 16th March (tomorrow)

According to Amazon, FRL and its promoters made false submissions before the Supreme Court stating that the retail assets would continue to vest in FRL until the scheme of arrangement with Reliance was finally approved by the NCLT.

'These false statements were made knowingly as FRL was on the verge of purportedly allowing handing over of the retail assets to the MDA Group.' the public notice issued by Amazon states

The notice has warned parties who assist or cooperate with FRL in transferring, disposing, or alienating its assets, of civil and criminal consequences under law.

The public notice has stated that any attempt by Future Retail Ltd and its promoters transfer/dispose/alienate any of its retail assets is in violation of binding orders of the Arbitral Tribunal, and party assisting or cooperating in such actions will be liable for civil and criminal consequences under law.

The impunged order of the division bench also stayed the Single Judge order which had dismissed Future Group's plea challenging the two orders passed by the Singapore Arbitration Tribunal which deferred the hearing in Future's plea seeking termination of the arbitration proceedings instituted by Amazon.

The High Court had also issued notice on the two appeals filed by Future Retail Ltd. and Future Coupons Pvt. Ltd. impugning the said Single Judge order and made it returnable on February 1, 2022.

Before the High Court, Future Group in its plea had placed reliance on an order passed by the Competition Commission of India on December 17, 2021, which had kept the approval granted for Amazon's deal with Future Group in abeyance.

Before the Supreme Court, Amazon has argued that the impugned interim order injuncting an ongoing international commercial arbitration seated in New Delhi under SIAC Rules presided over by a distinguished Arbitral Tribunal and involving parties and experts from across the world is strikingly contrary to the provisions, intent and purpose of the Arbitration and Conciliation Act which emphasises party autonomy and minimum judicial interference.