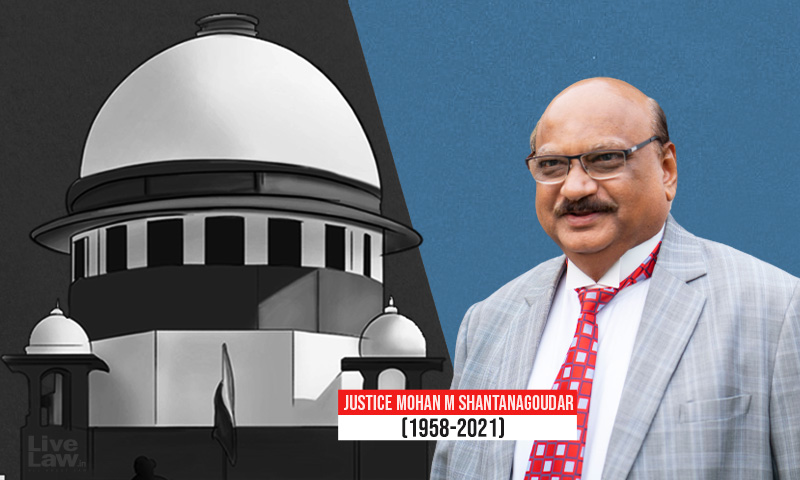 Supreme Court judge Justice Mohan Mallikarajanagouda Shantanagoudar passed away on April 24, at the age of 62 years.

Justice Shantanagoudar has left his mark left through several notable judgments delivered during his term at the Supreme Court.

Within one year of becoming a Supreme Court judge, Justice Shantanagoudar made his presence felt with his dissent in the Indore Development Authority case, which dealt with Section 24 of the new land acquisition law.  Pointing out the impropriety of the bench overruling a precedent laid down by a coordinate bench, Justice Shantanagoudar dissented from the majority of Justices Arun Mishra and AK Goel, and reminded that the proper course would be to refer the matter to a larger bench. It may be noted that the matter got ultimately referred to a larger bench.

Justice Shantanagoudar was prolific in authoring judgments and has settled several substantial questions of law.

Here is a quick glance at some of the noteworthy judgments of Justice Shantanagoudar, as we mourn his worldly departure.

In a recently delivered judgment, Justice Shantanagoudar-led bench issued a slew of guidelines for ensuring safe custody of valuables in bank lockers in the case Amitabha Dasgupta vs. United Bank of India. It was emphasized that the banks owe a separate duty of care to exercise due diligence in maintaining and operating their locker or safety deposit systems

In a judgment having the effect of encouraging private settlement of disputes, Justice Shantanagoudar-led bench recently held that parties who settle their cases through private mediation, outside the modes contemplated under Section 89 of the Civil Procedure Code, are also entitled to get refund of court fees(High Court of Judicature at Madras vs. M.C. Subramaniam).

Justice Shantanagoudar's judgment gave a purposive interpretation to the provisions, and rejected the narrow interpretation which had the effect of creating two classes of parties.

The judgment authored by Justice Shantanagoudar(while being part of a bench led by Justice UU Lalit and including Justice Vineet Saran) which held that the magistrates have the obligation to inform an accused of his right to avail default bail when it accrues is significant for its concern shown for personal liberty. The judgment also held that subsequent filing of chargesheet or application seeking extension of time will not defeat the right to seek default bail, once it has accrued (M Ravindran v Intelligence Officer).

In another judgment, Justice Shantanagoudar observed that Magistrates and Trial Courts also have the responsibility of safeguarding the fundamental rights of citizens as the "first lines of defence for both the integrity of the criminal justice system"

Justice Shantanagoudar had authored the landmark judgment which held that a farmer was entitled to file a consumer Complaint against a seed company for deficiency of service in the case M/s Nandan Biomatrix Ltd v S Ambika Devi.

The judgment held that farmer's buying of seed cannot be held as a commercial purpose. He also made certain pertinent remarks regarding the hardships faced by farmers and the tendency of big corporates to exploit them.

"...we feel constrained to note that the Indian agricultural scenario, today, is in a very imperilled state. Agriculturists have to deal with serious environmental concerns like topsoil depletion, contamination of food, water and soil due to toxic fertilizers and pesticides, and the vagaries of the weather, which are becoming more and more severe and unpredictable as the climate deteriorates.

Practices such as crop diversification and rotation, which are crucial to species diversity and thus to maintain soil health and ensure farm security, and are in-built in traditional forms of farming, are under threat from the increasing inroads being made into the Indian farm by corporates of all sizes, which come with the promise of increased yields and attractive returns. This is true with regard to the sale of seeds as well, even though Indian law protects plant material including seeds from patentability"

"Most Indian farmers own only small landholdings, which require expensive inputs such as irrigation, electricity, seeds, fertilizer, and pesticide, but do not generate sufficient output to cover the costs of the same. Though the sway of seed companies over small farmers in India is, as of now, minimal, when agriculturists with such small landholdings do enter into agreements to grow crops on terms dictated by seed companies, it is in the hope of earning some profit that would offset the cost of their inputs and generate some income for the household. Often, the crops require the intensive usage of labour and mechanization. Therefore, agreements such as the one in the instant case often guarantee technical and financial assistance to the farmer in order to be able to discharge his end of the deal. Needless to say, the success or failure of the crop would make or break the income of the farmer for the entire season. This can result in situations where small and medium scale farmers find themselves trapped in contracts where they buy expensive seeds which turn out to be defective, resulting in a failed season and severe financial hardship. The problem of indebtedness further worsens the plight of the farmer, and, all too often, manifests in the tragedy of suicide. Farmer suicides are indeed a systemic issue that has persisted, and perhaps worsened, over the last few decades", Justice Shantanagoudar said in the judgment.

In yet another judgment evoking concerns for personal liberty, Justice Shantanagoudar-led bench ruled that courts must not punish an accused if he has no legal representation.

The judgment held that when an accused is unrepresented before a Court, it has to either appoint an Amicus curiae or to refer the matter to the Legal Services Committee requesting it to appoint an advocate(Case : Shaik Mukhtar v State of Andhra Pradesh).

Justice Shantanagoudar's judgment in Taj Mahal Hotel vs. United India Insurance Company Ltd, shows his propensity to adopt that statutory interpretation which will favour an individual who is pitted against a big and powerful institution. Similar approach was evident in the case of farmer against the seed company.

In this case, it was held that in a case of theft of a vehicle given for valet parking, the hotel cannot claim exemption from liability by contending that it was due to acts of third parties beyond their control, or that they are protected by an 'owner's risk' clause.

"...the hotel-owner cannot contract out of liability for its negligence or that of its servants in respect of a vehicle of its guest in any circumstance. Once possession of the vehicle is handed to the hotel staff or valet, there is an implied contractual obligation to return the vehicle in a safe condition upon the direction of the owner", he observed in the judgment.

Hospitals have duty to provide hostel facilities to nurses

Another judgment of Justice Shantanagoudar safeguarding an individual's rights in an establishment is Lilavati Kirtilal Mehta Medical Trust vs. M/S Unique Shanti Developers, which held that the provision of hostel facilities to nurses so as to facilitate better medical care is a positive duty enjoined upon the hospital.

The Court also made some observations regarding the importance of nurses and the duty of hospitals to provide them hostel facilities. It said:

Nurses help in the speedy recovery of patients and are a vital resource for hospitals and medical centres inasmuch as they are the only resource available 24/7 for catering to patients' needs. They are directly involved in all aspects of hospital service quality, be it in the form of monitoring patients' recovery, bedside medication management or assistance with surgeries and other major operations. In some situations they are responsible for performing immediate interventions to prevent medical complications. They are on the frontlines of administering and evaluating treatment, and provide invaluable emotional support as they are best placed to understand the complexities and implications of having a serious illness. Hence the provision of hostel facilities to nurses so as to facilitate better medical care is a positive duty enjoined upon the hospital so as to maintain the beneficial effects of the curative care efforts undertaken by it. Such a duty exists irrespective of the surplus or turnover generated by the hospital, and hence is not even remotely related to the object of earning profits or for any commercial use as envisaged under Section 2(1)(d).

A bench headed by Justice Shantanagoudar allowed a habeas corpus petition filed by a man seeking the release of his lover who was detained in a Nari Niketan in Uttar Pradesh against her wishes.

Having regard to the fact that she was a major, the bench directed her release, observing that she was free to live as per her wish.

References made to larger bench

Justice Shantanagoudar was part of benches which referred to larger bench important legal issues such as :

Justice Mohan Shantanagoudar was someone who strongly advocated for preserving the rich diversity of our country, and underlined the need to promote inclusivity and empathy and to fight bigotry and hatred. He was a proponent of rationality and critical thinking.

These attitudes of Justice Shantanagoudar became evident in a speech given by him during a convocation ceremony of NUALS Kochi in 2019.

"The current global political climate is governed by fear and hatred of the Other. The "Other" is anyone who is not the same as oneself on any perceived marker of identity such as nationality, religion, caste, ethnicity, skin colour, language, sex or gender, and so on", he said.

"Those who seek political mileage find it very easy to promote violence and unrest and divide the population by exploiting people's fear of being attacked and of being deprived of what is rightfully theirs. In a country as diverse as ours, naturally, there may exist many fault-lines which threaten to split our people apart, such as religious discord, casteism, regionalism, sexism and patriarchy, and so on and so forth", he added.

Highlighting the need to root for rationality and critical thinking to fight divisive ideas, he said.

"To be able to fight the divisive ideas being aggressively propagated nowadays, first of all, one needs to be firmly rooted in rationality and critical thinking, of which the cardinal rule is to never accept any idea or proposition at face value, but to determine its validity by critiquing and questioning it. Equally important, however, is a sense of inclusivity and empathy. It would do us all well to remember that what makes our country truly great is its beautiful composite culture, which is founded upon the principles of inclusion and integration. To go against these ideals is to destroy the very fabric out of which the rich tapestry of our nation is built"

The untimely demise of Justice Mohan Shantanagoudar is a great loss to the judiciary.

Team LiveLaw pays homage to Justice Mohan Shantangoudar and joins his family in their grief.