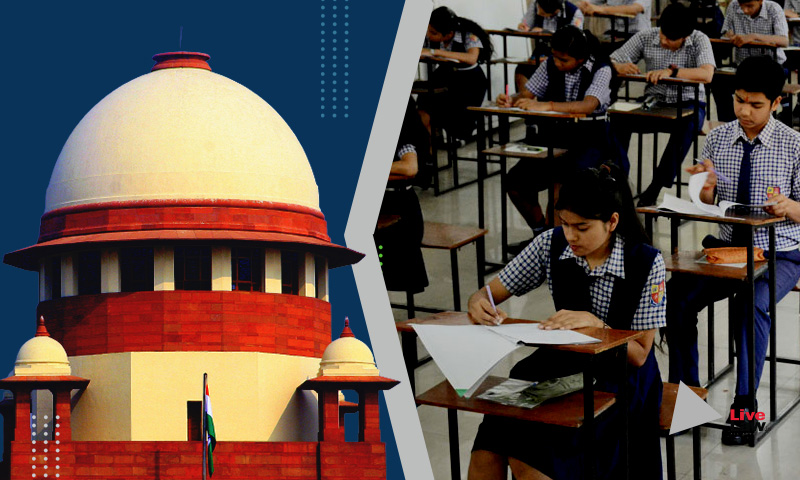 The Supreme Court on Monday refused to entertain a writ petition seeking directions to Centre and States to take a speedy decision regarding re-opening the schools to enable students to attend physical classes with adequate safeguards.The bench of Justices D. Y. Chandrachud and B. V. Nagarathna orally remarked that the petitioner-school student may pursue his remedies with the...

The Supreme Court on Monday refused to entertain a writ petition seeking directions to Centre and States to take a speedy decision regarding re-opening the schools to enable students to attend physical classes with adequate safeguards.

The bench of Justices D. Y. Chandrachud and B. V. Nagarathna orally remarked that the petitioner-school student may pursue his remedies with the government of the state, being the Delhi government, where he is based.

"Ask your client to focus on studies in school and not involve himself in seeking constitutional remedies. See how misplaced this petition is. I am not saying it is a publicity gimmick but this is why children must not involve themselves in all this. Imagine the situation in Kerala, in Maharashtra. Whatever happens in Delhi, is the situation same in, say, West Bengal or Punjab?", observed Justice Chandrachud at the outset.

The judge then pointed out the relevant provisions of the constitution to the advocate- "Look at the constitutional scheme. Entry 25 of list 3 deals with education- it reads 'Education, including technical education, medical education and universities, subject to the provisions of entries 63, 64, 65 and 66 of List I; vocational and technical training of labour'. Entry 63 of list 1 is 'institutions of national importance', 64 is 'Institutions for scientific or technical education financed by the Government of India wholly or in part and declared by Parliament by law to be institutions of national importance', 65 is 'Union agencies and institutions for professional, vocational or technical training, including the training of police officers; or the promotion of special studies or research; or scientific or technical assistance in the investigation or detection of crime' and 66 is 'Co-ordination and determination of standards in institutions for higher education or research and scientific and technical institutions'"

"After Article 21A has been brought into force, it has obligated the State to provide free and compulsory education to all children between the ages of 6 to 14 in such manner as the State may determine. The governments are ultimately answerable! They are also conscious of the need for children to gradually go back to school! We cannot, by judicial diktat, say that you shall send your children back to school, oblivious of the danger which may be there. We have just about come out of the second wave. You still have the danger of a possible spike...I am not saying it will necessarily happen or that it will be devastating. Fortunately, we have reports which say it may not be of such nature...Vaccination is taking place...I don't think these are the kinds of relief where the court should issue general directions that send all children to school!", reflected Justice Chandrachud.

Continuing, the Judge noted, "The complexities of governance immediately make this a matter where the court should not start issuing directions. In Karnataka, a decision has been taken to open schools and a petition is pending. The Delhi government has also taken a decision. So schools are being opened...let us leave something for the democratic way of life that the country has adopted! Let us leave it to the state governments! Surely, they want their children to go back to the school. That is one of the most fundamental duties of the local authorities across the country. Let the states find out where the spike is taking place, which are those areas within the state- there maybe states with 75 districts, 52 districts, states with high density of population in some districts and other districts with less density- these are matters which we should leave to the government to decide", added the judge.
"There has to be balancing of the interests of children who are home, how they are being affected physically, psychologically, mentally, with the dangers which may be posed to them if they are to mix with each other in a school environment. Can we divorce this issue from the vaccination issue? The government has taken the decision to vaccinate the children. All this also depends upon the nature of vaccination which the government will bring about for children. Our governments have taken a decision to have a phased reopening of school at the board level- for the 9th standard, 10th standard, 11 standard, 12th standard. We can't pick up children in the first standard and combine with them with these children who are making their foray into higher education", continued Justice Chandrachud.
"This issue is fraught with grave complexities. We cannot give judicial mandate in a petition where we don't have data. A child has filed this petition with an omnibus statement that children need to go to school. Of course, children need to go to school. But this is a sensitive issue of social policy- Children are to be vaccinated, also relevant are the available means of vaccinating children, teachers have to be vaccinated. You may withdraw this and pursue your remedies with the Delhi government. Let us not enter into a fraught area", said the judge.
"The government itself has to tread with extreme care when the issue is of exposing the younger children to the dangers of COVID-19. So the court must be equally or even more careful because there is absence of data before us, absence of scientific knowledge on our part and also on the part of the petitioner who has moved the court. The petition is not based on any scientific assessment. We have seen what has happened across the world where there was opening up of schools at an early stage! We know what happened in various countries though we need not mention their names but we read the newspapers!. We can allow you to withdraw the petition", remarked Justice Chandrachud.
Following the adverse remarks by the bench, the petitioner's counsel sought permission to withdraw the petition. Accordingly, the petition was dismissed as withdrawn.