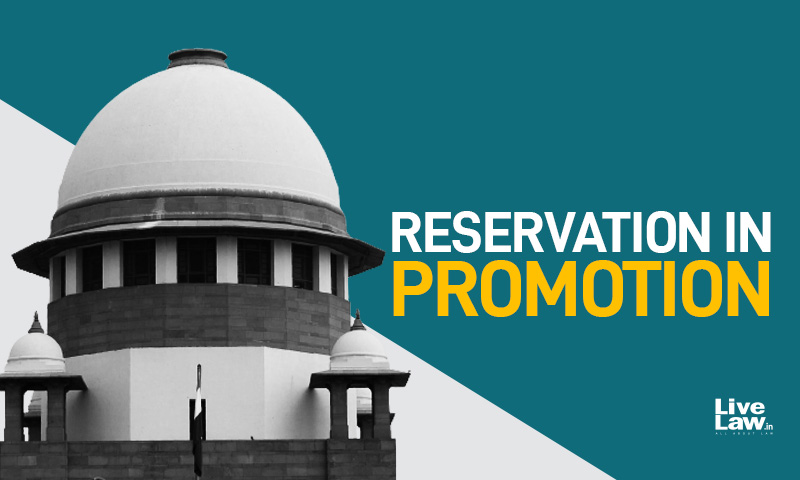 The Supreme Court on Tuesday told the Attorney General for India that the Centre will have to place figures and data would have to be placed before the Court showing that decision to continue with reservation in promotion was based on quantifiable data on adequacy of representation.A bench compriisng Justices L Nageswara Rao, Sanjiv Khanna and B.R.Gavai is hearing a number of...

The Supreme Court on Tuesday told the Attorney General for India that the Centre will have to place figures and data would have to be placed before the Court showing that decision to continue with reservation in promotion was based on quantifiable data on adequacy of representation.

Centre and States had urged the Supreme Court to settle the confusion regarding the norms for reservation in promotions. In the previous hearing the Bench led by Justice L.Nageswara Rao had made it clear that it will not reopen the law given in M.Nagaraj vs Union of India and Jarnail Singh vs Lacchmi Narain Gupta.

The Bench on Tuesday heard the Attorney General for India K.K.Venugopal who led his submissions by recalling the various judgements on the given issue of reservation in promotions- Indra Sawhney, R.K.Sabharwal, M.Nagraj and Jarnail Singh.

The  AGI opined that the issues that arose for the Court's consideration in the current batch of pleas were 1) Yardstick to be adopted to arrive at quantifiable data for adequate representation, 2) whether cadre should be taken as a unit, 3) The determination of criteria of 'efficiency' of administration and 4) whether the various directions issued by the Court would operate prospectively or retrospectively.

On the question of the yardstick to be adopted to arrive as quantifiable data for adequacy of reservation in public employment, AGI submitted according to R.K.Sabharwal vs State of Punjab, 1995 AIR 1371 the correct basis would be in proportion to the population. He specifically relied on the following para of the R.K.Sabharwal case:


"The percentage of reservation is the desired representation of the Backward Classes in the State services and is consistent with the demographic estimate based on the proportion worked out in relation to their populations."

He submitted that the difficultly lies in choosing the yardstick to determine adequacy. "Perhaps any yardstick will result in arbitrariness" he submitted.

He also pressed upon the Bench that there maybe some posts, keeping in mind the requirements of the job, which may have to be kept beyond reservation. He relied on following observations made in Jarnail Singh vs Lacchmi Narain Gupta to back his submission.

" According to us, Nagaraj (supra) has wisely left the test for determining adequacy of representation in promotional posts to the States for the simple reason that as the post gets higher, it may be necessary, even if a proportionality test to the population as a whole is taken into account, to reduce the number of Scheduled Castes and Scheduled Tribes in promotional posts, as one goes upwards.

This is for the simple reason that efficiency of administration has to be looked at every time promotions are made. As has been pointed out by B.P. Jeevan Reddy, J.'s judgment in Indra Sawhney (1) (supra), there may be certain posts right at the top, where reservation is impermissible altogether. For this reason, we make it clear that Article 16(4-A) has been couched in language which would leave it to the States to determine adequate representation depending upon the promotional post that is in question."

Further, AGI made reliance on B.K. Pavitra vs Union of India, to argue that the specific modalities of the quantum of reservation in promotion were a matter of policy. Averring to the following paragraphs:

"Once an opinion has been formed by the State government on the basis of the report submitted by an expert committee which collected, collated and analysed relevant data, it is impossible for the Court to hold that the compelling reasons which Nagaraj requires the State to demonstrate have not been established. Even if there were to be some errors in data collection, that will not justify the invalidation of a law which the competent legislature was within its power to enact. After the decision in B K Pavitra I, the Ratna Prabha Committee was correctly appointed to carry out the required exercise. Once that exercise has been carried out, the Court must be circumspect in exercising the power of judicial review to re-evaluate the factual material on record."

AGI further made reliance on the Supreme Court's judgement in Mukesh Kumar vs Uttarakhand. Averring to the following paragraph, the AGI submitted that providing reservation in promotion is a matter of policy and the satisfaction required is the subjective satisfaction of the government.

" It is for the State Government to decide whether reservations are required in the matter of appointment and promotions to public posts. The language in clauses (4) and (4-A) of Article 16 is clear, according to which, the inadequacy of representation is a matter within the subjective satisfaction 11 M. Nagaraj (supra) 14 | P a g e of the State. The State can form its own opinion on the basis of the material it has in its possession already or it may gather such material through a Commission/Committee, person or authority. All that is required is that there must be some material on the basis of which the opinion is formed. The Court should show due deference to the opinion of the State which does not, however, mean that the opinion formed is beyond judicial scrutiny altogether. The scope and reach of judicial scrutiny in matters within the subjective satisfaction of the executive are extensively stated in Barium Chemicals v. Company Law Board, which need not be reiterated."


"If the subjective satisfaction is tainted by illegalities then it maybe subject to judicial review": AGI submitted.

On the question of retrospective application of the law laid down in M.Nagraj and Jarnail Singh, the AGI submitted that retrospective application would disturb the promotions made prior to Art.16 4A and the judgements upholding their validity coming into force. He pressed that in certain cases some of the persons had retired too and the benefit they're entitled to would be affected.

He argued that some High Courts had blindly applied the law given in M.Nagraj and struck down Office Memorandum's issued prior to 1997 without taking into consideration that there was no requirement to take account quantifiable data prior to Nagraj case.

Averring specifically to the Delhi High Court's judgement in All India Equality Forum v Union of India, he argued that number of judgements have followed the law laid down in Nagraj and struck down Memorandums issued in the pre-Nagraj era.

Upon this the Bench enquired what the Centre had done after 2006 when the Nagraj Case laid down that reservation in promotion must be on the basis of quantifiable data. The Bench enquired as to when the Centre stopped making promotions on the basis of the 1997 Office Memorandum as that date could be taken as the cut-off date for the present matter and promotions made before the date could be protected.

Justice Khanna quipped that when Nagraj had explained how reservations are to be made then the 1997 Office Memorandum required to be modified.

The Bench further enquired if any exercise to gather quantifiable data and adequacy of representation had been made following the principle laid down in Sabharwal.

"Whether decision taken to continue with reservation in promotion is based on quantifiable data or not? We are not getting into details of formula followed at this point": the Bench observed.

The Bench observed that the main question before the Court was whether reservation in promotion has been done on the basis of quantifiable data on the adequacy of representation. The modality to be followed to determine quantum of reservation would be taken up later. The Bench further stressed that figures and data would have to be placed before the Court averring that decision to continue with reservation in promotion was based on data on adequacy of representation.

The Bench is to continue with the hearing tomorrow with the AGI concluding his submissions.

In 2006 in M.Nagaraj vs Union of India, a Constitution Bench of the Supreme Court had upheld the constitutional validity of the 85th Constitutional Amendments Acts providing for reservation in promotion. The Apex Court in Nagaraj had laid down conditionalities such as collection of data on the inadequacy of representation, the overall effect on the efficiency on administration and removing creamy layers while considering reservations in promotions.

In 2018, a 5-judge Bench in Jarnail Singh answered the reference holding the the 2006 judgment in M. Nagaraj v. Union of India case to be wrong to the extent it had stated that quantifiable data showing backwardness of SC/STs was necessary for giving them reservation in promotions. With this clarification, the 5-judge bench turned down the plea to refer Nagaraj decision to a 7-judge bench.