Restrictions In Kashmir Are Necessary To Prevent Terrorism : Attorney General 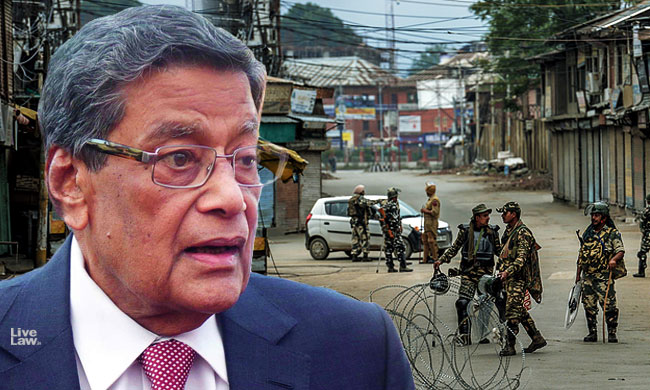 Attorney General K K Venugopal told the Supreme Court on Thursday that the restrictions in Kashmir were necessary to prevent cross-border terrorism and untoward incidents.

Past events such as public protest in the wake of killing of terrorist Burhan Wani in 2016 justified the present measures, submitted the AG.

"When Burhan Wani was killed, there was a lockdown for 3 months. If we see the past record of terrorist attacks, it would have been foolish to not take such action as a preventive measure", the AG told the bench comprising Justices N V Ramana, Subhash Reddy and B R Gavai.

Subversive elements cause the gathering of people with the "push of one button on the phone". The congregation of these elements is facilitated by internet.

"Are we to keep quiet? Was it not appropriate for Govt not to anticipate law and order problem? We cannot allow separatists and terrorists to operate", AG said.

The AG cited the SC decision in NIA v Zahoor Watali, where the Special Court had found links between militants, Hurriyat leaders and stone-pelters.  If there was no communication blockade, thousands of messages would have been sent to coordinate militants, said the top law officer.

The Court was hearing the petitions filed by Anuradha Bhasin (Executive Editor, Kashmir Times), Congress MP Ghulam Nabi Azad etc., challenging the communication blockade, internet shut down and other restrictions imposed in the region in the wake of abrogation of the special status of Jammu and Kashmir.

The AG added that the Government of India should be congratulated for handling the situation "without a single life lost and single bullet fired".

"Do not look at the nitty gritty of Section 144 of Code of Criminal Procedure. Look at the broader picture".

Earlier in the day, the Court heard the petitioners and also the Solicitor General for J&K administration. The hearing will continue on Monday.