The Supreme Court will tomorrow pronounce its judgment in a batch of appeals raising an important legal issue whether the Hindu Succession (Amendment) Act, 2005, which gave equal right to daughters in ancestral property, has a retrospective effect.These cases are listed before the three judge bench headed by Justice Arun Mishra for pronouncement of Judgment. BackgroundThese cases were...

The Supreme Court will tomorrow pronounce its judgment in a batch of appeals raising an important legal issue whether the Hindu Succession (Amendment) Act, 2005, which gave equal right to daughters in ancestral property, has a retrospective effect.

These cases are listed before the three judge bench headed by Justice Arun Mishra for pronouncement of Judgment. 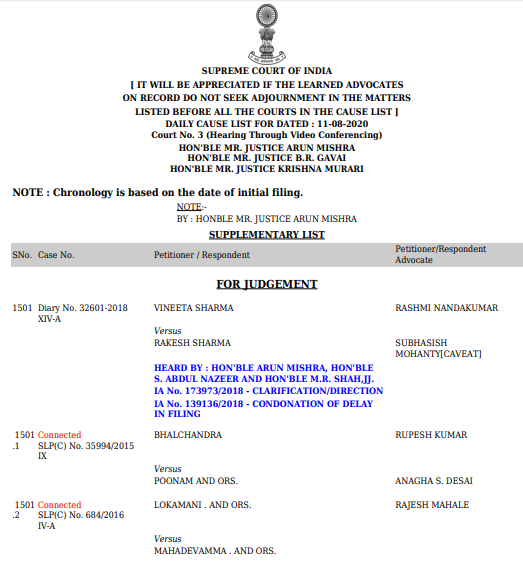 These cases were heard by a three judge bench as one of them arose out of a judgment delivered by Delhi High Court which had also granted certificate to appeal. The High Court has noticed that there is a conflict of opinion between Prakash vs. Phulavati, (2016) 2 SCC 36 and Danamma @ Suman Surpur vs. Amar, (2018) 3 SCC 343 with regard to interpretation of Section 6 of the Hindu Succession Act, 1956 as amended by Hindu Succession (Amendment) Act of 2005. However, the High Court followed the judgment in Prakash V. Phulavati and held, in facts of this case, that, the amendments of 2005 do not benefit the plaintiff as her father passed away on 11th December 1999.

In Prakash V. Phulavati (2015), the Supreme Court bench comprising Justices Anil R. Dave and A.K. Goel had held that the rights under the amendment are applicable to living daughters of living coparceners as on 9-9-2005, irrespective of when such daughters are born. It was held that, there is neither any express provision for giving retrospective effect to the amended provision nor necessary intendment to that effect. This position was reiterated by the bench of Justices R.K. Agrawal and A.M. Sapre in Mangammal vs. T.B. Raju (2018).

In the case of Danamma @ Suman Surpur vs. Amar (2018), the bench comprising Justices A.K. Sikri and Ashok Bhushan had held that the share of the father who died in 2001 would also devolve upon his two daughters who would be entitled to share in the property. "Section 6, as amended, stipulates that on and from the commencement of the amended Act, 2005, the daughter of a coparcener shall by birth become a coparcener in her own right in the same manner as the son. It is apparent that the status conferred upon sons under the old section and the old Hindu Law was to treat them as coparceners since birth. The amended provision now statutorily recognizes the rights of coparceners of daughters as well since birth. The section uses the words in the same manner as the son. It should therefore be apparent that both the sons and the daughters of a coparcener have been conferred the right of becoming coparceners by birth. It is the very factum of birth in a coparcenary that creates the coparcenary, therefore the sons and daughters of a coparcener become coparceners by virtue of birth. Devolution of coparcenary property is the later stage of and a consequence of death of a coparcener. The first stage of a coparcenary is obviously its creation as explained above, and as is well recognized.", it was observed in the said judgment.