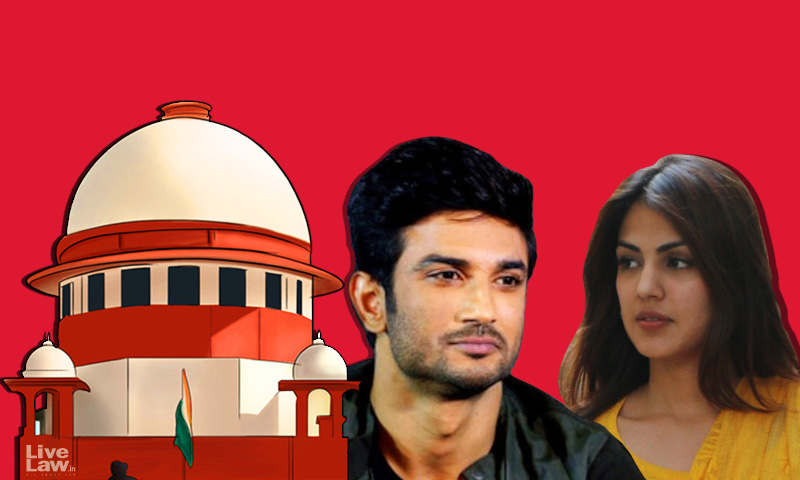 Central Government has approached Supreme Court challenging the Bombay High Court Order granting bail to film actor Rhea Chakraborty in the case registered by the Narcotics Control Bureau(NCB) on the allegation that she had facilitated the procurement of drugs for the late actor Sushant Singh Rajput.A Bench of Chief Justice of India, SA Bobde and Justices AS Bopanna and V Ramasubramanian...

Central Government has approached Supreme Court challenging the Bombay High Court Order granting bail to film actor Rhea Chakraborty in the case registered by the Narcotics Control Bureau(NCB) on the allegation that she had facilitated the procurement of drugs for the late actor Sushant Singh Rajput.

A Bench of Chief Justice of India, SA Bobde and Justices AS Bopanna and V Ramasubramanian likely to hear the plea on March 18

On October 7 the bench of Justice Sarang V Kotwal also allowed the bail applications of Rhea Chakraborty ,Samuel Miranda and Dipesh Sawant, the domestic helps of Sushant Singh Rajput, who were also arrested by the NCB for allegedly procuring drugs for the late actor.

She was arrested on September 8 and had been under custody ever since.

The Court has directed that Rhea should furnish a bond for an amount of Rupees one lakh and that she should mark her presence for ten days in the nearest police station for ten days after release. She should deposit her passport with the Special Court and should not travel outside the country without the prior permission of the court. The Court further ordered that Rhea should inform the investigating officer if she has to leave out of Greater Mumbai.

Similar conditions have been imposed with respect to Miranda and Sawant as well, except that they have been asked to fur"Thenish a bond for Rs. 50,000 each.

Though the Additional Solicitor General, Anil Singh, made a request for a stay on the order for a period of one week for the purpose of filing appeal, the bench turned it town, observing that stringent conditions have been imposed to ensure that the applicants cooperate with the investigation.

The bench also observed that it has held that all offences are non-bailable.

The single bench of Justice Sarang V Kotwal had reserved orders on the bail applications on September 29, after a marathon hearing which lasted from 11 AM till about 7 PM.

Rhea was Sushant's partner and Miranda and Sawant were his house helps.

The main arguments raised by the lawyers for the accused - Advocates Taraq Sayed(for Parihar), Satish Manshinde (for Rhea & Showik), Subodh Desai (for Miranda) and Rajendra Rathod(for Sawant)- were as follows :

No drugs have been recovered from the accused.

NCB has no case that the accused consumed drugs.

Rigour against the grant of bail under Section 37(1) NDPS Act no applicable in the case as the offences relate to small quantities.

The NCB has wrongfully invoked the offence of 'financing illicit trade' and 'harbouring offender' under Section 27A against the accused. The accused were only following the instructions of Sushant, and even as per their case few grams of ganja were purchased for him. So if Sushant, the ultimate beneficiary, is only punishable for the offence relating to small quantity, the accused cannot be booked for a higher punishment(Section 27A is punishable with a minimum of 10 years imprisonment. Consumption of drugs is punishable with a minimum of 6 months imprisonment and maximum of one year imprisonment. Even this punishment can be avoided if the accused volunteers for rehabilitation under Section 64A).

There is no question of 'harbouring' the accused as Sushant was in his house only and the accused were staying with him.

The NCB, represented by Additional Solicitor General Anil Singh, submitted that recovery of contraband was not always necessary for sustaining NDPS offences. He argued that if a person conceals the drug consumption habit by another, that will amount to 'harbouring of the offender'.

He further submitted that the Court has to look into the objectives of the NDPS Act, which are to save the youth of the country from the menace of drugs. Drug offences are worse than murder, as they affect the entire society, he submitted.