BREAKING : 'You Can't File A Petition Against Observations' : SC To Centre On Plea Against Findings In Rhea Chakraborty Bail Order 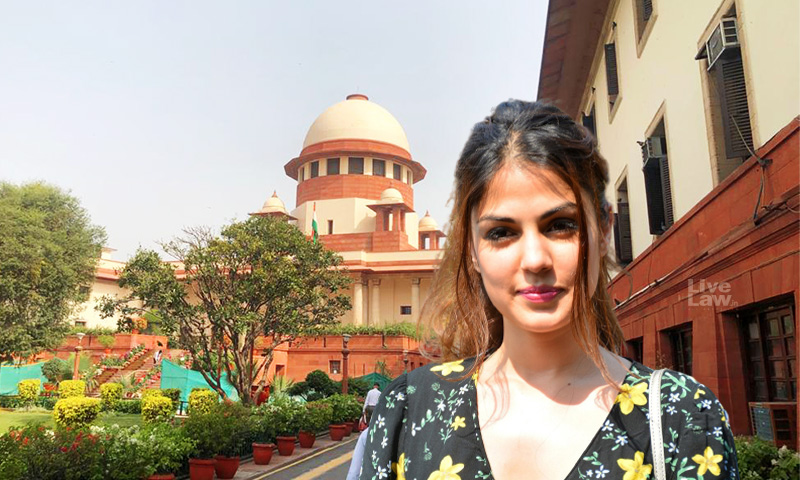 While considering a case related to Rhea Chakraborty, the Supreme Court on Thursday told the Central Government that a petition cannot be challenged against mere observations in a bail order.A bench headed by the Chief Justice of India was considering the petition filed by the Central Government through the Narcotics Control Bureau against the observations made by the Bombay High Court...

While considering a case related to Rhea Chakraborty, the Supreme Court on Thursday told the Central Government that a petition cannot be challenged against mere observations in a bail order.

A bench headed by the Chief Justice of India was considering the petition filed by the Central Government through the Narcotics Control Bureau against the observations made by the Bombay High Court while granting bail to actor Rhea Chakraborty in the NDPS case registered in connection with the death of Sushant Singh Rajput.

Solicitor General Tushar Mehta, appearing for the Centre, told the bench that the grant of bail has not been challenged in the petition.

"My worry is that the court has made certain wide ranging observations about NDPS Act, which make the Act unworkable", the SG said.

The bench highlighted that the Centre's petition does not challenge the bail order and only challenges observations.

"We find the new things you do very difficult to understand. You cannot file a petition challenging the observations. You can only challenge the order. The observations are prima facie", the CJI told the SG.

At this, the SG requested for time to amend the petition to include challenge against the grant of bail. Allowing this request, the bench, also comprising Justices AS Bopanna and V Ramasubramanian, posted the matter to next Monday.

It was on October 7 last year that a single bench of Justice SV Kotwal granted bail to Chakraborty - who was under custody for over a month since September 8- in the case registered by the NCB alleging that she facilitated the procurement of ganja for late actor Sushant Singh Rajput.

The High Court rejected the arguments of NCB that she was part of drug dealers and was involved in facilitating drug trade. The High Court had also made observations regarding the scope of Section 27A of the NDPS Act to hold that mere giving of money to buy drugs and mere concealment of drug use by a person will not amount to "financing illicit trade" and "harbouring of offender" as per the said section.

The High Court observed that there are reasonable grounds for believing that Rhea was not guilty of any offence punishable under Section 27A of the Narcotic Drugs and Psychotropic Substances Act (NDPS Act) or any offence involving commercial quantity.

Section 27A of the Act relates to the offence of "financing illicit trade" and "harbouring" of a person engaged in such trade. This is a serious offence, punishable with a minimum of ten years imprisonment, and is mentioned as one of the offences under Section 37 which deals with rigours of grant of bail.

The Court observed that mere giving money to another would not mean "financing illicit trade".

"...simply providing money for a particular transaction or other transactions will not be financing of that activity. Financing will have to be interpreted to mean to provide funds for either making that particular activity operational or for sustaining it. It is the financial support which directly or indirectly is cause of existence of such illicit traffic. The word "financing" would necessarily refer to some activities involving illegal trade or business.

The allegations against the Applicant of spending money in procuring drugs for Sushant Singh Rajput will not, therefore, mean that she had financed illicit traffic", the HC observed.

The Court also rubbished the allegation that Rhea had "harboured" Sushant Singh Rajput.

"In the present case, no criminal case or FIR was pending against Sushant Singh Rajput. He was residing in his own house and was spending for his own food and other necessities. At that point of time, he had no apprehension of any arrest. Therefore, the act on the part of the Applicant cannot be stretched to attract the allegation of harbouring Sushant Singh Rajput", Justice Kotwal observed in this regard.