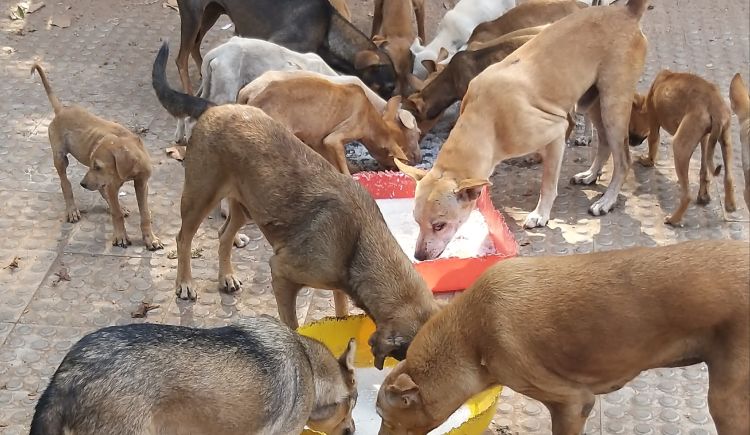 The Supreme Court on Friday stayed the operation of an order of the Delhi High Court which issued a set of guidelines for feeding street dogs after holding that citizens have a right to feed street dogs.A division bench comprising Justices Vineet Saran and Aniruddha Bose stayed the High Court's order on a petition filed by an NGO 'Humane Foundation for People and Animals' challenging it.The...

The Supreme Court on Friday stayed the operation of an order of the Delhi High Court which issued a set of guidelines for feeding street dogs after holding that citizens have a right to feed street dogs.

A division bench comprising Justices Vineet Saran and Aniruddha Bose stayed the High Court's order on a petition filed by an NGO 'Humane Foundation for People and Animals' challenging it.

The bench has also issued notices to the Animal Welfare Board of India, the Government of National Capital Territory of Delhi and other private respondents in the special leave petition.

"Permission to file special leave petition is granted. Issue notice, returnable in six weeks.Meanwhile, operation of the impugned order shall remain stayed", the bench stated in the order.

The petitioner NGO argued that the High Court's directions were contrary to an order passed by the Supreme Court on 18/11/2015 in SLP (c) No. 691 of 2009 directing "High Courts not to pass any order relating to the 1960 Act(Prevention of Cruelty to Animals Act) and the Animal Birth Control (Dog) Rules 2001 pertaining to dogs."

The petitioner contended that the High Court order is based upon several "blatantly misleading, irrelevant and factually incorrect statements and misinformation with regard to dog behaviour, problems associated with stray dogs, general information regarding dogs and as also with respect to the existing laws".

"Given that stray dogs are not owned, they can be very unpredictable. Dogs may bite, attack and kill people and other animals for numerous reasons such as hunger, territorial aggression, overstimulation, redirected aggression, insecurity, fear, defense, genes, breed, injury, sickness, status in pack, etc.

A dog under human supervision and control and dependent on its human caretakers for all of its needs can be prevented from biting and attacking people and other animals by physical restraint, confinement to private property and suppressing aggressive tendencies with care and training. This is not the case with stray dogs, therefore feeding in societies, streets, markets, parks or at any public places is a direct risk to citizens, pedestrians, two- wheeler riders, children and the elderly in particular as well as being violative of various existing laws"

What was the High Court's order?

The petition was filed against the order passed by a single bench of the Delhi High Court in June 2021 in an injunction application which sought to restrain private defendants from feeding stray dogs near the entrance of the suit property.

While deciding the application, a single judge of Justice JR Midha observed thus:

"Animals have a right under law to be treated with compassion, respect and dignity. Animals are sentient creatures with an intrinsic value. Therefore, protection of such beings is the moral responsibility of each and every citizen including the governmental and non-governmental organisations", the High Court had observed.

"AWBI shall ensure that every Resident Welfare Association or Municipal Corporation (in case RWA is not available), shall have an Animal Welfare Committee, which shall be responsible for ensuring compliance of the provisions of the PCA Act and ensure harmony and ease of communication between caregivers, feeders or animal lovers and other residents", the Court had directed.

"If any of the street / community dogs is injured or unwell, it shall be the duty of the RWA to secure treatment for such dog by the vets made available by the Municipal Corporation and / or privately from the funds of the RWA", the High Court said.

Case Title : Human Foundation for People and Animals vs Animal Welfare Board of India and others
Click here to read/download the order