Not Against Right To Protest Even When Legal Challenge Is Pending; But Roads Can't Be Blocked : SC In Farmers Protest Case 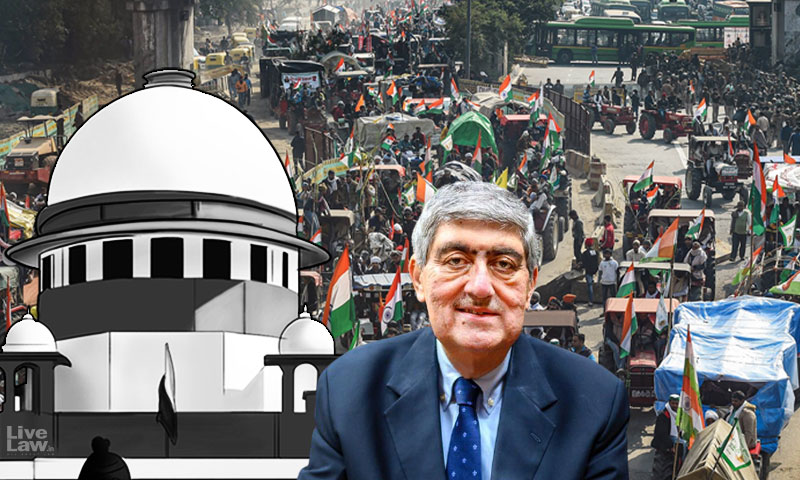 While considering a case against the road blockade as part of the farmers protests, the Supreme Court on Thursday orally remarked that it was not against the exercise of right to protest even when a legal challenge on the issue was pending."Ultimately some solution has to be found.I'm not averse to their right to protest even when legal challenge is pending. But roads cannot be blocked",...

While considering a case against the road blockade as part of the farmers protests, the Supreme Court on Thursday orally remarked that it was not against the exercise of right to protest even when a legal challenge on the issue was pending.

"Ultimately some solution has to be found.I'm not averse to their right to protest even when legal challenge is pending. But roads cannot be blocked", Justice Sanjay Kishan Kaul, the presiding judge of the bench, orally remarked.

The comments assume relevance as another of the Supreme Court recently decided to examine the issue whether a party who has approached the Court can exercise the right to protest in public when the issue was sub-judice. A two-judge bench led by Justice AM Khanwilkar had decided to examine the issue while hearing a petition filed by Kisan Mahapanchayat seeking permission to hold protests against the farm laws at New Delhi's Jantar Mantar region. While hearing that petition, the bench had orally remarked that a party who has approached the court cannot exercise right to protest.

The present case being considered by the bench of Justice Sanjay Kishan Kaul and Justice MM Sundresh is a petition filed by a Noida-resident against the road blockades at Delhi-NCR region as part of the farmers protests. Earlier, the bench had issued notice to 43 farmers organizations in the petitions.

Today, Senior Advocate Dushyant Dave, appearing for few of the organizations, submitted that the roads are not blocked by the farmers but by the police.

"Roads aren't blocked by us. They are blocked thanks to the Police. After stopping us, BJP had a rally at Ramleela Maidan. Why be selective?", Dave submitted. He added that the cause of the problem was the denial of the permission to farmers to stage protests at Ramleela Maidan.

"You may have a right to agitate in any manner but roads should not be blocked", Justice Kaul stated.

"I have travelled 6 times on the road. I think better arrangements can be made by the Delhi police. Let them allow us to come Ramleela Maidan then", Dave submitted. However, when the bench was about to record in the order Dave's submission that the security arrangement was the cause of problem, he requested not to record it and said that he was withdrawing the statement.

Dave also submitted that the present two-judge bench should not hear the matter and that the same should be referred to the three-judge bench which is seized of the similar issues.

Solicitor General Tushar Mehta submitted that this was an attempt to "browbeat the bench" and should not be entertained.  When Dave submitted about denial of permission to go to Ramleel Maida, the SG commented "For some persons Ramleela Maidan should be made a permanent residence!".

As the exchanges between Senior Advocate Dave and SG Tushar Mehta started to get heated, Justice Kaul intervened and said "I like a pleasant environment in my court. We'd thought its the first day(of physical hearing) and there would be a pleasant atmosphere".

"Mr Mehta's presence brings the best out of me", Dave said.

"Both of you need to learn to bear each other", Justice Kaul replied.

The bench stated that it is not concerned with the larger issues but was only concerned with the issue that the roads cannot be blocked in view of the earlier orders. It said that it will decide the contours of the matter first and will take a call on whether to refer to the other bench.

The bench granted three weeks time to the farmers union to file reply and three weeks time thereafter for the rejoinder by the Union and the State Governments. The case is next listed on December 7.
Case Title: Monicca Agarwaal V. Union Of India & Anr| WP(C) 249 OF 2021