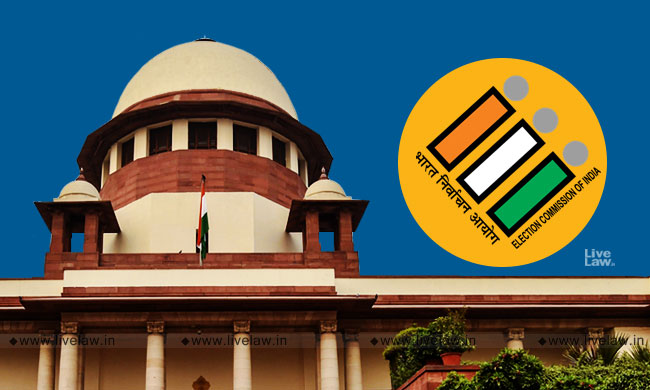 The Supreme Court on Monday issued notice on a PIL to direct the ECI to use its plenary power under Article 324 to nullify the election result and hold fresh elections, if maximum votes have been polled in favour of NOTA in a particular constituency, and restrict the candidates who have participated in the invalidated election from contesting the fresh election.The plea by Supreme Court...

The Supreme Court on Monday issued notice on a PIL to direct the ECI to use its plenary power under Article 324 to nullify the election result and hold fresh elections, if maximum votes have been polled in favour of NOTA in a particular constituency, and restrict the candidates who have participated in the invalidated election from contesting the fresh election.

The plea by Supreme Court lawyer and BJP leader Ashwini Upadhyay, in the alternative, prays that the court direct the Centre to take apposite steps to invalidate the election result and hold fresh election, if maximum votes have been polled in favour of NOTA in a particular constituency, and to restrict the contesting candidates.

Senior Advocate Menaka Guruswamy, appearing for the petitioner, submitted that though the petitioner has approached the statutory authorities, he has not received any response.

"If some political party with influence on people manages to get candidates rejected seats will remain unfilled in Parliament. It is a constitutional problem. If your argument is accepted, and all candidates are rejected and that constituency goes unrepresented completely. How will you constitute a valid parliament ?" Chief Justice SA Bobde asked the petitioner.

"The very fact that you'll have a right to reject will lead to political parties to get acceptable candidates" Dr Gruswamy replied.

"Underlying suggestion are very hard to be accepted, even though we understand importance of what you are saying", CJI rsaid.

The plea contends that political parties choose contesting candidates in a very undemocratic manner without consulting electors, that is why many times people in constituencies are totally discontented with candidates presented before them.

"This problem can be solved by holding a fresh election if maximum votes are polled in favour of NOTA. In such a situation, the contesting candidates should be considered as rejected and not be allowed in the fresh election. Right to reject and elect a new candidate will give power to the people to express their discontent. If voters are dissatisfied with the background of the contesting candidate, they will opt NOTA to reject such candidate and elect a new candidate", it is submitted.

The plea urges that the right to reject will check corruption, criminalisation, casteism, communalism, linguism, regionalism- the 7 menaces of democracy- as the political parties would be forced to give tickets to honest and patriotic candidates. It is advanced that if candidates on whom political parties spend crores of rupees are rejected, they would abstain from doing so; right to reject contesting candidates would mean true democracy as the people would be able to elect their representatives in true sense and it will make contesting candidates accountable in their functioning as if electors will reject them, they would not get a next chance of contesting.

It is averred that the right to Reject was first proposed by the Law Commission in its 170th Report in 1999. It also suggested that the contesting candidates should be declared elected only if they have obtained 50%+1 of the valid votes cast. Similarly, the Election Commission endorsed 'Right to Reject', first in 2001, under Mr. James Lyngdoh (the then CEC), and then in 2004 under Mr. TS Krishnamurthy (the then CEC), in its Proposed Electoral Reforms. The ECI also proposed a legislative amendment to Rule 22 and 49-B of the Election Rules to introduce the NOTA and protect secrecy of voting. Likewise, 'Background Paper on Electoral Reforms', prepared by the Ministry of Law in 2010, proposed that if a certain percentage of the vote is negative, then the election result should be nullified and a new election should be held. It proposed: "Both the Election Commission and Law Commission recommend that a negative or neutral voting option be created. Negative or neutral voting means allowing voters to reject all of the candidates on the ballot by selection of a 'none of the above' option instead of the name of a candidate on the ballot. In such a system there could be a provision whereas if a certain percentage of the vote is negative or neutral, then the election results could be nullified and a new election conducted".

"Given the inaction on the government's part, the People's Union for Civil Liberties filed a PIL on this issue in 2004 and in 2013 the Supreme Court struck down Rules 41(2) and (3) and 49-O of the Election Rules as being ultra vires Section 128 of the Representation of the People Act 1951 and Article 19(1)(a) of the Constitution to the extent they violated the secrecy of voting. Citing Section 128, RPA and Rules 39(1), 41, 49M and 49O of the Election Rules, the Court noted that the "secrecy of casting vote is duly recognized and is necessary for strengthening democracy" to maintain the purity of elections", it is argued.

It is pointed out that consequently, given that the right to vote and the right not to vote had been statutorily recognized, the Apex Court held that secrecy had to be maintained regardless of whether voters decide to cast or not cast their votes. The Apex Court also relied on international principles governing the right to secrecy as an integral part of voting and free elections under Article 21(3) of the Universal Declaration of Human Rights and Article 25(b) of the International Covenant on Civil and Political Rights ICCPR. It therefore ruled that voters should have the option of rejecting all candidates who were standing for elections in their constituency and directed the ECI to include the option of NOTA in all Electronic Voting Machines.

"The premise of the Supreme Court's decision was that secrecy of voting is crucial to maintain the purity of the electoral system. Consequently, introducing NOTA, by guaranteeing the secrecy in casting a negative/neutral vote, would increase public participation in the electoral process, which is fundamental to the "strength of democracy." Given that democracy is "all about choice" and voting constitutes its very "essence", nonparticipation in the election can cause "frustration and disinterest". Thus, the Supreme Court opined that NOTA would empower the people, thereby accelerating effective political participation, since people could abstain and register their discontent with the low quality of candidates without fear of reprisal; simultaneously, it would foster the purity of the election process by eventually compelling parties to field better candidates, thereby improving the current situation", reads the petition.

It is pointed out that, however, the existing NOTA system is not the same as the right to reject. For example where even if there are 99 votes cast in favour of NOTA, out of a total 100, the candidate who got only a vote will be declared the winner, for having obtained the most number of valid votes. The Election Commission issued a similar clarification that no re-elections will be called based on a cumulative reading of Rule 64(a) of the Election Rules and Sections 53(2) and 65, RPA. This is because the stated reason for ECI's demanding the introduction of NOTA was apparently to ensure the secrecy to the voter casting a negative vote and to prevent a bogus vote in their place; the right to reject did not figure in their original demands.

"This is evident in the Supreme Court's judgment – in terms of its emphasis on secrecy described above and the lack of any discussion on the right to reject, which was not prayed for by the PUCL. Instead, the Supreme Court focused on how it hoped that NOTA would eventually pressurize parties to field sound candidates", it is submitted, stating that Columbia, wherein if the blank vote gets a majority (50%+1), the election needs to be repeated and the earlier candidates in the invalidated election cannot stand again.

Upadhyay urges that good governance, which is purportedly the motivating factor behind the right to reject, cannot be successfully achieved without nullifying the election if NOTA gets maximum votes. The plea states that the Centre should also implement the suggestions of the Venkatchaliah Commission and Law Commission of India on decriminalizing the politics and increasing political awareness, and introduce other provisions such as inner-party transparency and election finance reform.