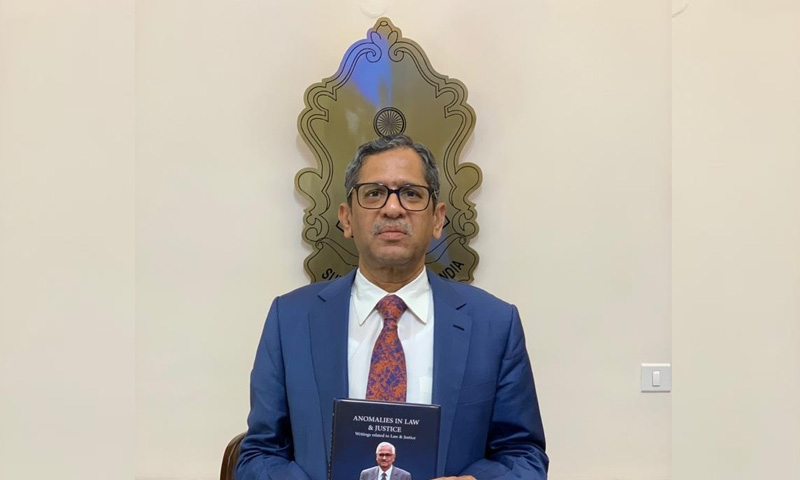 While delivering the 17th Justice P D Desai memorial lecture on "Rule of Law", CJI Ramana on Wednesday stated that it is imperative to start a discourse as to how social media trends can affect the institutions.

"While there is a lot discussion about the pressure from the executive, it is also imperative to start a discourse as to how social media trends can affect the institutions." CJI said.

CJI however clarified that the same should not be understood as meaning that Judges and the Judiciary need to completely disassociate from what is going on. He added that Judges cannot stay in "ivory castles" and decide questions which pertain to social issues.

"The oath we took, to perform our duties 'without fear or favour, affection or ill-will', applies equally to governmental and non-governmental entities. The ultimate responsibility of a judge is, after all, to uphold the Constitution and the laws. Reason, reasonableness and protection of human dignity are the values that will serve us well." CJI said

With regards the concept of Rule of Law and the different principles that have been formulated, CJI emphasised the following 4 principles, in consideration of the current events across the globe.

• Laws must be clear and accessible

CJI stated that it is a fundamental point that when laws are expected to be obeyed, the people at least ought to know what the laws are. There cannot therefore be secretive laws, as laws are for the society. Further, the laws should be worded in simple, unambiguous language.

• Idea of Equality before the law

Referring to the second principle, CJI stated that Laws are to be applied on an equal basis in a non-arbitrary fashion.

"An important aspect of "equality before law" is having equal "access to justice". I must emphasize that, in a democratic country like ours, access to justice forms the bedrock of the "Rule of Law". However, this guarantee of equal justice will be rendered meaningless if the vulnerable sections are unable to enjoy their rights because of their poverty or illiteracy or any other kind of weakness." CJI said

• Presence of a strong Independent Judiciary

CJI stated that the Judiciary is the primary organ which is tasked with ensuring that the laws which are enacted are in line with the Constitution.

"This is one of the main functions of the judiciary, that of judicial review of laws. The Supreme Court has held this function to be a part of the basic structure of the Constitution, which means that the Parliament cannot curtail the same."

However CJI further opined that the importance of the Judiciary should not blind us to the fact that the responsibility of safeguarding constitutionalism, lies not just on the Courts, and all the three organs of the State, i.e., the executive, legislature and the Judiciary , are equal repositories of Constitutional trust

CJI stated that for the Judiciary to apply checks on governmental power and action, it has to have complete freedom. He added that the judges should not be swayed by the emotional pitch of public opinion either, which is getting amplified through social media platforms, and have to be mindful of the fact that the noise thus amplified is not necessarily reflective of what is right and what majority believes in.

"The new media tools that have enormous amplifying ability are incapable of distinguishing between right and wrong, good and bad and the real and fake. Therefore, media trials cannot be a guiding factor in deciding cases" CJI said.

CJI stated that to advance the "Rule of Law" there is a need to create a society where "Rule of Law" is respected and cherished. Citizens can strengthen the "Rule of Law" by being knowledgeable about it and by applying it to their daily conduct and pushing for justice when needed.

While urging both young and senior counsels to extend a helping hand to those in need of justice, CJI stated that there is a need of professional ideology about social responsibility and economy, gender, class or caste should never be a hinderance in the path to secure justice.

CJI said that it has always been well recognised that the mere right to change the ruler, once every few years, by itself need not be a guarantee against tyranny, and the idea that people are the ultimate sovereign is also to be found in notions of human dignity and autonomy.

"A public discourse, that is both reasoned and reasonable, is to be seen as an inherent aspect of human dignity and hence essential to a properly functioning democracy. As Professor Julius Stone observed in his book "The Province of Law", elections, day to day political discourses, criticisms and voicing of protests is integral to the democratic process." CJI said

While talking about the issue of 'gender equality', CJI stated that most nations have recognised equality and dignity of women, either constitutionally or statutorily. He added that the legal empowerment of women not only enables them to advocate for their rights and needs in society, but it also increases their visibility in the legal reform process and allows their participation in it.

"Bias and prejudice necessarily lead to injustice, particularly when it relates to the minorities. Consequently, the application of the principles of Rule of Law in respect of vulnerable sections has to necessarily be more inclusive of their social conditions that hinder their progress." CJI said.