Ruling Party Not Only Silent On Hate Speech But Also Endorsing It : Justice Rohinton Nariman 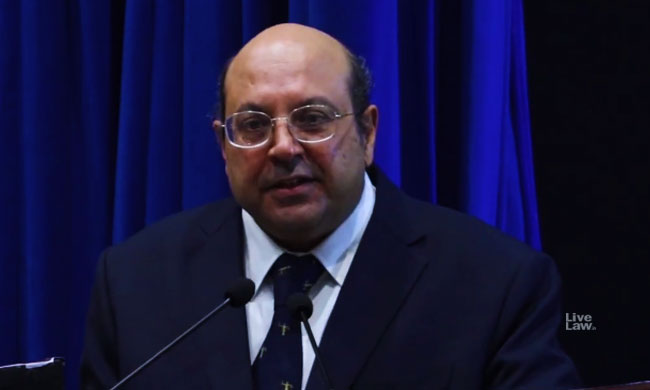 Speaking at a webinar, former Supreme Court judge Justice Rohinton Fali Nariman recently expressed concerns about the rise of hate speech in the country."Unfortunately, we have the other higher echelons of the ruling party not only being silent qua hate speech but otherwise endorsing them", he said. He also said that there are people who are "actually calling for the genocide of an entire...

"Unfortunately, we have the other higher echelons of the ruling party not only being silent qua hate speech but otherwise endorsing them", he said. He also said that there are people who are "actually calling for the genocide of an entire people" and "we find the great reluctance somehow of the authorities to book these people".

The former Supreme Court judge also spoke about the need to do away with the sedition laws.

"When you have Article 19(1)(a) being administered as it is being administered today, there is a big red signal which is put up so far as the rule of law is concerned. It is the time to completely do away with the sedition laws, allow free speech so long as ultimately it is not exhort somebody to violence", Justice Rohinton Nariman has urged.

The former Supreme Court judge was speaking on "Constitutional Underpinnings of the Rule of Law" at the inauguration of the D. M. Harish School of Law, Mumbai.

"Article 19 contains the difference between democracies like ours and dictatorships which are veiled as democracies. 19(1)(a) is the single most important and cherished human right, which is the right to freedom of speech and expression. Unfortunately, of late, we have had in this country, young persons, students, stand-up comedians and the like, all being booked for freely criticising the government of the day under sedition laws which are really colonial in nature and have no place under our Constitution. On the other hand, you have persons giving hate speech, what is called 'fighting words', actually calling for the genocide of an entire people, and we find the great reluctance somehow of the authorities to book these people", Justice Nariman has commented.

"It was heartening to note that at least a little later, the Vice President of the country in a speech said that hate speech is unconstitutional, not only is it Unconstitutional but it happens to be a criminal act. It is criminalised in sections 153A and 505(c) of the IPC. In fact, unfortunately, though in practice a person can be given up to 3 years' imprisonment, this never happens because no minimum sentence is prescribed. If you really want to strengthen rule of law as contained in our Constitution, I would suggest strongly that the Parliament amend these provisions to provide a minimum sentence for the act, for it to be a deterrence for persons who make hate speeches of this kind", he urged

"Unfortunately, we have the other higher echelons of the ruling party not only being silent qua hate speech but otherwise endorsing them! We heard the other day from the very head of the party a juxtaposition of a Mogul emperor known for being a bigot, namely Aurangzeb, as against Shivaji who was known to be a secular leader. If, as a matter of fact, fraternity is a cardinal value in our Constitution and you want to engage persons in becoming a brotherhood, I would have thought that you should have chosen Mogul emperors such as Babar or his grandson Akbar. Akbar was famous for being perhaps the most secular ruler that any nation has ever known at any point of time and he took after his grandfather Babar", expressed Justice Nariman

He read out you a letter written by Babar to his son Humayun one year before he died, telling his son how to rule Hindustan "which he had conquered, so to speak, after the battle of Panipat".
The letter of Babar was as follows - "Oh my son, the realm of Hindustan is full of diverse creeds...It is but proper that you, with heart cleansed with all religious bigotry, must dispense justice according to the tenets of each community, and particularly refrain from sacrifice of cow, for that is where lies the conquest of the hearts of the people of Hindustan; and the subjects of the realm will, through royal favour, be devoted to thee... And the temples and abodes of worship of every community under the imperial sway, you should not damage. Dispense justice so that the sovereign may be happy with the subjects and likewise the subjects with their sovereign. The progress of Islam is better by the sword of kindness, not by the sword of oppression".
Continuing the speech, Justice Nariman said :

"A beautiful letter, his grandson carried all this in practice. His grandson had the famous Ibadat Khana built in 1575 where persons from all religions of the world, including the Charvaka school which is the ancient Hindu materialist school, were present and debated freely before the Emperor. The Emperor in fact greatly not only acknowledged but furthered the cause of every religious faith so much so that many religious faiths said they had exclusively somehow got to the Emperor and converted him. The Emperor came out with the Din-i-Ilahi which failed because it was very eclectic and it had no priesthood etc. But The idea was fantastic. The idea was to bring together mankind as a common group which custom has divided".
[Sabarimala case] 'Despite 5 SC judges directing so in their judgment, no woman permitted entry; Unfortunately, SC itself sent it for review'

He canvassed how in the 1832 US Supreme Court case of Worcester v. Georgia, Chief Justice Marshall went out of his way to decide a particular case in favour of a cleric called Worcester- "The state of Georgia had apparently entered into a treaty with Cherokee Indians which he did not somehow or the other honour. Worcester was required to take out A license under Georgia's law and the matter went to the Georgia Supreme Court. The Supreme Court said you must take out that licence. The US Supreme Court reversed it, chief justice Marshall saying that as and when you happened to be on Cherokee land, it is Cherokee Indian law which applies and not Georgia. Andrew Jackson who was the President at that time said that CJ Marshall has laid down his judgment and let it be enforced by him"

"Today, such things are almost unthinkable! Why do I Say 'almost'? Because we have also had the Sabarimala case. Despite five learned judges of the Supreme Court having laid down that women between the ages of 10 and 50 can enter, no woman was allowed to enter!", expressed the former judge.

Continuing, he said, "And most unfortunately, the Supreme Court itself sent this judgment by way of a review petition, something unheard of, to a bench of nine judges to be decided along with other matters. So now Sabarimala has gone into limbo"

"So we find that whatever we take for granted in terms of constitutional rule of law cannot ever be taken for granted. It is very important to remember that eternal vigilance is necessary not only for liberty but for liberty enforced by courts, which is the rule of law of this country", he cautioned.

"Two words added by the 46th amendment- 'socialist' and 'secular'- were proposed by Professor K. T. Shah in the constituent assembly. Dr. Ambedkar said 'no, it was not necessary to add either 'socialist' or 'secular' because 'socialism' was a creed you could find in any directive principle of state policy and 'secular' our Constitution was'. So he found it unnecessary at that time. Now that we have these two words, they are both pregnant with meaning", the former judge had said.

"'Socialist', in its broad sense, denotes a government for the people, by the people. It means that You will treat all people with equal respect...You are a 'secular' State in 2 senses – one, the State itself has no religion, and second, the State does not in any manner look upon one religion with favour and another with disfavour. In short, all the religions are to be treated alike. This is a very important concept in today's time", he remarked.

"Liberty (as in the Preamble) is extremely important because not only is the liberty of thought and expression but also liberty of belief, faith and worship, adding strength to the word 'secular'. So that what distinguishes this democracy from other so-called democracies is the fact that you have freedom of speech and expression and that everybody is entitled to profess whichever faith in terms of religion, he chooses", he continued.

"The Cardinal and most important principle of the Preamble is fraternity- that All men are brothers and sisters, whatever caste, creed etc. This alone will ensure unity and integrity of the nation", he stated. "

We are reminded, as in the recent past, that you judges are not elected representatives, you are appointed. So how can you annul laws made by the legislature which consists of elected representatives. Fortunately, for us, the answer to that question is in the Constitution itself and we don't need to labour it. But these heads keep rearing themselves from time to time and have to be scotched by the court clearly stating that in our constitutional law, it is the higher judiciary comprising the Supreme Court and the High Courts which ultimately are the arbiters who decide and that the laws which are unconstitutional must go. In fact we have gone much further than just this as we have laid down in the seminal decision of 13 judges in Kesavananda Bharati that if the Constitution itself is Amended contrary to the basic structure, the Constitutional amendment itself is liable to be struck down", highlighted Justice Nariman.