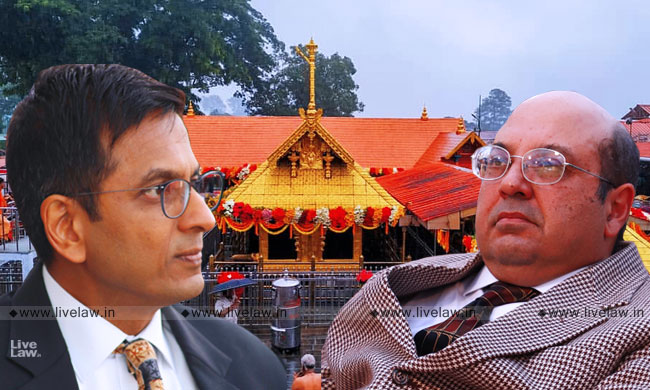 The Ministers, who failed to act in aid of court's judgment, would violate their "constitutional oath to uphold, preserve, and defend the Constitution" and so far as the citizenry was concerned, they'd be in violation of their fundamental duties entailed in Article 51A of the Constitution, in particular, clauses (a), (e), and (h) thereof. In their dissenting judgment against the...

The Ministers, who failed to act in aid of court's judgment, would violate their "constitutional oath to uphold, preserve, and defend the Constitution" and so far as the citizenry was concerned, they'd be in violation of their fundamental duties entailed in Article 51A of the Constitution, in particular, clauses (a), (e), and (h) thereof.

In their dissenting judgment against the Sabrimala Review, Justice RF Nariman, also speaking for Justice Dhananjaya Y. Chandrachud gave strong remarks against non-compliance with the Supreme Court's original decision in the case.

Justice Nariman said that while the citizenry was constitutionally empowered to express bona fide criticism of a judgment, it was not permissible to "thwart" or "encourage persons to thwart", the directions or orders of the highest court. He observed that there was no "error apparent on the face of the record" in the original decision of the court and as such, the review petitions were liable to be dismissed.

Holding that under the constitutional scheme, the Supreme Court was given a certain "pride of place", he said,

"…once a judgment is pronounced by the Constitution Bench and a decree on facts follows, the said decree must be obeyed by all persons bound by it. In addition, Article 144 of the Constitution mandates that all persons who exercise powers over the citizenry of India are obliged to aid in enforcing orders and decrees of the Supreme Court. This then is the constitutional scheme by which we are governed – the rule of law, as laid down by the Indian Constitution."

Article 144 reads as under:

"All authorities, civil and judicial, in the territory of India shall act in aid of the Supreme Court."

Further highlighting the "non-negotiable obligation" of the authorities to enforce the judgments, he said,

"The Constitution places a non-negotiable obligation on all authorities to enforce the judgments of this Court. The duty to do so arises because it is necessary to preserve the rule of law. If those whose duty it is to comply were to have a discretion on whether or not to abide by a decision of the court, the rule of law would be set at naught."

Justice Nariman observed that the Ministers, who failed to act in aid of court's judgment, would violate their "constitutional oath to uphold, preserve, and defend the Constitution" and so far as the citizenry was concerned, they'd be in violation of their fundamental duties entailed in Article 51A of the Constitution, in particular, clauses (a), (e), and (h) thereof.

"It is, therefore, incumbent upon the executive branch of Government and all MPs and MLAs to faithfully aid in carrying out decrees and orders passed by the Supreme Court of India when such decrees and orders command a particular form of obedience, even where they are not parties to the litigation before the Supreme Court. Any deviation from this high constitutional principle is in derogation of the oath taken by every Minister and Legislator during his term of office. Once this is clearly understood and followed, the rule of law is established, and the shameful spectacle of political parties running after votes, or instigating or tolerating mob violence, in defiance of decrees or orders passed by the Supreme Court of India does not reign instead."

In September 2018, a five-judge bench, in a 4:1 majority, permitted entry of women of all age groups to the Sabarimala temple, holding that 'devotion cannot be subjected to gender discrimination'.

In review of the said decision, the majority of CJI Ranjan Gogoi, Justice Khanwilkar and Indu Malhotra decided to keep the matter pending until a larger bench determines questions related to essential religious practices.

Justice Nariman and Justice Chandrachud dissented by dismissing all review pleas and directing compliance with the Supreme Court's original decision. They opined that most of the arguments raised in the review petitions were already argued during the hearing of the writ petitions and were dealt with in the judgment of 28th September 2018. In this regard they remarked,

"…A review of a judgment is a serious step and reluctant resort to it is proper only where a glaring omission or patent mistake or like grave error has crept in earlier by judicial fallibility. A mere repetition, through different Counsel, of old and overruled arguments, a second trip over ineffectually covered ground or minor mistakes of inconsequential import are obviously insufficient."

With the above observations, the minority bench directed the Kerala Government to publicize the original decision of the Supreme Court in the Sabarimala case and to devise modalities for implementing the judgment.

"State of Kerala is directed to give wide publicity to this judgment through the medium of television, newspapers, etc. The government should take steps to secure the confidence of the community in order to ensure the fulfillment of constitutional values…Organised acts of resistance to thwart the implementation of this judgment must be put down firmly. Yet in devising modalities for compliance, a solution which provides lasting peace, while at the same time reaffirming human dignity as a fundamental constitutional value, should be adopted. Consistent with the duties inhering in it, we expect the State government to ensure that the rule of law is preserved. All petitions are disposed of accordingly," the bench concluded.