Sabarimala Reference : 9-Judge Bench To Consider Tomorrow The Issue Whether Reference To Larger Bench Can Be Made In A Review Petition [Read Notice] 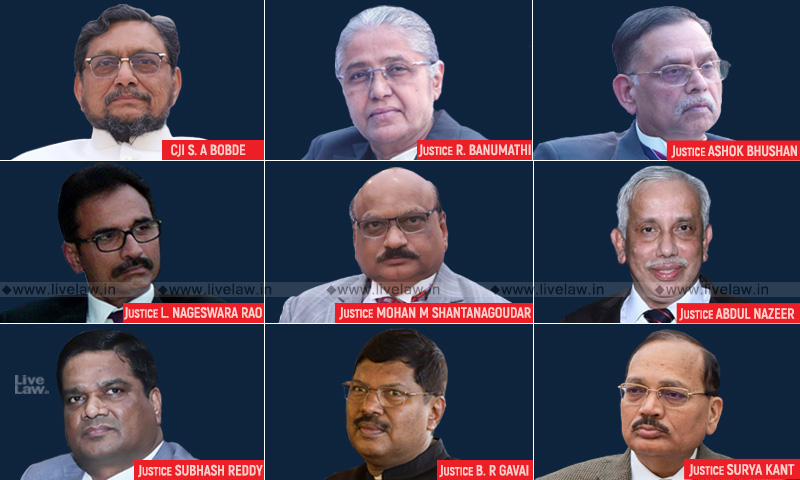 The 9-judge bench of the Supreme Court constituted to answer the questions mentioned in the Sabarimala review order will consider the preliminary issue whether a reference is possible in a review petition.

"Whether this Court can refer questions of law to a larger bench in a review petition?" - this issue will be considered by the bench when it assembles on February 6.

In the hearing held on Monday, Senior Advocate F S Nariman had raised a preliminary objection to the proceedings by stating that the Sabarimala review bench could not have made the reference.

It was submitted by the renowned jurist that the scope of review was very narrow to examine the correctness of the original judgment on limited grounds. Therefore, the review jurisdiction cannot be invoked to  refer to larger bench certain questions of law, which are not directly arising from the original judgment, submitted Senior Advocate Nariman.

He remarked that the order passed by the Sabarimala review bench on November 14, 2019 was an 'adjournment order' and not a reference.

On this, CJI Bobde, who is heading the 9-judge bench, observed that this could be considered as a preliminary issue.

On January 13, the CJI had asked the lawyers in the case to have a conference for re-framing the issues. This was after the bench agreed with the submissions that the 7 questions mentioned in the order passed by the Sabarimala review bench on November 14, 2019 were too broad.

After that, the lawyers had a conference on January 17, but could not reach a common ground regarding the issues.

On November 14, a 5-judge bench headed by the then CJI Ranjan Gogoi observed that certain issues in the Sabarimala review were common to the pending cases concerning women entry in Mosques, validity of the practice of Female Genital Mutilation among Dawoodi Bohra community and the right of Parsi women who had married outside community to enter Fire Temples.

According to the November 14 order, the following are the issues, that 'could' arise for the consideration of larger bench :