Sabarimala Reference: SC Gives Reasons For Holding That Questions Of Law Can Be Referred To Larger Bench In Review [Read Order] 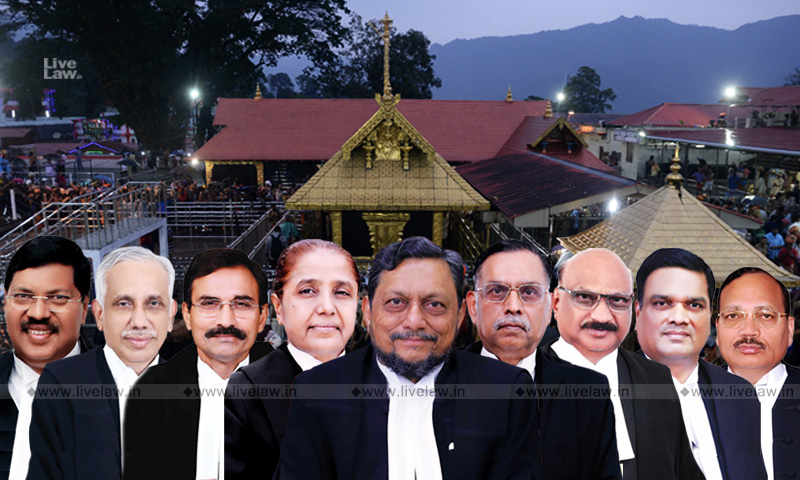 The Supreme Court has passed an order detailing the reasons for holding that it can refer questions of law to a larger bench in a review petition. The 9 judge bench headed by CJI SA Bobde had on February 10 dismissed the objections regarding the maintainability of reference in Sabarimala Review Petitions. On that occasion, the bench had stated that it will give reasons for the...

The Supreme Court has passed an order detailing the reasons for holding that it can refer questions of law to a larger bench in a review petition.

The 9 judge bench headed by CJI SA Bobde had on February 10 dismissed the objections regarding the maintainability of reference in Sabarimala Review Petitions. On that occasion, the bench had stated that it will give reasons for the conclusion later.

Now, in the judgment released on Monday in the case titled Kantararu Rajeevaru vs Indian Young Lawyers Association, the Court has given its reasons for holding that there is no bar for referring questions of law to a larger bench on a review.

The Court noted that the Article 137 of the Constitution of India empowers the Supreme Court to review any judgment pronounced or order made by it subject to the provisions of any law made by the Parliament or any rules made under Article 145. It observed:

Interpreting the Rule, the court said that there is no limitation for the exercise of power by this Court in review petitions filed against judgments and orders in proceedings other than civil proceeding or criminal proceedings. It said:

Construction of Order XLVII, Rule 1 of the Supreme Court Rules should be made by giving due weight to the punctuation mark 'comma' after the words "the Court may review its judgment or order". The intention of the rule making authority is clear that the above mentioned part is disjunctive from the rest of the rule. Moreover, the words "but no application for review will be entertained in a civil proceeding except on ground mentioned in Order XLVII, Rule 1 of the Code and in a criminal proceeding except on the ground of an error apparent on the face of record" are exceptions to the opening words of Order XLVII Rule 1, namely, "the Court may review its judgment or order". Therefore, there is no limitation for the exercise of power by this Court in review petitions filed against judgments and orders in proceedings other than civil proceeding or criminal proceedings. '

Reference Can Be Made In A Pending Review Petition

Another contention was that a reference can be made only after the grant of review and not in a pending review petition. Disagreeing with that, the bench observed:

Reference to a larger bench can be made in any cause or appeal as well as in any 'other proceeding'. The term 'proceeding' is a very comprehensive term and generally speaking, means a prescribed course of action for enforcing a legal right. It is a term giving the widest freedom to a Court of law so that it may do justice to the parties in the case . There cannot be any doubt that the pending review petition falls within the purview of the expression "other proceeding". The reference has been made in the course of pending review petitions.

No Matter Is Beyond Jurisdiction Of Superior Court Of Record

Referring to Article 142 of the Constitution of India, the bench said that the same enables it to make any order as is necessary for doing complete justice in any cause or matter pending before it.

"The expression 'cause' or 'matter' would include any proceeding pending in Court and it would cover almost every kind of proceeding pending in this Court including civil or criminal proceedings10 . As such, the expression 'cause or matter' surely covers review petitions without any doubt. Therefore, it is well within the province of this Court to refer questions of law in pending review petitions. "

Referred Questions Are Of Utmost Importance

Another submission made was that the Court should not give speculative opinions or answer hypothetical questions. The court said;

"The reference of questions of law pertaining to the scope of Articles 25 and 26 of the Constitution of India are of utmost importance requiring an authoritative pronouncement by a larger bench, especially in light of the view of the reference Bench that there is a conflict between the Court's judgments in Shirur Mutt (supra) and Durgah Committee (supra). "

The Court also rejected the contention that the pure questions of law cannot be referred to a larger bench,. The bench said:

" We do not agree. It is not necessary to refer to facts to decide pure questions of law, especially those pertaining to the interpretation of the provisions of the Constitution. In fact, reference of pure questions of law have been answered by this Court earlier. One such instance was when this Court was convinced that a larger bench has to discern the true scope and interpretation of Article 30 (1) of the Constitution of India. "

On November 14, a 5-judge bench headed by the then CJI Ranjan Gogoi observed by 3:2 majority that certain issues in the Sabarimala review were common to the pending cases concerning women entry in Mosques, validity of the practice of Female Genital Mutilation among Dawoodi Bohra community and the right of Parsi women who had married outside community to enter Fire Temples. On that count, the majority decided to keep the review petitions in Sabarimala matter pending until a larger bench determined questions related to essential religious practices.

Some of the petitioners raised a preliminary objection that the 5-judge bench could not have made the reference while exercising review jurisdiction, especially as that bench had not found any error apparent on the record of the original judgment rendered on September 28, 2018.

On February 6, the 9-judge bench reserved orders on the preliminary issue.

Though the 9-bench judge resumed hearing on the merits on February 17, the proceedings got suspended later.

The following are the issues framed by the 9-judge bench for consideration :

1. What is the scope and ambit of right to freedom of religion under Article 25 of the Constitution of India?

4. What is the scope and extent of the word 'morality' under Articles 25 and 26 of the Constitution of India and whether it is meant to include Constitutional morality?

5. What is the scope and extent of judicial review with regard to a religious practice as referred to in Article 25 of the Constitution of India?

6. What is the meaning of expression "Sections of Hindus" occurring in Article 25 (2) (b) of the Constitution of India?