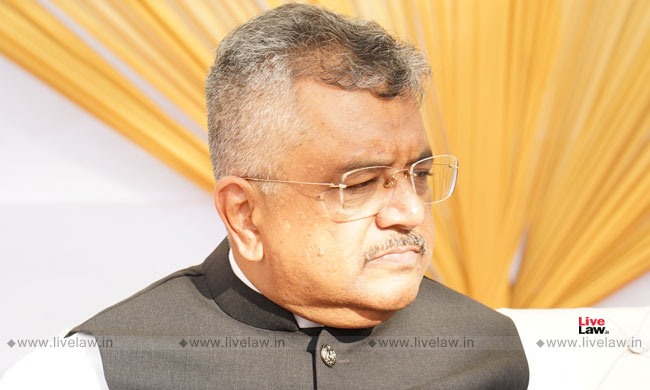 The 9-Judge Bench constituted by Chief Justice SA Bobde has commenced hearing on the issues mentioned in the Sabarimala reference Order.

Solicitor General Tushar Mehta commenced his arguments, drawing the bench's attention to Article 25(1)- " 'all persons are equally entitled to freedom of conscience and the right freely to profess, practise and propagate religion'...'equally entitled'- this was taken from the British where it was used in the context of one religion and different aspects. Here, because the state has no religion, it means Hindus and Muslims are equally entitled, there is no dominance of one over the other"

"There are two limitations to this right- public order, morality, health, and any of the grounds in Part III...in Article 26, there is no Part III. Please mark the distinction. The administrative right of religious  denominations is restricted by only public order, morality and health...essentially, Art. 26 would also be subject to other provisions of Part III. I am not making any high-pitched argument that it is not. Like R. C. Cooper says that each Fundamental Right is affected by the others...", he continued.

Nine-Judge bench on hearing the issues of religious rights referred in #Sabarimala review has assembled pic.twitter.com/5btA0Tz613

Discussing Article 25(2), he advanced, "this is the most enlightening provision in the Constituent Assembly debates"

In as much as sub-clause (a) of Article 25(2) permits the continuance of of a law "regulating any economic, financial, political or other secular activity which may be associated with religious practice" as well as allows the State to make such law, Chief Justice S. A. Bobde noted,

"'religious practice' cannot be regulated per se...There is no generis as such. But 'secular activity' will take colour from 'economic', 'financial', 'political'...", submitted the SG.

Further, he proceeded to canvass the 7-judge bench decision of Shirur Mutt, which is propped up as being in conflict with the five-judge ruling in Dargah Committee-

"One of the questions Your Lordships have framed is whether a person not belonging to a religious denomination or religious group can question a practice of that religious denomination or group by filing a PIL. Can a busybody just walk inside the court and ask for a constitution bench to examine any religious practice?...the striking nature of each of the judgments that will be cited before Your Lordships is that, one, in those cases, the affected parties were before the court, and two, there was a challenge to a legislative act"

"The Preamble is not cited in any of the subsequent judgments. Your Lordships may take the view that 'religious practice' takes its colour from the Preamble- 'liberty of thought, expression, belief, faith and worship'. These are words in the Preamble to the Constitution, though not explicitly used in 25, 26", he continued.

In so far as the apex court, in Shirur Mutt, relied on the Oxford dictionary definition of 'religious denomination, 'a collection of individuals classed together under the same name: a religious sect or body having a common faith and Organisation and designated by a distinctive name', the SG averred that the definition has come to be treated as "sacrosanct", as if it is a "statutory definition".

"Your Lordships have to decide if the definition of religious denomination is correct", he suggested.

In context of Article 26 conferring on a religious denomination the right to manage its own affairs in matters of religion, he quoted from Shirur Mutt, "The question is, where is the line to be drawn between what are matters of religion and what are not".

"There is no clarity as to where 'religious practice' stops and 'secular activity' begins", he submitted.

"A religion may not only lay down a code of ethical rules for its followers to accept, it might prescribe rituals and observances, ceremonies and modes of worship which are regarded as integral parts of religion, and these forms and observances might extend even to matters of food and dress", he recited from Shirur Mutt.

"Your Lordships have to decide whether all this falls under the purview of religion, and whether the essentiality test is correct. And if yes, that a ritual, observance, ceremony or mode of worship is an essential practice of a religion is to be decided by the court or by the religious denomination", he ventured.

"It is essential for counsel to wear a gown. That is decided by whom?", asked the CJ.

"See the major religions. Hinduism- Adi Shankaracharya organised it into 10 'maths'- each with different 'tilak', rings, name. There is pluralism- Shaivism, Vaishnavism...These also have denominations- some worship Lord Krishna in the form of a child, some worship Him as a King. In some temples, I can go to worship Shiva in jeans and t-shirt, while somewhere else, I have to wear a 'dhoti'...it was this discipline, morality which was in the mind of the court when they said 'dress'. Otherwise no religion prescribes a dress...", argued the SG.

When the CJ observed that the attire of monks may be stipulated, the SG spoke of Jain monks, with Senior Advocate Rajeev Dhawan mentioned Buddhist monks in Sikkim and Bhutan.

"There is a microscopic minority of Buddhists that says that non-veg is not bad so long as an animal is not killed for it. But you can eat a dead animal", added the SG.

"You are saying that religion governs man's relationship with his creator, that a denomination and the sects can determine how this relationship is to be? A religion can have distinct practices including food and dress. It could have sub-sects which could be religious denominations. And these people have the freedom to decide what practices are essential to them. Impliedly, you are saying that someone outside of that religion cannot decide that?", the CJ sought to clarify.

"Yes. So long as public order, morality or health are not affected. In that case, the government, the Parliament and Your Lordships can decide", replied the SG.

The SG again referred to Article 25(1), repeating that all persons are "equally entitled" (he stressed) to freedom of conscience and the right to freely profess, practise and propagate their religion, adding that every group of persons, however, may not satisfy the definition of religious denomination.

Relying on Shirur Mutt, he advanced that acts done in pursuance of religious belief are also part of religion.

"After doing 'Pooja', generally money is donated in that box kept in the temple. So that is a secular activity? The law can regulate that that money not be used for terrorism or for running casinos?", questioned the CJ. The SG replied in the affirmative.

"Suppose the government makes a law that the money received by way of donations is to be utilised towards running a hospital, then it is a secular activity?", asked Justice Ashok Bhushan.

"Law may insist that sanitation is to be maintained?", suggested the CJ,

"Yes. it may say that there will be a statutory audit every 6 months", agreed the SG.

"Freedom of conscience would include agnostics, 'naastiks'", continued the SG.

"Freedom not to believe!", articulated the CJ.

"In fact, the last sect of Shankaracharya are non-believers! They are yet to decide...!", added the SG.

"Or how many times to do 'namaz' in a day...but if a procession is being taken out, in the interest of public order, the law may dictate that only 500 or 100 persons may be part of it, depending on the topography", concurred the SG.

"IPC can read in to prohibit human sacrifice to feed God under the garb of religion...or, like in the case of Sati", continued the CJ.

"...there is a further right given to the State by sub-clause (b) (of Article 25(2)) under which the State can legislate for social welfare and reform even though by so doing it might interfere with religious practices...", read the SG from Shirur Mutt.

"Dr. Ambedkar said that if we don't allow even law-makers to legislate, then what is once a practice would remain a practice. There would be no reform", iterated the SG.

"Provided the law relates to the secular part of the religious practice", noted the CJ.

"No, even the religious aspect", the SG sought to submit, indicating the aforementioned extract from the 1954 judgment.

"The Article doesn't say so, only the judgment says so", commented the CJ.