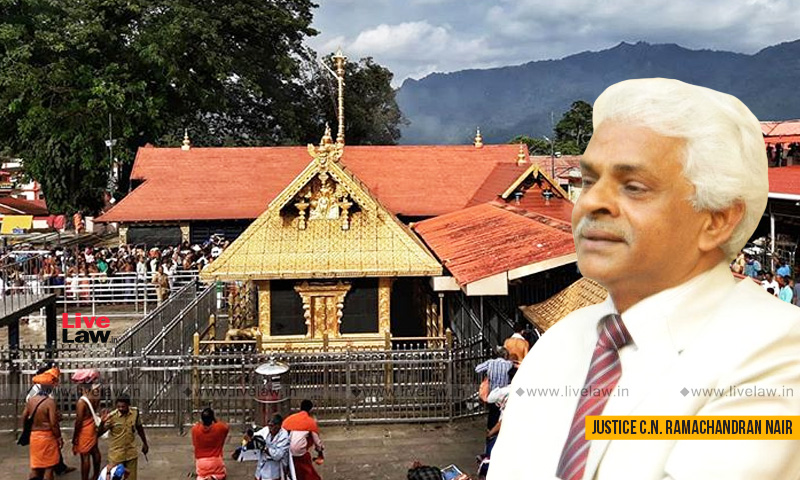 The Supreme Court on Friday appointed retired Kerala HC Judge Justice CN Ramachandran Nair to prepare an inventory of the sacred gold ornaments of Lord Ayyappa at Sabarimala temple and report the same to the SC. The order was passed by a bench headed by Justice N V Ramana in the appeal filed by Revathi Nal P Ramavarma Raja, member of ersthwhile royal family of Pandalam.The bench,...

The Supreme Court on Friday appointed retired Kerala HC Judge Justice CN Ramachandran Nair to prepare an inventory of the sacred gold ornaments of Lord Ayyappa at Sabarimala temple and report the same to the SC.

The order was passed by a bench headed by Justice N V Ramana in the appeal filed by Revathi Nal P Ramavarma Raja, member of ersthwhile royal family of Pandalam.

The bench, also consisting of Justices Ajay Rastogi and V Ramasubramanian, said that in carrying out the task of preparing the detailed inventory, which it required to be handed to the court in a sealed cover in 4 weeks, expert assistance may be sought by Justice Ramachandran Nair.

The Pandalam Royal Family is believed to be the foster family of Lord Ayyappa of Sabarimala temple.

Advocate M S Suvidutt, the new AoR sought to be engaged, asserted that the signature was genuine and stated that the family head was not sick and was even prepared to come to New Delhi.

Certain members of the Pandalam Family who got impleaded in the case submitted that Kerala Government cannot seek inventory of the jewellery in the custody of the family.

However, the bench observed that it was "obvious" that there was a dispute as to whether the jewellery belonged to the Royal Family or the deity Lord Ayyappa. But, that is a larger issue to be resolved after hearing all the parties, said the bench also comprising Justices Ajay Rastogi and V Ramasubramanian.

"Irrespective of whether these items of jewellery belong to the Royal Family or the deity, a proper inventory is a necessity. Since it is not possible for the Court to directly appraise these jewellery, we deem it fit to appoint a retired judge of the Kerala High Court with a request to him to engage the services of a reputed jewel appraiser", the bench observed.

The Court directed the Kerala Government to pay a remuneration of Rs One lakh to Justice Ramachandran Nair as a tentative measure.

Notably, Justice C N Ramachandran Nair headed the bench of the High Court of Kerala which directed in 2011 that the Sree Padmanabhaswamy Temple at Thiruvananthapuram should be taken over by the State Government from the Travancore Royal Family.

Revathi Nal Rama Varma, along with Pandalam Kottaram Nirvahaka Samiti , approached the Supreme Court in 2011 challenging, inter-alia, the findings in a 2006 judgment of the High Court of Kerala that the ownership of the sacred ornaments was with the Devaswom Board and that the family could not claim ownership over the same. In the HC, they had also sought for constituting a Temple Advisory Committee including the members of the Pandalam Royal Family to advise the Devaswom Board in respect to religious and spiritual matters. When these prayer was declined by the High Court, appeal was filed in the Supreme Court.

During the earlier rounds of hearing, the bench led by Justice Ramana had expressed the need to have a special statutory mechanism for governing the Sabarimala temple, which is at present being managed by Travancore Dewasom Board.

On Friday, Attorney General K. K. Venugopal, appearing for the Kerala government, advanced that towards the ends of safety, first and foremost, the exercise of preparing an exhaustive inventory of the ornaments be conducted- "As of now, we have a very basic idea of what all is there. One of the ornaments is simply listed as a diamond item. There is no further information- how many carats it is of, etc...it is necessary that an expert be brought in to appraise all the jewellery so as to ensure they cannot be replaced by fake objects at anytime".

The AG reminded the bench how this maintenance of an inventory had guaranteed the security of the valuables, running into crores and crores of rupees, of the Sri Padmanabhaswamy temple.

However, Senior Advocate K. Radhakrishnan, praying for the custody of the ornaments to be with the senior members of the erstwhile royal family, sought to distinguish the case of the Sabarimala Temple- "The ornaments belong to the royal family, they are not the ornaments of the temple...one branch of the family is saying they belong to them and not to the other sect. We are saying that they are the property of the whole family and not of any particular clan...It has been the age-old practice that once a year, the Raja gives the ornaments to be worn by the deity for the 'Devaprashnam'. It is believed that the Raja is the father of the deity and he takes the ornaments to the Temple to decorate his son on the auspicious day...".

"This involvement of the state in matters of custody, inventory, safety of these sacred ornaments is only the government indirectly encroaching on the private, ancestral property of the royal family!", Radhakrishnan contended.

"This is exactly what had happened in the Sri Padmanabhaswamy temple case also. The Travancore royal family had argued that all the treasures of the temple belonged to them, when in fact they are of the deity and are to lie with the government. There was litigation in that case also", countered the AG.

However, the bench clarified that the court's concern at the moment was not the ownership but only the security of the ornaments.

On February 5, Justice Ramana had expressed the need for having a mechanism for protecting the sacred ornaments of the deity.

Senior Advocate K Radhakrishnan, appearing for the appellants, had submitted that the gold ornaments belong to the Pandalam family and not the temple. As per customary practice, the gold ornaments are taken every year once from the family to the temple for being worn by the deity, he had said.