Sabarimala : Women Seek To Intervene In Review Petitions In Support Of SC Judgment 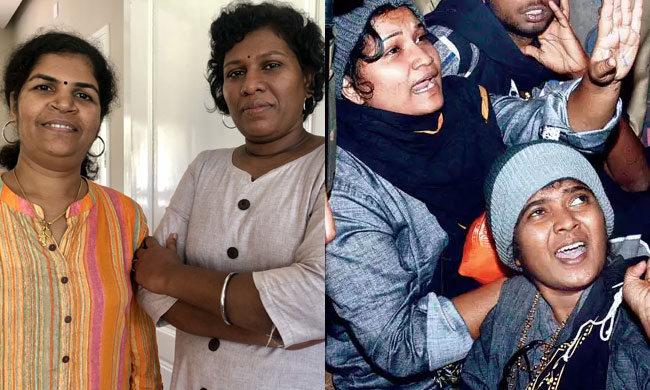 As the Supreme Court Constitution Bench is set to hear the review petitions against Sabarimala judgment tomorrow, four women filed applications today, seeking to intervene in support of the judgment.

Two of the applicants- Bindu and Kanaka Durga- had entered the temple on January 2. Bindu, who teaches law at Kannur University School of Legal Studies, says that she has intense desire to pay her respects to "Dharma Shastha", who is worshipped as Lord Ayyappa. Kanaka Durga, who says that she is a believer of all Hindu gods, narrates in detail the discriminatory practises she had to face during menstrual period, such as isolating her in another room, not permitting her to touch the well or draw water from it etc.

The petition narrates their attempt to enter temple on December 24, which got foiled due to protests. Later, on January 2, they entered the temple with police assistance. They say that the judgment passed by the SC on September 28 needs no interference as it does not have any patent error on its face.

"The judgment of this Hon'ble Court on 28.09.2018 upheld the dignity, liberty and equality of women of all ages and sent a strong message to the society against menstrual taboo", they affirm in the petition.

The other application has been filed by Reshma Nishant and Shanila Satheesh, who are stated to be victims of menstrual taboos. Reshma says that she used to follow the restrictions associated with menstruation until one point of time, by avoiding temple visits and prayers. But, an unexpected occurrence of menstruation while praying at a temple of Lord Shiva changed her attitude and mad her think that "God is all knowing and he has no such dislike for his devotee having a physiological feature". She claims that she had been observing the vrutham during mandala pilgrimage seasons of all years since 2006,with desire to worship Lord Ayyappa.

Shanila also says that she had to face intense discrimination based on menstruation. "The taboo and the social boycott from social functions, festivals, worships etc.are very painful which cannot be explained in words", says Shanila.

They also made attempts to enter temple, but had to back off due to violent protests. They say that the Court's judgment is "one of the most progressive in the recent history as it addressed one of the most fundamental discrimination meted out to women on account of their physiological features"

"There are thousands of women waiting for Darshan at Sabarimala and are awaiting the final outcome of the Review petitions", states their petition.

On January 17, the apex court had ordered grant of round-the-clock police protection to Bindu and Kanaka Durga, following their plea that they were facing aggressive threats to life after their temple visit.