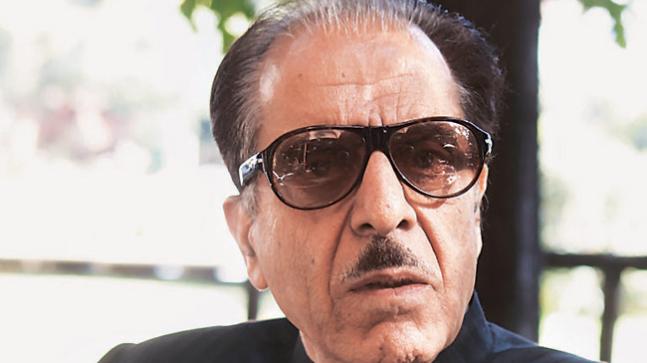 The Supreme Court on Wednesday stated that the habeas corpus petition filed on behalf of octogenarian Congress leader and former Union Minister Prof. Saifuddin Soz cannot be entertained in view of the counter-affidavit filed by Jammu and Kashmir administration which stated that no detention order has been passed against him.Taking on record Jammu and Kashmir administration's statement that...

The Supreme Court on Wednesday stated that the habeas corpus petition filed on behalf of octogenarian Congress leader and former Union Minister Prof. Saifuddin Soz cannot be entertained in view of the counter-affidavit filed by Jammu and Kashmir administration which stated that no detention order has been passed against him.

Taking on record Jammu and Kashmir administration's statement that former Union minister Saifuddin Soz was never placed under detention and was free to go wherever he wanted to go, a bench comprising Justice Arun Mishra, Vineet Saran and MR Shah disposed of the plea without granting any relief.

After the Court disposed of the plea, a report by NDTV emerged claiming that Soz was still under detention, contrary to the claims of the administration.

In the video, Soz was seen shouting "Let Supreme Court see how I am being detained".

Watch | Saifuddin Soz kept behind locked gates in his home, shouts "Let Supreme Court see how I am being detained" pic.twitter.com/nhRi1LE0Vf

Sharing the NDTV video in Twitter, Congress MP Shashi Tharoor said "The continued detention of octogenarian former Union Minister Saifuddin So is a national disgrace. Why can't the SC demand the Govt justify it or relase him?"

The continued detention of octogenarian former Union Minister Saifuddin Soz is a national disgrace. Why can't the SC demand the Govt justify it or release him? https://t.co/niquDyu8Ig

On Wednesday, Senior Advocate Dr. Abhishek Manu Singhvi, appearing in the petition, submitted to the Court , "One fine day in August, you put me under detention. Now in their Counter, they say that I am not under detention and that I'm free".

To this, Justice Mishra remarked that the Counter averred that Prof. Soz had travelled outside J&K. Dr. Singhvi responded that the Petitioner had been unwell, and had only travelled for medical reasons.

Refusing to address any other submissions of Singhvi, the Bench proceeded to dispose of the matter in view of the Counter Affidavit which stated that "no such order [pertaining to detention of Prof. Soz] has ever been passed".

The habeas corpus petition, filed by Advocate-on-Record Sunil Fernandes, on behalf of Prof. Soz's wife, Mrs. Mumtazunnisa Soz, stated that "ten months have passed since his first detention and he is yet to be informed of his grounds of detention. All efforts by him to obtain a copy of the detention order(s) have been of no avail due to the illegal, arbitrary exercise of powers by the Respondent No. 2".

The plea further contended that the detention was wholly contrary and perverse to the constitutional safeguards laid down under Articles 21 and 22 of the Constitution of India, as well as the law on preventive detention. It was further in contravention of the statutory scheme of the J&K Public Safety Act, 1978, under which the detention order had been purportedly passed.

It was further contended that the authority has  refused to supply a copy of the detention order, despite repeated requests by the detenu, failing which the detenu has been put under detention for a prolonged period with no recourse under law, the plea said

However, in a denial of the contentions placed in the habeas corpus plea, the J&K Home Department filed a Counter Affidavit, claiming that the Petitioner had never been detained, nor put under any house arrest. It further stated that there was no question of provision of detention order as no such order had been passed in the first place.

Averring that the submissions in the plea were "false, frivolous and baseless", the Counter also alluded to two instances of Prof. Soz having travelled outside J&K by air in 2019. Additionally, the claim that the Station House Officer of Budgam had visited the Petitioner's residence to instruct the security guards about the alleged detention was also denied by the J&K Home Department.

The affidavit stated that Soz is a "categorized protectee" in view of the developments after the abrogation of special status of J&K on August 5 last year, and police personnel are deployed at his house for his protection.

"It is submitted that by virtue of being a categorized protectee, Prof. Saifuddin Soz has been provided with round the clock armed guards and Personal Security Officers from Jammu Kashmir police.  Further, whenever he goes out for his personal, political or official assignments, he travels in Government Bullet Resident Vehicle with other Government vehicles that are included in the cavalcade during his movement as a part of security protocol...

As a categorized protectee, residential guard and access control stands deployed at the residence of Prof. Saifuddin Soz. The petitioner is also provided personal security cover in the form of one PSO from the Security Kashmir for her protection", the affidavit stated. 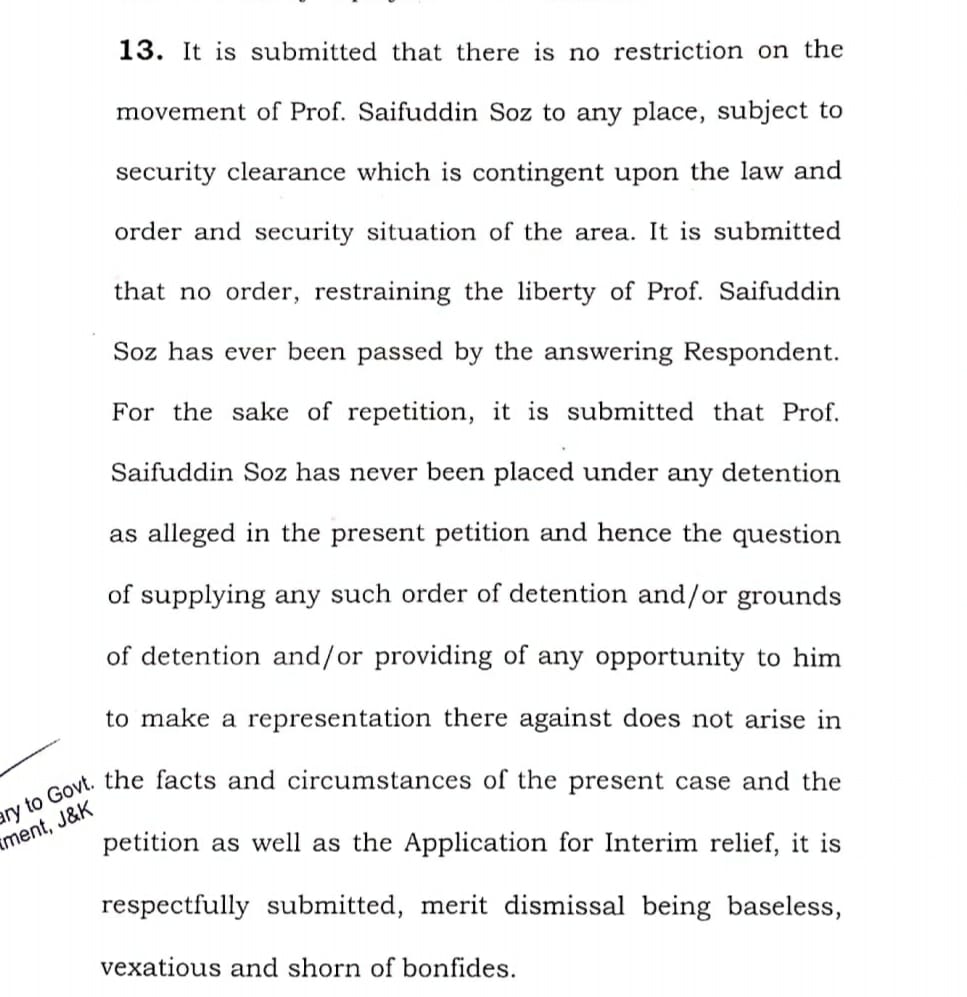 Soz has been re-elected numerous times for the Lok Sabha and also served as Union Minister besides being the President of the Jammu & Kashmir Pradesh Congress Committee for quite some time, it said, adding that he was never threat to the peace.