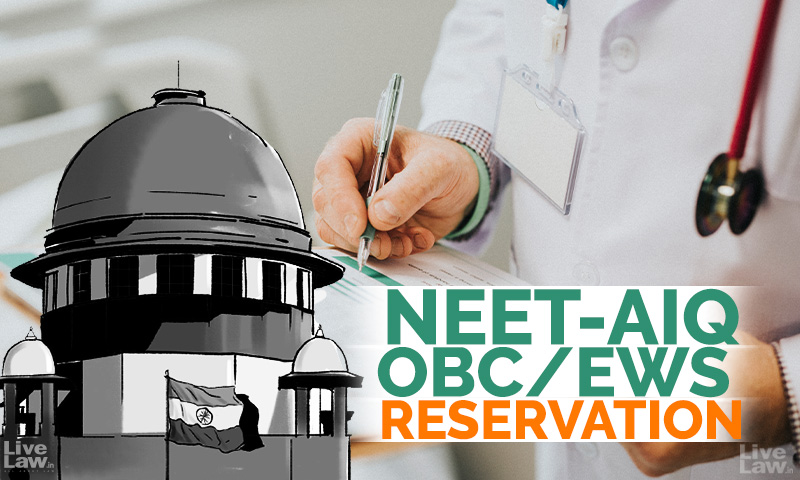 Pursuant to Top Court's order asking Centre to apprise the Court of the reasons for with its decision to adopt the criteria of annual income of Rupees 8 lakhs for determining the eligibility for Economic Weaker Sections ("EWS") in the NEET All India Quota, the Central Government today filed an affidavit justifying its stand.The Union Ministry of Social Justice and Empowerment said in...

Pursuant to Top Court's order asking Centre to apprise the Court of the reasons for with its decision to adopt the criteria of annual income of Rupees 8 lakhs for determining the eligibility for Economic Weaker Sections ("EWS") in the NEET All India Quota, the Central Government today filed an affidavit justifying its stand.

The Union Ministry of Social Justice and Empowerment said in its affidavit that the determination of EWS category is the result of serious consideration that had already taken place to determine the criteria in the context of OBC's. It further stated the the adoption of the same income criteria for OBC creamy layer and EWS is not

The affidavit has been filed in the writ petitions challenging Centre's notification of granting 27% reservation for OBC and 10% for EWS in 50% All India Quota seats in admission to medical courses.

SUBMISSIONS IN THE AFFIDAVIT

A. Exercise Undertaken By The Union Government For Determination Of EWS Category With Reference To Major General Sinho's Report

On this aspect, Centre has further submitted that,

"Even before the Office Memorandum dated January 17, 2019 was in existence in the context of identification of Economically Backward Classes ("EBC") , the Government had set up the Major General Sinho Commission in the year 2005. This Commission had by its report of July 2010, arrived at various conclusions including the criteria to identify "creamy layer" amongst OBC's could well serve as a basis to decide the upper limit or as a criterion for identifying EBC families amongst the General Category as well. Alternatively the Commission recommended that BPL families from the General Category whose annual family income from all sources is below the taxable limit (as may be revised from time to time) may be identified as EBCs."

Relying on the Government of India's Office Memorandum dated September 8, 1993 based on which income tax limit of Rs 1 lakh that was fixed, Centre has submitted that this limit (Rs 1 lakh) has been raised from time to time on the basis of cost of living and at present the same stands at Rs 8 lakhs per annum.

"In the year 2016 the upper-income limit for determination of Creamy Layer in respect of OBCs was Rs 6 lakhs per annum. In order to maintain the same living standard in 2017, the same was adjusted to Rs 8 lakhs on the basis of Consumer Price Index. As the CPI had increased from 197 (December, 2011) to 268 (March, 2016), the multiplier was 1.36. Therefore to maintain the same standard of living, the income limit of Rs 6 lakhs was multiplied with 1.36 to arrive at 8.16 lakhs which was rounded off to Rs 8 lakhs," Centre has submitted.

"Once such an exercise had already been done, the Government of India has adopted the same financial criteria. It is reiterated that although the Sinho Commission Report is one of the aspects taken into consideration while arriving at a policy decision to provide reservation to EWS of the society and the income criteria now fixed is not on the sole basis of the Major General Sinho Commission Report," the affidavit states.

B. The Determination Of EWS Category Does Not Suffer From Over Inclusiveness

Submitting that any criteria based on a cut off is likely to have some degree of assumption, the centre in its affidavit has stated that the determination of EWS category in terms of the Office Memorandum dated January 17, 2019 is not over inclusive and ought not to be interfered with.

"The fixation of 8 lakh as income criteria is on the basis of the criteria detailed in the affidavit after taking into consideration the criteria for determining the creamy layer of OBCs. Further even the Major General Sinho Commission had recognised that the very same test can also be applied for determining EWS. To provide further checks so as to ensure that only the needy get the benefit of Article 15(6) and Article 16(6) reservations, the office memorandum dated January 17, 2019 provides further exclusions," centre has further submitted in this regards.

C. Fixation Of Same Income Limit for OBC And EWS Category Is Not Arbitrary

"The exercise conducted to determine the Creamy Layer for the purpose of OBC reservation would be equally applicable for determination of EWS category since the fundamental premise is that if a person/his family have a substantial economic standing, he/she may not require the benefits of reservation at the cost of others. It is reiterated that even the Major General Sinho Commission had suggested that, "extending the existing criteria to identify "creamy layer" among OBCs could well serve as to decide the upper limit or as a criterion for identifying EBC families among GC too."

Emphasising on the exclusionary criteria for the purpose of determining EWS category provided in the Office Memorandum dated January 17, 2019 Centre has stated that, "Once the criteria is exists and decision is taken on the basis of some material including suggestions by Major General Sinho as to what cut off criteria is to to be provided, the same is largely within the realm of government policy."

D. Cost Of Living Within The City And State Varies In Different Parts; Broad Criteria As Applicable To Country Alone Has To Be Taken Into Consideration

On the aspect of whether differences in GDP/per capita income of different States, purchasing power between rural and urban areas have been accounted for while arriving at Rs 8 lakhs income limit, Centre has submitted that determination has to be made on broad probabilities and it is impossible to achieve perfection/mathematical precision.

Stating that no separate criterion has been fixed for rural and urban areas, Centre in their affidavit has stated that,

"While there is a difference in purchasing power between rural and urban areas, in the sections which are intended to be under EWS reservation-namely students in higher educational institutions and for employment, there is constant migration from rural to urban areas. This factor of migration, especially for studies, would obviate the need for separate income criteria for rural and urban areas."

E. Basis For Asset Exception Contained In Office Memorandum Was Intended To Ensure That Benefits Of EWS Reservation Reaches Only The Needy

On the aspect of asset exception, Centre has submitted that the same was initiated after due discussion which was approved by the Cabinet initially on January 7, 2019 and finally on February 2, 2019.

"The distinction between metropolitan and non metropolitan areas is taken into consideration as is evident from the reference to "agricultural lands", "municipalities" and "residential flats," Centre has stated.

Centre in their affidavit has also submitted that the entire attempt of the petitioners is to deprive the eligible EWS candidates and to corner the entire seats contrary to the Constitutional mandate and obligation.

Defending the notice, centre in this regards has stated that "The entire process of issuing the impugned notice is with a view to provide reservation to EWS in the society. In order to ensure that the provision of reservation in terms of the 103rd Constitutional Amendment would not prove the detriment of other General Category students, the total number of seats available has been drastically increased by 56% in the last 6 years in respect of MBBS seats and 80% in the last 6 years in respect of PG seats. In the absence of reservation as envisaged in the notice, EWS students are not getting the benefit of reservation and inspiTe of the increase in the number of seats."

With regards to petitioner's contention that the reservation for EWS would violate the law laid down by the Top Court in Indra Sawhney's case on account of total reservation exceeding 50%, Centre has submitted that the same is subject matter of reference to Constitution Bench of the Top Court in Janhit Abhiyan v. Union of India and Ors (WP(C) 55/2019).