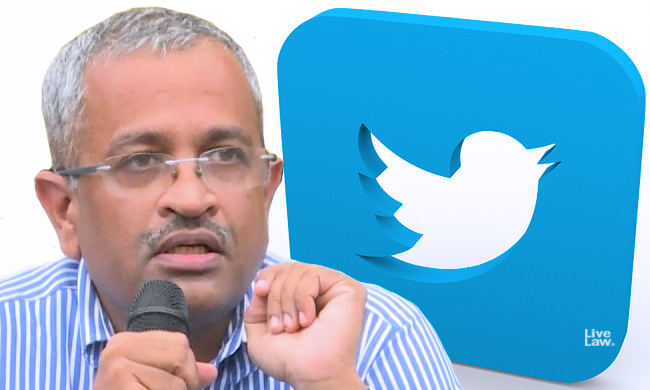 Senior Advocate Sanjay Hegde, whose twitter account was suspended twice in October this year, has moved the Delhi HC Court seeking directions to the Ministry of Electronics and Information Technology to frame guidelines to ensure that any censorship on social media is carried out strictly in accordance with the provisions of Article 19 of the Constitution.

In his plea Hegde has contended that Twitter being private body which performs a public function is amenable to the jurisdiction of the Court under Article 226 of the Constitution.

"'Twitter' serves as a medium for citizens the Petitioner to communicate their grievances and concerns with elected officials and government representatives. It serves as the "marketplace of ideas", that was alluded to in Justice Holmes dissent in Abrams v. United States, 250 US 616 (1919) and subsequently by the Indian Supreme Court in Shreya Singhal v. Union of India, (2015) 5 SCC 1. It therefore performs a public function and is amenable to the jurisdiction of this Court under Article 226," he submitted.

Highlighting the importance of social media in exercise of fundamental right to freedom of speech and expression, the petition stated :

"Social media includes web-based sites for social networking and microblogging, through which users can create communities to share information, ideas, personal messages etc. Unlike any other medium of communications (such as radio, television and printed publications), which are based on one-way transmission of information, platforms such as Twitter, facilitate participatory information sharing and collaboration. Users are not passive recipients, but active publishers of information. By enabling individuals to exchange information and ideas instantaneously and inexpensively across national borders, social media sites allow access to information and knowledge that was previously unattainable. This, in turn, contributes to the progress of society as a whole"

He submitted that Section 79 (2) (c) read with Section 87 (2) (zg) of the Information Technology Act authorize the Central Government to prescribe guidelines for intermediaries; and while the government has laid down guidelines regarding when content is to be taken down, no guidelines to ensure that legal speech is not censored have been laid down.

Citing depiction of "hateful imagery", Twitter had blocked Hegde's account on October 27, for posting the picture of August Landmesser wherein he refused to the Nazi salute at a rally, when everybody around him was doing it; a picture Hegde claims has been up for several months as his cover photo. He also contended that the post did not violate any of the Twitter's posting norms.

Following a massive virtual uproar in Hegde's favour, Twitter had restored his account the next day, only to block it again, this time for sharing the poem titled "Hang Him". Hedge said that the said post dated back to 2017, where he had retweeted the poem posted by Kavita Krishnan, which dealt with the hanging of two peasant revolutionaries in Independent India.

He pointed out that the social media giant had arbitrarily acted against him by suspending his account for merely re-sharing a tweet; while the original tweet subsisted without any consequences.

"arbitrariness of Respondent No.2's conduct is clear from the fact that while the Petitioner's account was suspended for sharing a post/tweet by another user, no action has been taken against the user who wrote the original tweet. The same continues to be in public domain. It is pertinent to note that after the Petitioner's account was suspended, there was an outcry on traditional as well as social media. Many twitter users shared the picture of August Landmesser as well as the poem by Gorakh Pandey on their timelines, as a way to protest against the arbitrary and illegal actions of Respondent No.2. However, no action was taken against any of these users by Respondent No.2," the plea read.

He has contended that the company has violated his right to freedom of speech and expression, as guaranteed under Article 19 of the Constitution. Stating that arbitrary 'take-downs' or suspensions, such as the instant one, have a chilling effect on free speech, he stressed on the importance of social media as a tool for the exercise of civil rights.

He added that social media, particularly Twitter, enables users to reach out to government functionaries, including ministers at times of distress. Similarly, the State also often uses the platform to conduct official business. This being the case, he submitted, it was "incumbent" on the State to ensure that access of citizens to such media is not illegally blocked.

"Indian Jurisprudence recognizes that the freedom of speech includes the freedom to communicate or circulate one's opinion without interference to as large a population in the country, as well as abroad, as is possible to reach. The Court in…Secy., Ministry of Information & Broadcasting, Govt. of India v. Cricket Assn. of Bengal, (1995) 2 SCC 161 has taken note of the importance of "modern communication mediums" to a healthy democracy," the plea read.

He added that access to social media was also crucial from the perspective of right to assembly and the right to association, as guaranteed by the Constitution.

"Citizens (including the Petitioner) and civil society have used social media for social and political causes. There are many examples of like-minded citizens rallying for a cause or coming together informally, whether in a geographical location or across borders, utilising growing access to the internet," he asserted.

He urged that regulatory guidelines were also essential because India is a signatory to ICCPR which recognizes and protects internet based speech. Article 19(2) of the ICCPR states,

"Everyone shall have the right to freedom of expression; this right shall include freedom to seek, receive and impart information and ideas of all kinds, regardless of frontiers, either orally, in writing or in print, in the form of art or through any other media of his choice."

Earlier, Hegde had served a legal notice upon the company and had also approached the Union Law Minister seeking guidelines on social media censorship.

The plea has been drawn by Advocate Pranjal Kishore.