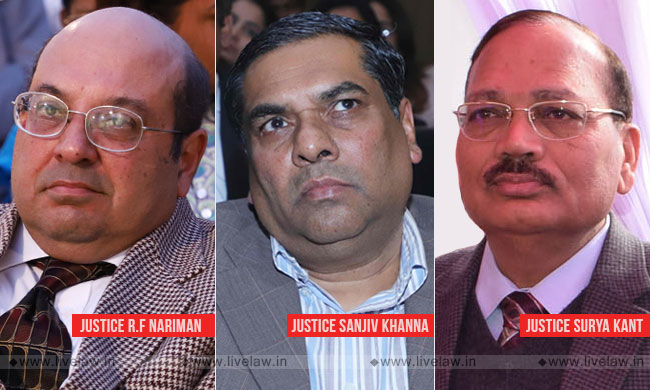 Dismissing a bunch of petitions filed by nearly 200 realtors, the Supreme Court on Friday upheld the amendments made to the Insolvency and Bankruptcy Code in 2018 to treat homebuyers as financial creditors.In the judgment titled Pioneer Urban Land and Infrastructure Ltd and Anr vs Union of India, the bench of Justices R F Nariman, Sanjiv Khanna and Surya Kant held that the amendments do...

Dismissing a bunch of petitions filed by nearly 200 realtors, the Supreme Court on Friday upheld the amendments made to the Insolvency and Bankruptcy Code in 2018 to treat homebuyers as financial creditors.

In the judgment titled Pioneer Urban Land and Infrastructure Ltd and Anr vs Union of India, the bench of Justices R F Nariman, Sanjiv Khanna and Surya Kant held that the amendments do not violate Article 14 and 19(1)(g) of the Constitution and rejected the argument that they are 'arbitrary, unreasonable, excessive and disproportionate'.

The challenge was primarily to the explanation added to Section 5(8)(f) of the Code that "any amount raised from an allottee under a real estate project shall be deemed to be an amount having the commercial effect of a borrowing". Amounts having the commercial effect of borrowing are treated as 'financial debt' as per Section 5(8)(f). Therefore, any amount invested by a person in a real estate project for allotment of apartments will be deemed as "financial debt".

The bench noted that the amendments were carried out based on the report of the Insolvency Law Committee. The report suggested the amendment in the backdrop of the crisis in Jaypee and Amrapali projects. In Chitra Sharma case, the Supreme Court had permitted Jaypee allottees to participate in the meeting of Committee of Creditors.

"The Insolvency Law Committee found, as a matter of fact, that delay in completion of flats/apartments has become a common phenomenon, and that amounts raised from home buyers contributes significantly to the financing of the construction of such flats/apartments. This being the case, it was important, therefore, to clarify that home buyers are treated as financial creditors so that they can trigger the Code under Section 7 and have their rightful place on the Committee of Creditors when it comes to making important decisions as to the future of the building construction company, which is the execution of the real estate project in which such home buyers are ultimately to be housed", Court observed.

The realtors argued that homebuyers can at best be regarded as operational creditors and not financial creditors.

The judgment by Justice Nariman stated the following on this point :

In the case of real estate developers, the developer who is the supplier of the flat/apartment is the debtor inasmuch as the home buyer/allottee funds his own apartment by paying amounts in advance to the developer for construction of the building in which his apartment is to be found.

One other important distinction is that in an operational debt, there is no consideration for the time value of money – the consideration of the debt is the goods or services that are either sold or availed of from the operational creditor. Payments made in advance for goods and services are not made to fund manufacture of such goods or provision of such services"

"It is these fundamental differences between the real estate developer and the supplier of goods and services that the legislature has focused upon and included real estate developers as financial debtors. This being the case, it is clear that there cannot be said to be any infraction of equal protection of the laws."

No treatment of unequals as equals

In this regard, the Court said :

"So far as unequals being treated as equals is concerned, home buyers/allottees can be assimilated with other individual financial creditors like debenture holders and fixed deposit holders, who have advanced certain amounts to the corporate debtor.

For example, fixed deposit holders, though financial creditors, would be like real estate allottees in that they are unsecured creditors. Financial contracts in the case of these individuals need not involve large sums of money. Debenture holders and fixed deposit holders, unlike real estate holders, are involved in seeing that they recover the amounts that are lent and are thus not directly involved or interested in assessing the viability of the corporate debtors."

"Thus, allottees, being individual financial creditors like debenture holders and fixed deposit holders and classified as such, show that they within the larger class of financial  reditors, there being no infraction of Article 14 on this score"

The petitioners argued that the term "borrowing" implied taking a loan for a temporary period with the intention of returning it back with interest. So, advance by homebuyers cannot be regarded as loan since they are expecting a flat in return and not money with interest, argued the petitioners.

Rejecting this, the Court observed :

"Also of importance is the expression "commercial effect". "Commercial" would generally involve transactions having profit as their main aim. Piecing the threads together, therefore, so long as an amount is "raised" under a real estate agreement, which is done with profit as the main aim, such amount would be subsumed within Section 5(8)(f) as the sale agreement between developer and home buyer would have the "commercial effect" of a borrowing, in that, money is paid in advance for temporary use so that a flat/apartment is given back to the lender"

RERA only a parallel remedy

Referring to Section 88 of the RERA Act, the Court said that it was an additional remedy, which will not bar other remedies available to a homebuyer. The Code and RERA operate in completely different spheres.

The conclusions of the judgment are :