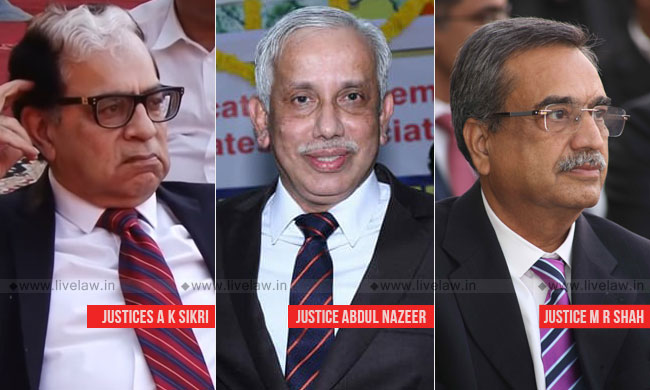 The Supreme Court on Monday acquitted three persons who were sentenced to death by it in 2009, and also three others whose death penalty was confirmed by it.

The bench comprising Justice AK Sikri, Justice S. Abdul Nazeer and Justice MR Shah, also ordered the State of Maharashtra to pay Rupees 5 Lakh as damages to each of them.

Ankush Maruti Shinde, Rajya Appa Shinde, Ambadas Laxman Shinde, Raju Mhasu Shinde, Bapu Appa Shinde and Surya alias Suresh were accused of committing five murders and raping a lady (who survived) and a child of 15 years of age (who died). The Trial Court convicted all of them and sentenced them to death.

In the appeals filed by them, the Bombay High Court set aside death penalty awarded to three of them and instead sentenced them to life imprisonment. While for the remaining three, the death sentence was confirmed.

The Supreme Court bench comprising of Justice Arijit Pasayat and Justice Mukundakam Sharma, in 2009, not only dismissed the appeals filed by the three whose death sentence was confirmed by the High court, but also allowed State's appeal and sentenced the other three to death sentence. The Supreme Court had found the crime to be cruel and diabolic. It had observed that the collective conscience of the community was shocked; the victims were of a tender age and defenseless; the victims had no animosity towards the accused and the attack against them was unprovoked. Considering these factors,it had awarded the death penalty to all the accused .

In 2010, review petitions filed by three accused were dismissed by the Supreme Court.
In February 2014, a bench of Justices A.K. Patnaik and Ibrahim Kalifulla admitted the review petitions filed by the other three death convicts, accepting the arguments of Senior Advocate Soli Sorabjee that it was decided relying on a wrong precedent- Ravji alias Ram Chandra v. State of Rajasthan [(1996) 2 SCC 175]. It was argued that Ravji's case and the six subsequent cases in which Ravji was followed were decided per incuriam, as the law laid down therein is contrary to the law laid by the Constitution Bench of the Supreme Court in Bachan Singh.
In 2016, the three accused, whose review petitions were dismissed in 2009, filed applications for reopening the review petitions, in the light of constitution bench judgment in Mohd. Arif v Registrar, Supreme Court of India.

In October 2018, considering the review petitions and the applications, a three Judge Bench headed by Justice Kurian Joseph had recalled the 2009 Judgment and the Appeals were restored.