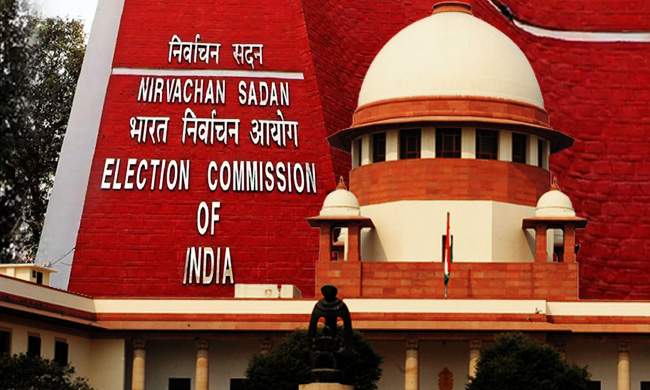 The Supreme Court bench headed by Chief Justice S A Bobde on Tuesday agreed to list after four weeks the PIL seeking greater autonomy to Election Commission for free and fair elections.

The PIL filed by advocate and BJP leader Ashwini Upadhyay also sought directions for the appointment of Election Commissioners by a collegium of Prime Minister (PM), Chief Justice of India (CJI ) & Leader of Opposition (LOP).

Advocate Shrutanjay Bhardwaj mentioned before the bench for early listing of the PIL saying "the matter was last heard in September 2018 and the order was to list the matter after eight weeks for final disposal but the PIL was not listed since then."

Petitioner alleges that the injury is caused to the public because ECI cannot function independently until the CEC & ECs are protected similarly, its expenditure is charged as consolidated fund and has independent secretariat & rule making authority.

"That the CEC and ECs enjoy the same decision-making powers, which is suggestive of the fact that their powers are at par with each other. However, Clause (5) of the Article 324 does not provide similar protection to the ECs and it merely says that the ECs cannot be removed from office except on the recommendation of the CEC".

The Petitioner submitted that Article 324(5) of the Constitution was specially incorporated to ensure the independence of the Election Commission and to free it from any Political or Executive interference. It expressly provides that "the Chief Election Commissioner shall not be removed from his office except in like manner and on the like grounds as a Judge of the Supreme Court". But, proviso specifies that the ECs shall not be removed from office except on the recommendation of the CEC, which is arbitrary and irrational.

"The Election Commission time and again in its various correspondence and reports has expressly opined that the current wording of Article 324(5) is "inadequate" and requires an amendment to bring the removal procedures of ECs at par with the CEC to provide them with the "same protection and safeguards" as the CEC".

Prayers in the Petition;

b) direct the Central Government to take appropriate steps to provide independent secretariat to the Election Commission of India and declare its expenditure as charged on the consolidated fund of India on the lines of the Lok Sabha / Rajya Sabha secretariat;